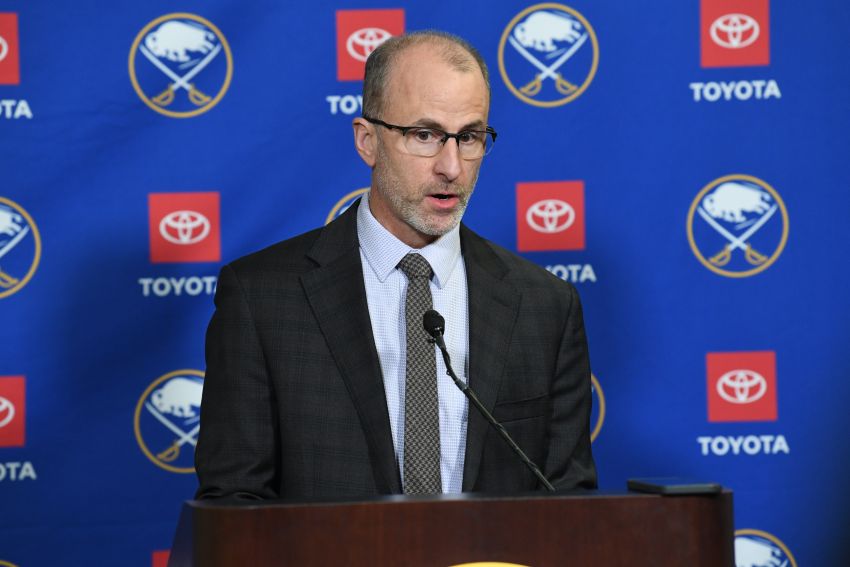 Dan Granato believes the Sabres are on the right path. ©2022, Micheline Veluvolu

BUFFALO – These days, Don Granato acknowledged he often struggles to remain patient on the inside. Having coached for decades, he sees the Sabres, despite their meager results this season, are finally on the right path.

Following years of futility, the Sabres have acquired a stable of elite young players and assembled a group that has bought into the team’s plan and plays for each other.

One of their best prospects, winger Jack Quinn, 20, made his NHL debut Tuesday’s 6-1 loss to the Tampa Bay Lightning at KeyBank Center.

“I see where we’re going, and that gives me a lot of confidence,” Granato said prior to Tuesday’s game. “There’s reason to be confident. This is going to correct. There’s no doubt about it. We’ve been able to convey that logically enough to our players that they see it, they feel it. And when you know it, you just know that we’re gonna turn this thing, you get really impatient. You want more now and you want it faster.”

Wins have been difficult to earn for more than two months. The last time the Sabres faced the Lightning on Oct. 25, they downed the defending Stanley Cup champions 5-1, improving their record to 4-1-1. They’re just 6-18-5 since their torrid start.

Still, Granato sees positives. His players have developed a clear understanding of their expectations and embrace them. He believes their belief remains strong.

“The vision is clear to me, I think that’s probably the biggest reason we’re confident,” Granato said. “The guys have a clear vision of what we’re doing every day and how we can succeed. You lose a game, you feel like there were so many reasons and things that were in our control that we could have executed to win that game. There’s no feeling of being overwhelmed. Zero out of our guys. When we get scored on or we don’t have a favorable outcome, our guys immediately take ownership to the point where they have clarity.

“Like, we know what we did or didn’t do and, again, it wasn’t the other team that did it to us. We do see that, we do feel that, and it’s a lot of young guys that are going to be very good players in this league for a long time and I think everybody sees and feels that. So it’s almost, underlying all that I can tell you there’s a real excitement for, ‘When is this gonna turn?’ Because it’s inevitable. It’s going to turn. And I think that keeps everybody really focused and engaged in practice, engaged in meetings, and actually loving to play games.”

“He is feeling good,” Granato said. “He feels very confident. And … he looks different. He feels different. You can see that his confidence level is really good and very encouraging.”

Mittelstadt, 23, suffered an upper-body injury opening night and did not return until Dec. 2. After playing just three games, he was injured again.

Granato said Friday that Mittelstadt is still weeks away from returning.