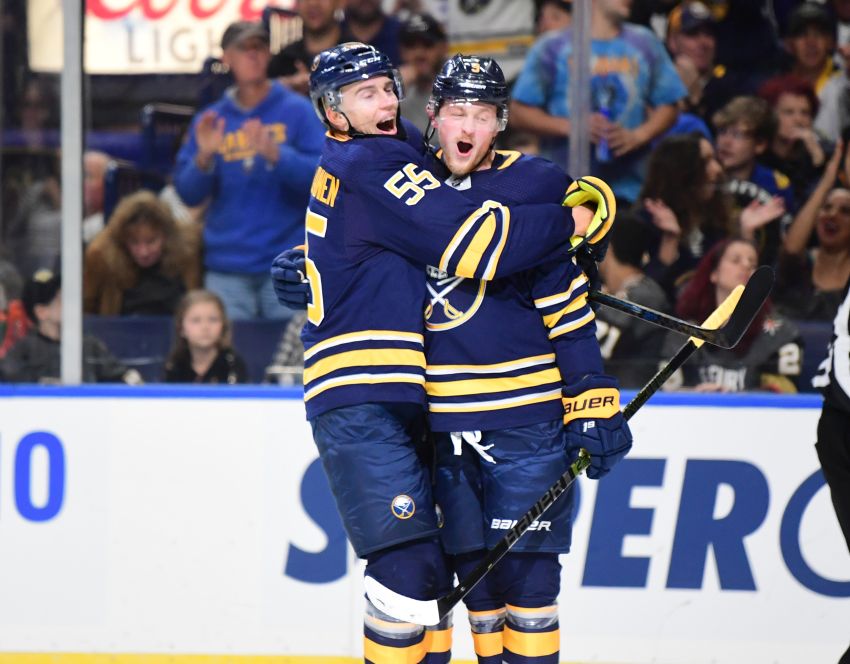 BUFFALO – The last time the Sabres were above .500, their captain, center Jack Eichel, was a junior in high school. Phil Housley hadn’t entered the pro coaching ranks yet. Their top draft pick, defenseman Rasmus Dahlin, was 12.

Only one player, winger Jason Pominville, is around from the last time the Sabres sported a winning record. Of course, Pominville spent more than four seasons with the Minnesota Wild before Buffalo reacquired him last year.

Monday afternoon’s 4-2 win against the Vegas Golden Knights before 16,004 fans inside KeyBank Center improved the Sabres to 2-1 this young season.

For most teams, that mark would hold little significance. Heck, the season isn’t even a week old. But for the Sabres, who have finished dead last three times in five years, it means a whole lot.

The Sabres hadn’t been above .500 since starting a lockout-shortened 48-game campaign 2-1 in January 2013. Incredibly, they went a stunning 458 contests without a winning record.

“We talked about it before the game, it’s obviously been a while,” Pominville said. “It’s nice to get off to a good start. It’s really, really early. But guys have put in the work throughout the summer, throughout training camp.

“It’s a different vibe, different atmosphere. It’s definitely nice to be able to get the start we have.”

Eichel, who scored two goals, said: “You know what? It’s a good start. We have a lot of work to do … but I like the direction our group is going in right now.”

Becoming the NHL’s laughingstock clearly embarrassed the Sabres and forced some players to change.

“You just feel it … there’s a fire in everybody, everyone’s coming to the rink ready to work every day and practice,” said Sabres defenseman Marco Scandella, who scored his first goal this season. “We’re getting better every day.”

But the Sabres looked no better than last season on Thursday, quickly drawing the ire of their fans.

“They swallowed some pride against Boston,” Sabres coach Phil Housley said. “They came back to work the next day, they refocused. Obviously, there’s a lot of things that we still need to clean up. But it’s a credit to them, they’ve put the work in and now they’re getting results, which is great for their confidence.”

If the Sabres keep winning and showcase the improvements they’re supposed to, it will likely be because Eichel, 21, is leading the way.

After scoring an empty-net goal in Saturday’s 3-1 win against the New York Rangers, he looked dynamic much of Monday.

The Sabres botched an early power play, generating little. But during their second opportunity, Eichel unleashed a wicked one-timer from the left circle, perfectly converting defenseman Rasmus Ristolainen’s pass at 14:31.

“I started maybe a little bit slow and I think that power play goal is a good one for me, it gets me going,” Eichel said.

Housley said: “Risto put that right in Jack’s wheelhouse. He really hammered it.”

Then 4:58 into the second period, Eichel grabbed winger Sam Reinhart’s pass alone in front and backhanded the puck in.

“He’s doing the right things, he’s leading by example, he’s making the right decisions with the puck,” Housley said. “I know the first game he tried to do too much. He’s trusting his teammates now.”

Pominville scored the other goal. As the Sabres’ oldest and most experienced player, he understands the new feeling around the club isn’t the result of two straight wins.

“It’s easy to say when we’re winning games,” Pominville said. “But I think that kind of started before training camp, everyone was here early, everyone was skating together, the buzz around the town. …