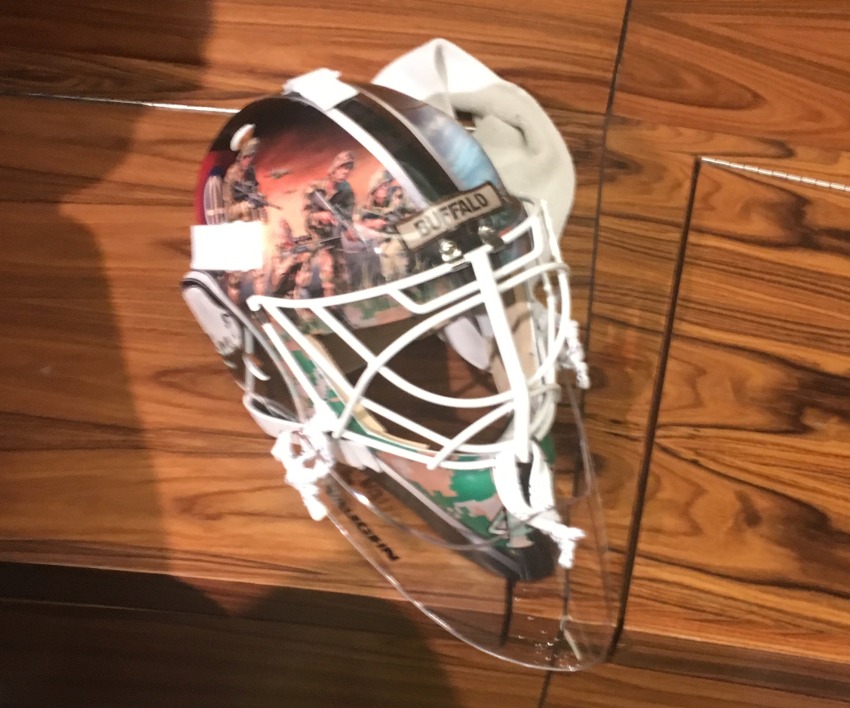 BUFFALO – Robin Lehner grabbed the new mask he plans to debut for Military Appreciation Night, showed the soldiers and camouflage painted on the front and then turned it around.

At the bottom of the back plate, the Sabres goalie had “Trump” painted on with a small picture of the President-Elect.

“Got a little support for my man Trump here,” the Swede said this afternoon inside KeyBank Center. “It’s going to be a fun night.”

Why does Lehner admire Trump?

Trump, of course, is a polarizing figure. His views can be read about elsewhere. When the Times Herald tried to ask Lehner more about Trump, he replied, “I’m not going to talk politics with you.”

Lehner, 25, clearly has a deep respect for the military. He’s lived on and off in the United States for six years.

“Even though I’m not American, I appreciate what the military and all these guys do,” Lehner said.

He added: “It’s something you got to show respect for all the people serving.”

Lehner believes hockey players are “the lucky ones.”

“We get to do something we love day in and day out,” he said. “It’s because of people like that we’re able to do that.”

“He’s got other things on there that he’s honoring, paying tribute to,” he said.

Lehner said he won’t play Friday against New Jersey. He practiced with the mask today.