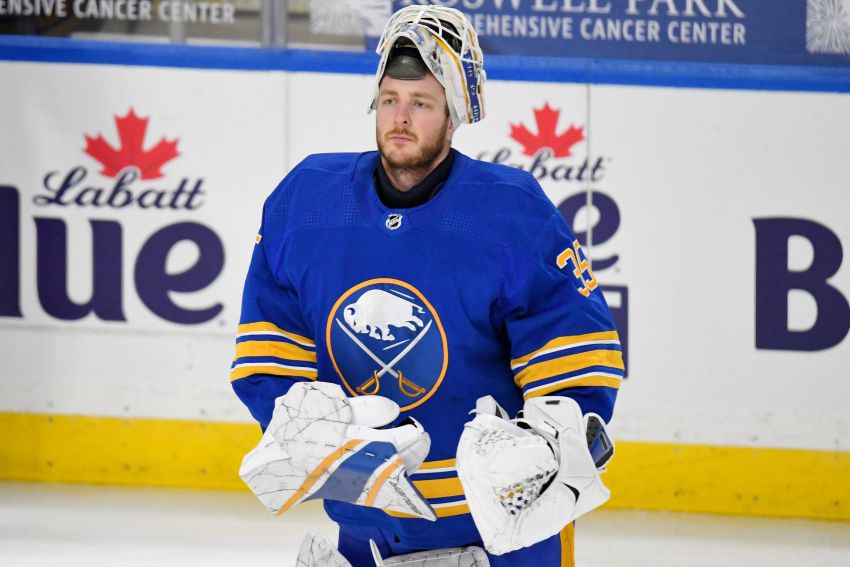 Ullmark, whose father entered the hospital early last week, was scheduled to start Monday against the Philadelphia Flyers. After the morning skate – “I had my worst pregame skate in my whole life, probably,” – he told Sabres.com – he checked his phone and saw a missed call from his mother.

When he spoke to her, he learned his father had passed away. He was 63.

Ullmark, who was scheduled to start that night, told Sabres.com he spoke to the coaching staff and decided to take some time away from hockey.

After the Sabres beat the Flyers 6-1 – Carter Hutton started in his place – captain Jack Eichel presented Ullmark with the game puck.

“You don’t see it coming,” Ullmark said. “It was a very nice gesture. Everybody reached out to me and have been giving me their condolences, Ullmark said. “When they gave me the puck, it took all my might and my power to not break down completely in the locker room.

“We’re always speaking that we have two families. We have a family at home and we have our family in the team. That certainly was one of the confirmers about how I feel and hopefully how they feel about the team.”

Ullmark is practicing today and plans to travel with the Sabres to Washington, where they’re schedule to begin a two-game series against the Capitals on Friday.

Update: Hutton, who left Tuesday’s 3-0 loss in Philadelphia after taking a hit to the head, isn’t practicing today.

The Sabres recalled goalie Dustin Tokarski to the taxi squad this afternoon and sent forward Rasmus Asplund back to the practice group.

Meanwhile, winger Kyle Okposo, who has missed the first four games with a lower-body injury, is practicing today inside KeyBank Center.

Update: Sabres coach Ralph Krueger said Hutton is day to day. Okposo, meanwhile, would like to play Sunday if he can’t play Friday.

“(Hutton) won’t be on this trip,” Krueger said. “We’ll assess him when we get back. It’s important he gets some rest.”