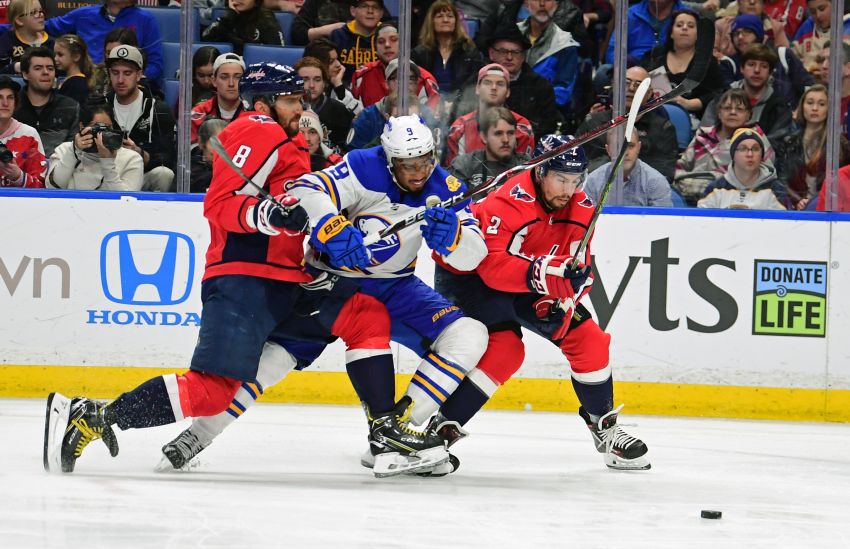 BUFFALO – With 26 seconds left in Monday afternoon’s 3-2 loss to the Washington Capitals and the Sabres readying for one last rush with goalie Chad Johnson pulled, Rasmus Ristolainen tried leaving a drop pass for Evan Rodrigues.

With the Sabres’ third straight loss cemented, Ristolainen lost his cool, swinging his stick into the corner boards – it looked like he was chopping down a tree – and breaking the blade off. The struggling defenseman then skated to the bench, leaving the two pieces on the ice.

“Enough is enough, no one wants to make mistakes like that,” Ristolainen said following the Sabres’ 43rd loss (17-32-11) this season.

Fresh off Saturday afternoon’s wretched 4-2 defeat to the Los Angeles Kings, the Sabres played better Monday, showing a pulse early on. Still, like so many other games, they fell behind before turning it on late and making the contest interesting before the crowd of 18,228 inside KeyBank Center.

This time, it happened after superstar Alex Ovechkin and John Carlson put the Capitals up 2-0 in the second period.

“The second period, for me, is the difference, the missed pucks through the neutral zone, then at times we looked really slow because we didn’t get pucks deep and now you’re playing defense,” Sabres coach Phil Housley said.

In the third period – that’s when the Sabres finally got going Saturday – they jumped all over the Capitals, outshooting them 17-5. Kyle Okposo tipped in Scott Wilson’s shot at 12:42, the winger’s 10th goal.

“We came out, we were ready to play,” Okposo said. “Nothing really eventful in the first, but we didn’t give them much and I thought we checked pretty well. Second period, I thought we got away from our game and it cost us. In the third, we came out desperate.”

“A team’s down, they come out with a push, and I thought our push was really good,” Okposo said. “Some teams are able to have that push all the time, that’s how they play. We’re just not there yet. We’ve got to figure out a way to be able to come with that push.”

Sabres winger Evander Kane said of the final period: “We were forechecking, we weren’t worried about playing defense. I think a good defense is a great offense and a good forecheck because you spent a lot more time in the other team’s zone. We did that most of the third.”

Kane, who will almost certainly be traded before next Monday’s deadline, looked better than he has in recent weeks, scoring his 19th goal with 3.3 seconds left and pumping nine shots on goal, his highest total since opening night.

Following a torrid start, Kane, 26, has been mired in a scoring slump for months, mustering only five goals in 29 games since Dec. 12. He recently endured a 14-game goal drought.

In many of those outings, Kane, who will be an unrestricted free agent following the season, looked invisible.

On Monday, though, he performed much better, showcasing some physicality in addition to some rare offense.

“It was just, woke up a little grumpy on a Monday morning and a little (ticked) off,” Kane said.

“He was more physical, played with a little attitude today, he had some good looks, that goal at the end when it’s over,” said Housley, whose team is 0-6-1 in afternoon games. “But still, he’s in the right spot at the right time. I liked the way he played today.”

As a whole, especially coming off Saturday’s game, Housley liked his team’s effort.

“The result, we definitely don’t like, we want to win at home here,” he said. “But against a really good hockey team, I can’t fault our guys for the effort.”

One thought on “Sabres fall to Capitals after late surge”