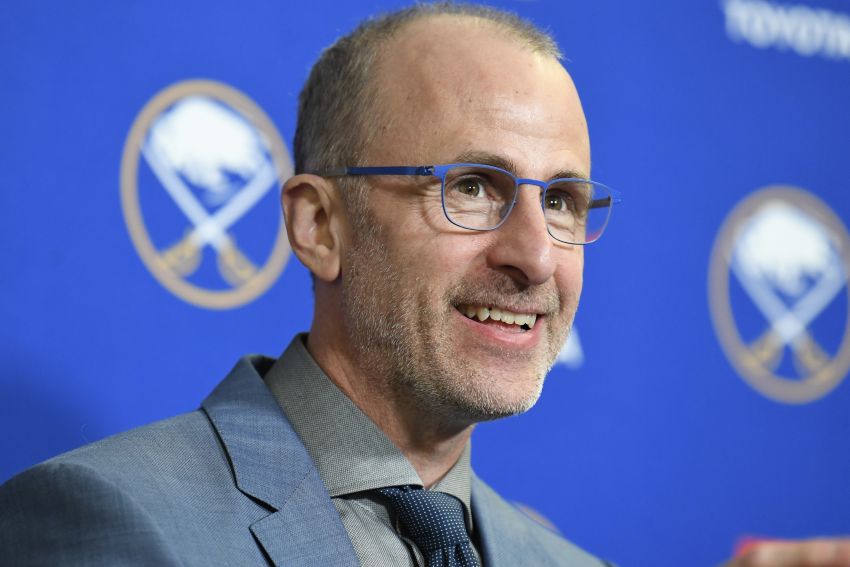 BUFFALO – When Bills coach Sean McDermott arrived at the rink prior to Thursday’s game, coach Don Granato asked him if he would talk to the Sabres before they went on the ice.

Granato said at first, McDermott wasn’t sure if he wanted to address them.

“But after he went around and met the guys and saw what we do for a couple hours, he’s a natural, obviously,” Granato said following Friday’s practice at KeyBank Center.

In the dressing room prior to a 6-2 loss to the St. Louis Blues, McDermott told the Sabres he sees what they’re building and they remind him of his 2017 team, which ended the Bills’ 17-year playoff drought.

“We totally changed the culture, and that’s what’s going on here,” McDermott said in a video the Sabres posted on Twitter.

McDermott, who has led the Bills to the playoffs four times in five seasons, also told the Sabres to “love one another by the way you play.”

“He deals with teams and a competitive environment every single day,” Granato said. “I thought it was awesome to have him and then have him speak after walking around for a couple hours and getting a real good feel for some of our personalities and personnel and how we operate. I thought our players were very, very inspired by the real short talk by him.

“But he has such a great presence to him. Obviously, he’s been in the trenches of sport at the highest level and it’s pretty neat to have him around.”

Granato said they discussed different nuances of the game and how hockey players prepare and react.

“I was obviously picking his brain a lot and asking him a lot of questions on how they do things and the details,” Granato said.

Granato said a coach’s life is so demanding and consuming it can be hard to think about other things. So he appreciates the frequent text messages McDermott sends him.

“It was from the first moment I took the job through the offseason through trade deadlines, through whatever, he sends a text,” Granato said. “It’s pretty special, knowing how intense his schedule is and knowing he’s in the middle of a season, to get a text from him.

“We watch them as professional athletes and a professional team and we see kind of the precedent (the Bills have) set, the standard they’ve set. That’s been very motivating for our group and myself personally. To be able to have that relationship with him is definitely exciting, beneficial for me. I feel that it’s helped us and helped me do what I do. So it’s really neat.”

Granato said defenseman Mattias Samuelsson is “progressing” from a lower-body injury and he expects him to play tonight at home against the Flyers or Sunday afternoon in Philadelphia.

Granato, who on Thursday was named an assistant for Team USA’s entry at the upcoming World Championship, said he has had a long relationship with head coach David Quinn.

“We always looked forward to at some point being on a staff together,” Granato said. “We talked about it in a previous time and it worked out this time around.”

The message was clear: respect the process. 👏#LetsGoBuffalo pic.twitter.com/4BFG9BgB6t