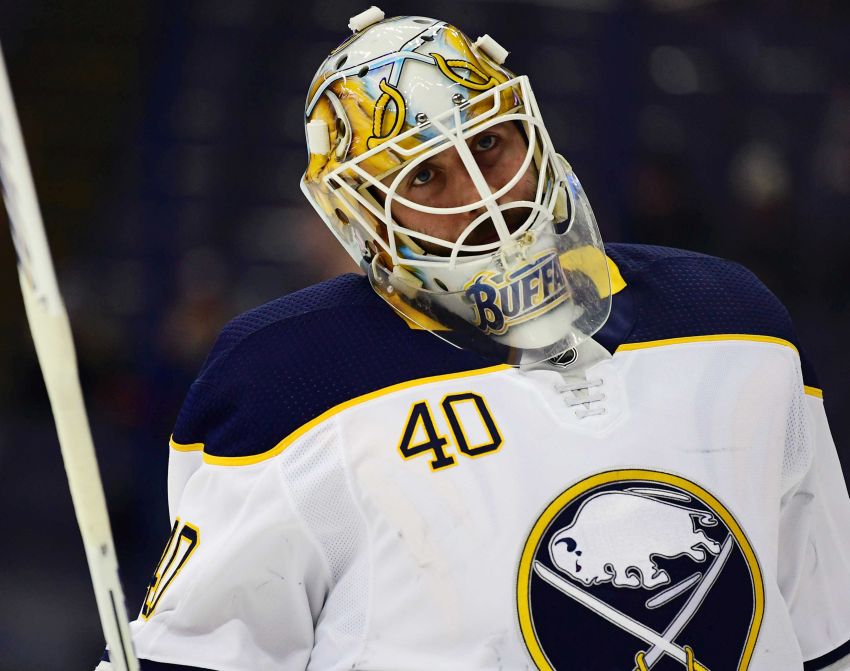 BUFFALO – After receiving the weekend off, Sabres goalie Carter Hutton could start tonight’s game against superstar Connor McDavid and the Edmonton Oilers, his fifth nod in the last seven games and 40th appearance overall.

Following a rough six-week stretch in which he often took a backseat to Linus Ullmark, Hutton, 33, has started looking like his old self at times.

Hutton channeled his early-season form in two recent outings, stopping 70 of 73 shots and helping the Sabres earn three out of four points against the Tampa Bay Lightning and Washington Capitals.

Still, Hutton has only won two of his last 10 games, a run in which he has compiled a 3.76 goals-against average and an .886 save percentage. Thanks to a porous defense – the Sabres have allowed an NHL-high 85 goals in the last 22 games – neither goalie has enjoyed much consistency throughout the team’s awful second half.

In last Monday’s 5-3 loss in Toronto, the Sabres imploded in front of Hutton, hanging him out to dry. Sabres coach Phil Housley mercifully yanked Hutton after the Maple Leafs scored three times in barely two minutes during a wretched second period.

But the Swede couldn’t bail the Sabres out again in Saturday’s 5-2 defeat in Toronto.

To wit: In the second period, Trevor Moore stymied Sabres defenseman Rasmus Ristolainen’s feeble attempt to rim the puck around the boards behind the net. Moore quickly grabbed it and fed Nic Petan in front for the winning goal.

The Sabres’ inability to execute a simple play burned them.

Housley has been riding the hot hand in net for weeks. Last week, Hutton and Ullmark both earned starts on back-to-back days.

Neither goalie had done that all season.

Hutton started the Sabres’ ugly 7-2 loss Jan. 14 in Edmonton, stopping only seven of the 12 shots he faced before getting pulled.

Hutton’s next appearance will tie the career high he set with the Nashville Predators in 2013-14.

The NHL All-Star has been stuck on 36 goals since scoring twice Feb. 15.

Still, Skinner has been generating plenty of chances. On Saturday, he pumped seven shots on goal. A night earlier, he had six shots.

If Penguins defenseman Marcus Pettersson hadn’t put his hand on the puck in the crease Friday, Skinner probably would’ve scored.

“He’s getting his looks,” Housley said.

Skinner, 26, has recorded 30 shots since over his slump. He is on pace for 46 goals in his first campaign with the Sabres.

Two days after New York Islanders fans booed Leafs star John Tavares mercilessly throughout his return to Long Island, the crowd inside Scotiabank Arena in Toronto cheered him wildly when he was introduced in Saturday’s starting lineup.

“That was a pretty special moment certainly to be recognized like that and to get the support from the city and the fans,” Tavares said. “Shows you why it’s special to be a Maple Leaf. Definitely got some goosebumps. It was a nice little boost there.”

Notes: Sabres winger Jason Pominville scored his 15th goal Saturday, the 11th time in 14 seasons he has hit the mark. … Sabres center Evan Rodrigues’ second-period fight with Kasperi Kapanen on Saturday was the first of his NHL career, according to hockeyfights.com. “Before I could get mine off, he was throwing,” Rodrigues said of his gloves. … McDavid has compiled 33 goals and 90 points in 61 games this season. … Former Sabres defenseman Andrej Sekera recently returned to the Oilers lineup after tearing his Achilles during the summer. … The Sabres had Sunday off.