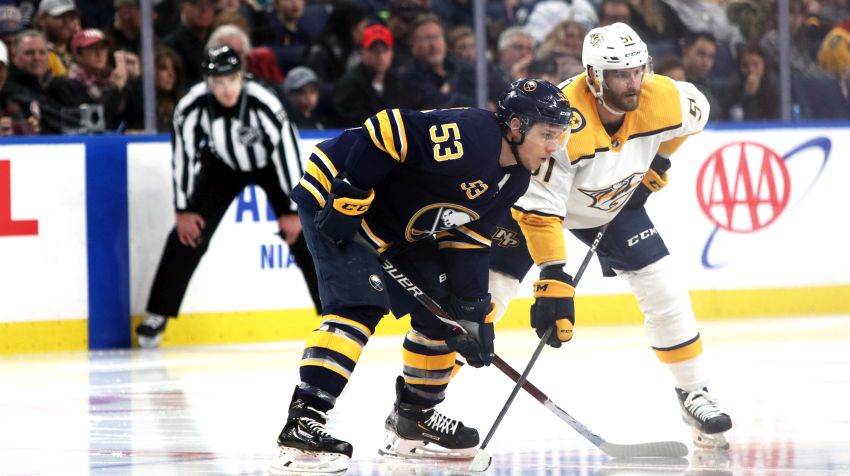 BUFFALO – A seething Phil Housley said it over and over – four times in three minutes, to be exact – following Tuesday’s 3-2 loss, the Sabres’ eight straight setback.

“It’s frustrating because we got screwed,” the Sabres coach said.

To Housley, the Sabres “got screwed” against the Nashville Predators because 2:40 into the second period, winger Conor Sheary scored on a delayed penalty, appearing to tie the game at 2.

The Predators never gained possession of the puck before the goal. Why wouldn’t it count, right?

An official immediately waived it off.

Housley said the call was “sort of mind-boggling to me.”

“The ref’s sitting right in the corner,” Housley said. “It’s unfortunate because of what we’ve been through. Guys played hard tonight and they get screwed.”

In the first period, Nashville’s Craig Smith tipped P.K. Subban’s shot by goalie Carter Hutton in close with what looked like a high stick.

Right away, Hutton motioned Smith, who jumped as he deflected the puck, high-sticked it in.

“I had a clean look at his shot,” Hutton said. “I didn’t know if it hit his glove or his stick. Either way, it was pretty high. It was kind of coming at my head.”

But replay officials in Toronto ruled there wasn’t conclusive evidence Smith deflected the puck with a high stick.

Housley can live with that assessment, although he doesn’t agree with it.

“I know you can’t argue the high stick on Smith’s goal, that’s coming from Toronto,” Housley said. “Our angles see him jump up and shows it hits his stick.”

Housley’s upset because the no-goal call help nullify a strong effort by his reeling team. Fresh off an ugly weekend – they lost twice, getting outscored 9-1 – the Sabres responded well against one of the NHL’s heavyweights.

The Sabres have completely imploded over the last six weeks, losing 21 out of the last 24 games (3-18-3). Right now, they’re on a season-long losing streak.

Housley might need wins to save his job. Only two games are left this season.

“But we have to garner that and bring that same effort, because if we play like that, we’re going to win. It’s just unfortunate that we do play like that and we get screwed.”

Sabres winger Kyle Okposo, who scored in the first period, said of the breaks: “When it’s not going well, it’s just not going well. But I liked the way that we responded. I think that in the previous games, if we had a goal go against us, I thought we just let down and we stopped working, stopped competing.

“Tonight, I thought we stuck with the game and we made a couple good pushes.”

The Sabres made one late in the second period, when winger Jeff Skinner’s career-high 38th goal, his first in nine games, tied it at 19:55.

Still, Ryan Johansen scored the winner in the third period before the announced crowd of 16,569 inside KeyBank Center.

Skinner showcased remarkable consistency for five months, scoring at a 50-goal pace well into February. But after a two-goal outing Feb. 15, he started a marathon slump.

Tuesday’s goal was just his second in the last 23 contests.

“He’s had his opportunities, but you can see how important his goal scoring is to our team,” Housley said. “We’re right there until the end.”

Skinner said: “You score to win games, so it’s frustrating we didn’t get a win. But yeah, personally, obviously it’s been a while for me.”

Skinner, an offseason acquisition from the Carolina Hurricanes, tied Gilbert Perreault (1970-71) and Ray Sheppard (1987-88) for the third-most goals ever by a first-year Sabre. Perreault and Sheppard were both rookies.

Skinner, 27, has played the most regular-season games (659) of any active player who has never appeared in the postseason.

The nine-year veteran has missed the playoffs every season. Meanwhile, if the Hurricanes, who hold a playoff spot, clinch their first berth since 2009, the Sabres would own the NHL’s longest drought at eight years.

One thought on “Sabres coach Phil Housley miffed after no-goal call: ‘We got screwed’”