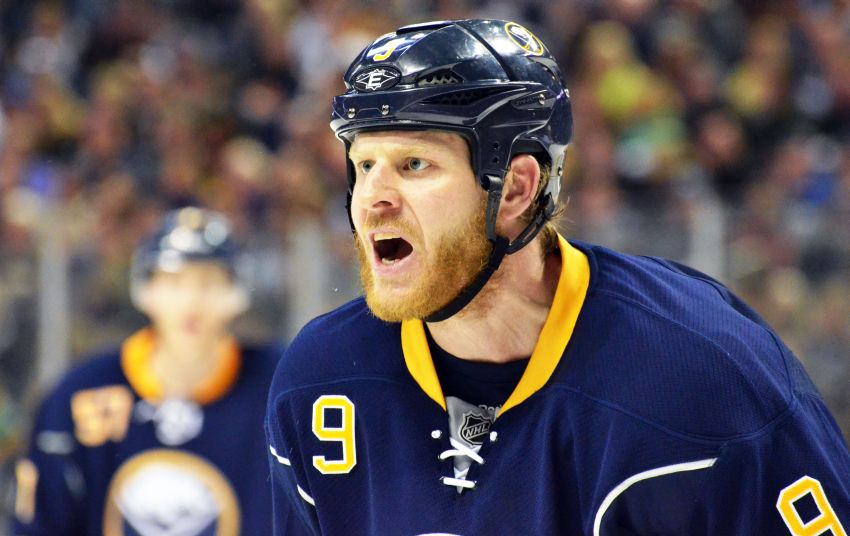 Steve Ott was named a co-captain earlier this month and was given the ‘C’ on Monday. ©2013, Dan Hickling, Olean Times Herald

“I want to play a fine line edge of the game,” Ott said Wednesday after the Sabres prepared for tonight’s road tilt against the New York Rangers. “But I also can’t be a deterrent to my teammates, no difference if I was a captain or was not a captain.”

In Monday’s 4-3 loss to Dallas, his first game as the Sabres’ lone captain, Ott slashed Sergei Gonchar, then earned an unsportsmanlike conduction penalty. The Stars scored on the ensuing power play.

“I wasn’t happy with getting an extra penalty and stuff,” said Ott, who noted the infraction cost his team. “But you know what? That’s going to happen.”

“He’s got to play his game, but obviously within the realm of the lines and discipline and things like that,” Rolston said inside the First Niagara Center. “Don’t want to take his game away from him, though.”

That game’s fierce and, at times, even a bit odd. Ott blew a kiss to Dion Phaneuf and tried to lick Jeff Halpern’s helmet last season.

“I think riding on the edge and keeping guys honest on a nightly basis, it’s no different than Patty Kaleta or some other guys, even offensively,” Ott said. “You have to respect their talent and what they do throughout the game.”

Sabres winger Drew Stafford added: “He’s a high-energy type of player. He speaks his mind a lot. He’s very loud. So he brings a lot to the table.”

Zemgus Girgensons called Ott a “hardworking player,” something “a captain should be.”

“He’s leading us on and off the ice,” the rookie winger said. “So he’s a great example for every single guy in the room.”

Rolston named Ott and Thomas Vanek co-captains of the rebuilding club earlier this month, with Ott serving on the road and Vanek at home. The coach gave Ott the captaincy after the hapless Sabres traded Vanek to the New York Islanders on Sunday.

Did Rolston think about naming another co-captain with Ott?

“No, not right now,” he said. “We’re just going to see how things play out and go from there.”

Ott had never worn the ‘C’ in junior or professional hockey prior to this year, although he was an assistant captain for six NHL seasons, he said, five of them in Dallas.

“I don’t think I’m learning very much,” Ott said about his new duty. “I think it’s already instilled in you for a long time.”

The 31-year-old Ott, one of only five Sabres over 30, said he doesn’t feel any extra pressure, calling it “a tremendous honor to wear it on your jersey for the boys.”

“A lot of guys speak up here. The room’s an open concept in here with all these young guys, whereas some teams I’m sure young guys don’t speak. We need all the boys.”

Ott said “time will tell” what kind of captain he becomes.

“I want to play a hard style that guys, accountability-wise, know that if you’re going, they better be going as well,” he said.

Ott has finally gotten going offensively, scoring twice in the last three games, his first goals this season. Having scored 98 times in 628 NHL contests, Ott wasn’t worried about his offense.

He added: “(Goals have) come my whole life. It’s not going to stop 30 years into hockey.”