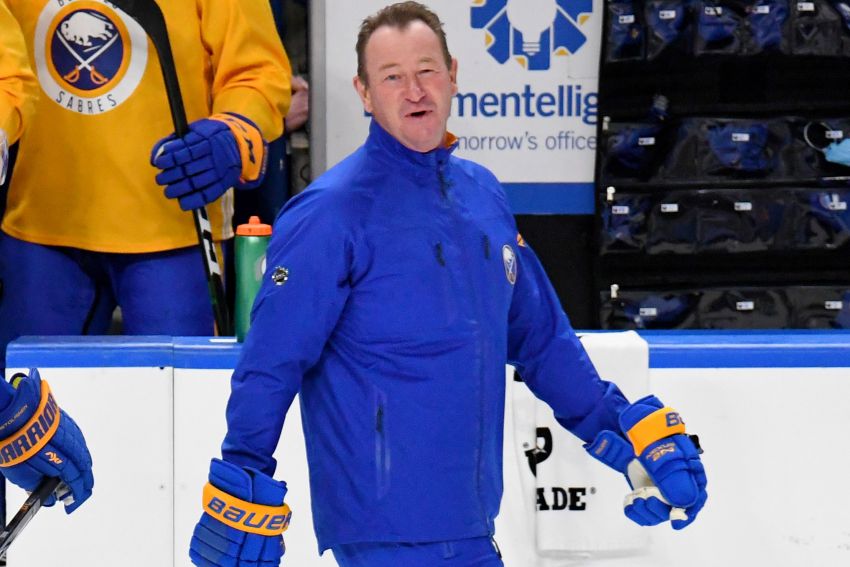 BUFFALO – When Steve Smith wakes up every morning, the Sabres’ top assistant coach immediately grabs his phone to check the results of the COVID-19 test he took the previous day.

The few seconds it takes Smith, 57, to spot the green button that signifies a negative test are agonizing.

“When I’m green, I’m a happy guy,” Smith said on a Zoom call following Thursday’s practice. “But I’ve got to tell you, every morning I have a pit in my stomach wondering whether or not it’s going to be my day. There’s no doubt that there’s fear in everyone.”

That fear, however, dissipates once Smith arrives at KeyBank Center. The Sabres, despite having nine players and coach Ralph Krueger in the NHL’s COVID-19 protocol, believe they’ve followed the league’s rigid guidelines while implementing their own.

“I feel like this is the safest place in the world,” Smith said. “We want to make the players feel that way as well. I think the players come to the rink, they know they have a band of brothers around them, whether it’s the coaching staff, the trainers and/or the players, we’re all together in this.

“I certainly feel safe and I think that they feel safe coming here as well.”

Smith will almost certainly be running the bench if the Sabres can play Monday’s scheduled game against the New York Islanders. He, of course, knew he might have to fill in at some point this season.

“We did talk about it a little early on and we certainly knew that there was a possibility of anything happening at this point in time,” said Smith, who won three Stanley Cups during his 804-game NHL career as a defensemen.

Right now, the Sabres have 18 healthy players: 10 forwards, five defensemen and three goalies. Following a day off Friday, Smith said the Sabres will add reinforcements for Saturday’s practice, likely to the taxi squad.

With nine players missing – Smith couldn’t offer any updates on them – the Sabres spent the last three days mostly raising their conditioning levels and working on their skills. Smith said the Sabres will do more team-oriented work this weekend.

“We were trying to get some pace going from the first couple days,” Smith said. “I felt like the first day the guys were a little in awe of what was happening and how we were going to approach this. But the last few days I felt we were really good. There was a lot of good substance to the practice and guys had good energy.”

They’re going to need plenty of energy against the Islanders, who have played three games since their two postponements versus the Sabres earlier this month.

“We’re going to meet a moving train on Monday night when we see the Islanders,” Smith said.

As the Sabres went into quarantine last week, the coaching staff tried to keep the players engaged by making individual calls and doing one-on-one video work before expanding into team Xs and Os.

The Sabres also had stationary bikes and synthetic ice dropped off to the players.

Staal, 36, said he put the synthetic ice on the second floor of his apartment.

“I was probably a little loud at times, but no one knocked on my door saying, ‘Could you keep it down?’ he said. “It was good to keep that sharpness.”

Staal, whose wife and three sons stayed home in Minnesota this season, would stickhandle on the synthetic ice and FaceTime with his children.

“I (would) come up with a drill and then they would come up with it and do it themselves at our house back in Minnesota,” he said. “So actually it made me use the ice quite a bit. It was pretty fun to do that. …

“We’re fortunate to have these days of practice now. I actually feel pretty good. I didn’t feel very good the first day but after these last two (the) energy’s up.”