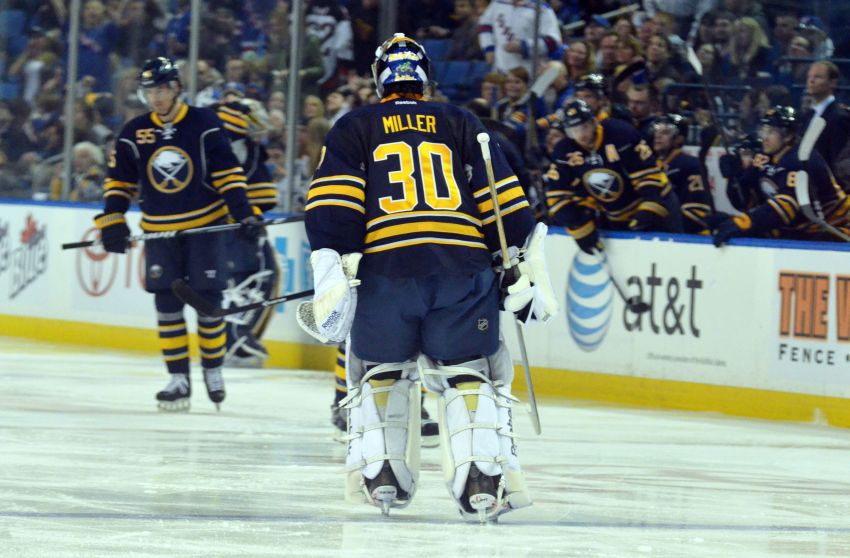 Ryan Miller skates off the ice Friday, perhaps for the final time with the Sabres, as teammate Thomas Vanek (26) bangs his stick on the boards. ©2013, Dan Hickling, Olean Times Herald

BUFFALO – Seriously, in the wake of Friday’s debacle, can the Sabres ever play Ryan Miller before the home crowd again? How ugly could it become inside the First Niagara Center?

With only three games left this season, the goalie’s 10-year career here looks finished. The Sabres’ embarrassing 8-4 loss to the New York Rangers sure felt like Miller’s 498th and final appearance.

After two goals deflected in off teammates late in the first period, the crowd serenaded two Bronx cheers on Miller. In between, he sarcastically saluted the crowd by waving his arm, a scene reminiscent of Patrick Roy’s disastrous exit from Montreal in 1995.

It was all tough to watch before Miller, to the crowd’s delight, was yanked 1:49 into the second period.

The first barb appeared to fluster Miller. A second later, he nearly whiffed on the puck trying to clear it, creating an easy goal for Ryan Clowe with four seconds left in the period.

“They can mock me for that horrible play,” Miller said after allowing four goals on 14 shots. “They made sure to do it after the second period. Yeah, it’s fine. It’s one of the worst plays I’ve made since I’ve been here. (Lousy) timing.”

Miller should’ve stopped there. But he went further when he was questioned about the fans again.

“If they can dish it out, they can take it back,” Miller said. “I sat there and took it. I screwed up. I made a critical error.”

That quote has incensed some fans. So did his reply to the Roy comparison.

“Well, I would love to have what happened after that,” Miller said about Roy, who was dealt to Colorado within days of demanding a trade. “Just saying. Doesn’t mean I want to leave. … The guy won two Stanley Cups after that.”

If you read Twitter, message boards or talk to fans, the majority of the team’s supporters don’t want Miller to play another game for the Sabres.

They’re tired of the losses and Miller’s angry postgame media sessions. While they’ve been happening for years, there’s a higher frequency this season. They have more bite to them. It’s easy to forget how friendly and thoughtful Miller can be.

Clearly, mediocrity – the Sabres have missed the playoffs two straight seasons and four of the last six – has worn Miller out. You can see it in his face and his body language as he walks around the dressing room.

Miller looks beaten down by losing.

The 32-year-old, like many others, has few answers for the Sabres’ struggles.

“We haven’t done it,” Miller said. “We haven’t lived up to any kind of expectation. It’s just been years and years of not getting it done. So if they want change, if they’re (ticked) off, that’s fine. It’s not like we haven’t been searching for a way to satisfy our needs that basically satisfy their needs. We just haven’t got a job done.

“You don’t win over Buffalo fans by losing hockey games and putting up mediocre seasons. The last three years have pretty much been that.”

In early January, shortly after the NHL lockout ended, Miller arrived back in Buffalo full of energy and hope. Prior to his first interview, he went around to each media member, shook his hand and asked how he spent the work stoppage.

That seems like three years ago, not three months.

Miller’s days in Buffalo are probably numbered. The Sabres are a broken mess. Don’t let the recent five-day resurgence fool you. In their current state, they’ll probably never win. They need an overhaul.

It’s easy to forget, but Miller has performed well most of the season. His numbers or the Sabres’ record doesn’t reflect some consistently strong play because the rest of the team is so bad.

Miller, who has a year left on his contract, still has trade value. The Sabres have several goalies in their system.

Despite a terrible relief outing Friday, 24-year-old backup Jhonas Enroth has re-established himself as an NHL goaltender recently.

Matt Hackett, a 23-year-old prospect acquired from Minnesota, has big league experience. Most observers believe he should crack the NHL regularly someday.

Right now, Hackett’s the No. 2 behind Rochester’s David Leggio, one of the AHL’s best netminders. Those who have watched the Williamsville native closely believe he deserved league MVP consideration.

It would be an excellent public relations move. The 28-year-old’s presence would surely create a positive atmosphere, something you can’t say about Miller.

The Sabres had Saturday off after their game in Pittsburgh was moved to Tuesday so the Penguins could play in Boston.