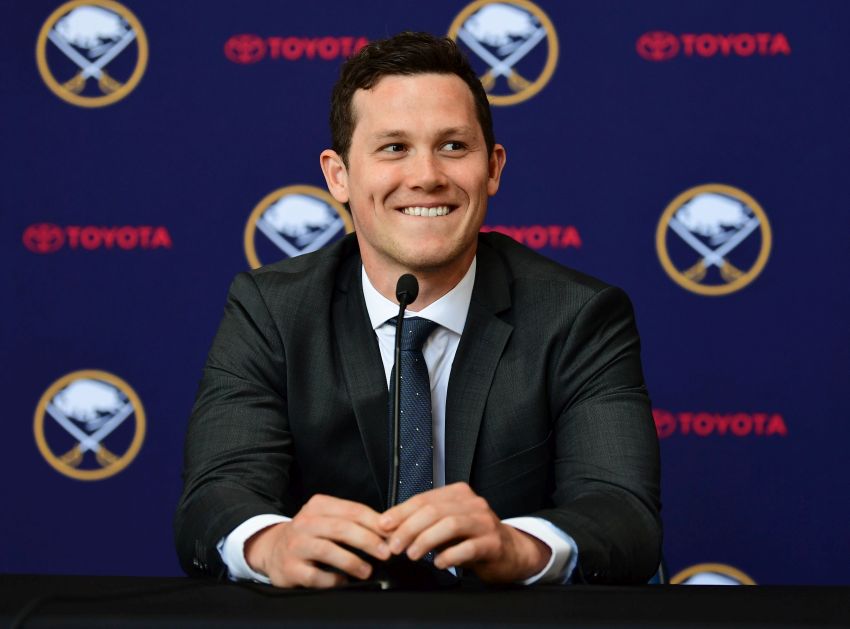 BUFFALO – For eight seasons, Sabres winger Jeff Skinner only knew one organization. He grew up with the Carolina Hurricanes, joining them as a teenager and quickly becoming the face of the franchise. He felt a certain comfort there.

So his transition here could’ve been tough. Everything was new. Even the best players often need time to acclimate.

“It was a lot of change and there was a lot of adjustments, I think,” Skinner said Tuesday during a news conference to discuss the eight-year, $72 million contract he signed Friday. “(They were) sort of little things you don’t really think about, and I think they kind of add up. For me, the adjustment here went smoothly. Everything went positive.”

Skinner, who was beginning the final season of his contract, started piling up goals in October. As the Sabres rattled off 10 straight wins in November, it looked like he could enjoy one of the greatest campaigns in franchise history.

“It was just sort of positive step after positive step,” Skinner, who was acquired Aug. 2, said of transitioning to his new team.

As Skinner’s first season with the Sabres progressed and they plummeted down the standings, questions about his uncertain future became more frequent. The Toronto native usually responded by saying he lets his agent handle contract talks.

Following the season, Skinner started weighing what was important to him.

Despite the Sabres’ sorry finish, Skinner believes they possess a strong nucleus of talent.

Remember, the Sabres haven’t made the playoffs since 2011, the NHL’s longest drought. Skinner, meanwhile, has played 661 games without appearing in a postseason contest, more than any active player.

Skinner also feels comfortable with his teammates and in Buffalo, which is close to his family in Ontario.

“The top things on my list were sort of all the positive things about Buffalo,” Skinner said in the KeyBank Center atrium. “Right at the top, I want to win. I wanted to play on a competitive team. I think with the players we have that’s a realistic thing to think.

“You sort of go down the list on sort of living situations, how your family is going to be affected. All those things line up positively.

He ended up bypassing unrestricted free agency for a contract with an average annual value of $9 million. Only Sabres captain Jack Eichel, Skinner’s center most of the season, has a higher salary cap hit ($10 million) on the team.

“I just didn’t feel … like it needed to get to that point where I wanted to look elsewhere,” Skinner said.

Skinner, of course, also had to feel comfortable with Ralph Krueger, the Sabres’ new coach. After the Sabres hired him as Phil Housley’s replacement May 15, Skinner said people with connections to Krueger contacted him.

“Every text or call I got was extremely positive,” Skinner said. “That was a really good sign.”

Skinner said Krueger, who made his name on the international hockey scene coaching Switzerland, is “incredibly intelligent.”

“He’s got a lot of experience in numerous situations that I think are going to benefit him,” he said. “But for me, I think the thing that sticks out is his excitement, just his genuine excitement to be in Buffalo and get things rolling.

“As a player, I think that’s the kind of thing that excites you.”

“You expect to keep getting better,” he said.

Not counting the lockout-shortened 2012-13 season, Skinner has averaged 33 goals in his seven full NHL seasons. Still, he has never scored 30 goals in consecutive years.

Following his three previous seasons of 30 or more goals, his production fell off sharply – 11, 15 and 13 goals, respectively – the next season.

Skinner believes the competitive training environment he experiences in Toronto will help him improve.

“There are a lot of hockey players who spend the summer there, so as a result there’s a lot of skill development coaches, there’s a lot of power skating coaches, strength coaches that are in the area and pretty expert in their fields,” he said. “I think you just surround yourself with people who are smart and passionate and hungry for getting better.”