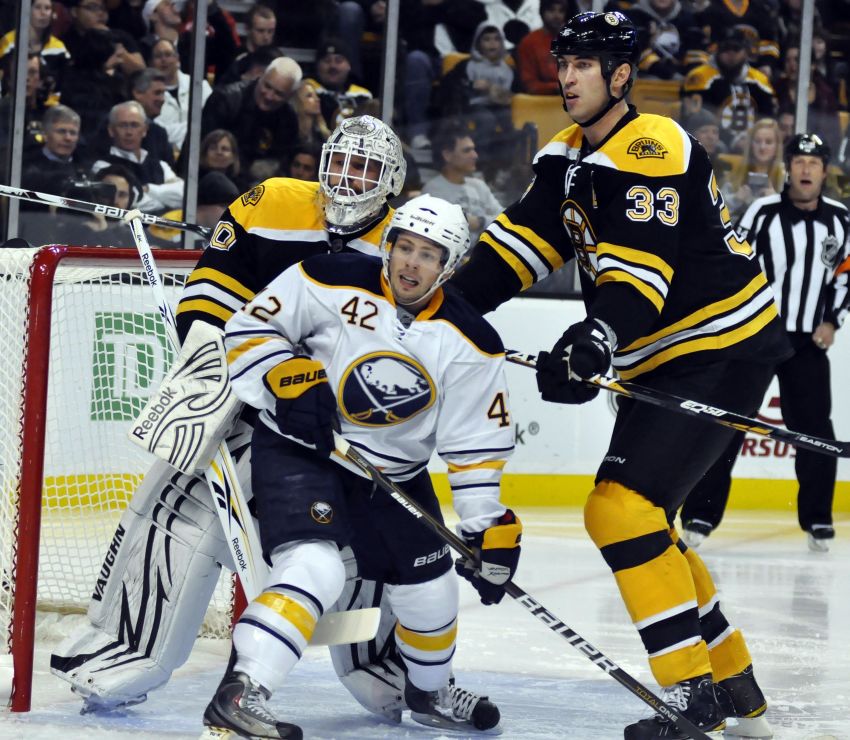 Because of his size, Nathan Gerbe (42) must battle players like Zdeno Chara, who are more than a foot taller than him. ©2013, Dan Hickling, Olean Times Herald

The team placed the diminutive winger on waivers today for the purpose of buying him out if he doesn’t clear, his agent, Jordan Neumann, told the Times Herald.

When asked if Gerbe had any warning, Neumann replied, “Absolutely none.” The Sabres still hadn’t contacted Neumann as of early this afternoon. Sabres general manager Darcy Regier said Tuesday he had no plans for buyouts.

Gerbe was scheduled to make $1.85 million next season. His $1.45 million cap hit will be wiped away. The Sabres owe Gerbe $308,333 each of the next two seasons, according to capgeek.com.

Neumann’s confident Gerbe will land on his feet.

“I think he’s a player with elite skill,” he said.

Gerbe, a prolific NCAA and AHL scorer, has never showcased that slick offensive ability in the NHL, though, only accumulating 29 goals and 72 points in 188 games.

The diminutive American – Gerbe’s only 5-foot-5 and 173 pounds – has instead mostly become a third- or fourth-line checker. The 25-year-old had only five goals and 10 points in 42 games last year.

One thought on “Sabres waive Nathan Gerbe for buyout”