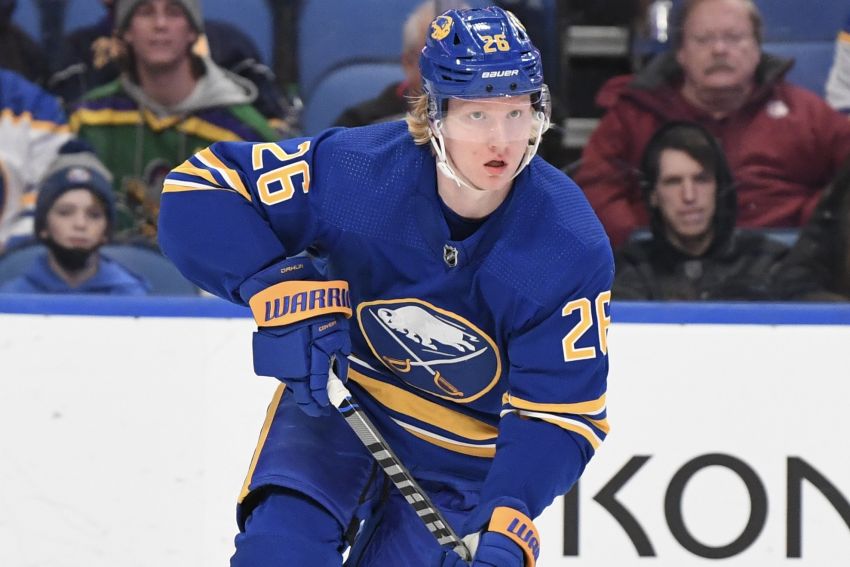 At one end of the ice Tuesday, defenseman Rasmus Dahlin performed dynamically, scoring twice in the Buffalo Sabres’ 4-2 win against the Winnipeg Jets. At the other end, rookie goalie Ukko-Pekka Luukkonen looked calm and composed, turning aside shot after shot in his fourth consecutive start.

At times during the past few weeks, as the losses piled up and the Sabres plummeted down the standings again, it could be hard to find positives in the rebuilding team.

But in ending their seven-game winless skid and earning their first victory since Nov. 26, the Sabres offered a glimpse into what could be a very bright future. They possess a lot of young talent, and right now, some of it is starting to mature.

Dahlin, 21, enjoyed his first two-goal NHL outing, ending a 10-game goal drought. The Swede, who has struggled at times this season, nearly scored on a wrapround 20 seconds into the contest. That turned out to be a harbinger.

“To come out for the third with a lead, it’s huge,” Dahlin said.

Dahlin wrist shot on the power-play 7:14 into the game opened the scoring. In between, he fell down, helping the Jets’ Nikolaj Ehlers tie the game 12:36 into the second period.

“He had a hiccup there and lost an edge turning up and it cost us a goal in the second period,” Granato said. “But that’s what happens. I mean, he’s a great player and he’s going to make more plays than he’s going to give the other team. And that’s going to be a progressive thing.”

Meanwhile, Luukkonen, 22, stopped 34 shots, earning his first win this season and the second of his eight-game NHL career.

The Finn played splendidly in three starts last week, but the Sabres offered him little offensive support, scoring just three goals. On Tuesday, however, the Sabres grabbed leads and clamped down in front of him late.

“We played really solid, we kept them outside,” Luukkonen said. “I think we were boxing out guys really well in front of the goalie. I saw pretty much all the shots today. Of course, as a goalie, you appreciate that and you appreciate a good defensive game.”

He added: “I’ve been feeling good, feeling confident and make good strides in the game.”

Luukkonen made his best stop late in the first period, moving across his crease to stop Mark Schiefle’s one-timer with his right pad.

“Talent is potential,” Granato said of Luukkonen. “And he’s acquiring so much more skill and confidence and wisdom and hindsight, those sort of things that you go along and have the opportunity to gain experience at any level. Him coming to training camp, going back to Rochester, struggling for a time, he’s internalized all that and his composure tonight again was what I was impressed with.

“And he was aggressive. He actually got in some physical confrontations with guys in his crease that I loved, fought for his space. That’s a progression for me, that attitude that, ‘I have ownership of this. I’m not just here for a holiday.’ I like all of that in his game.”

Winger Jeff Skinner sealed the game 11:55 into the third period, scoring his ninth goal – two more than he scored all of last season in 25 fewer games. Winger Anders Bjork scored the Sabres’ other goal.

Sabres defenseman Robert Hagg left the game after the second period and did not return. Granato did not have an update.

Tuesday’s game at Canada Life Centre was the Sabres’ first in Canada since March 3, 2020. That game, coincidentally, was also in Winnipeg.