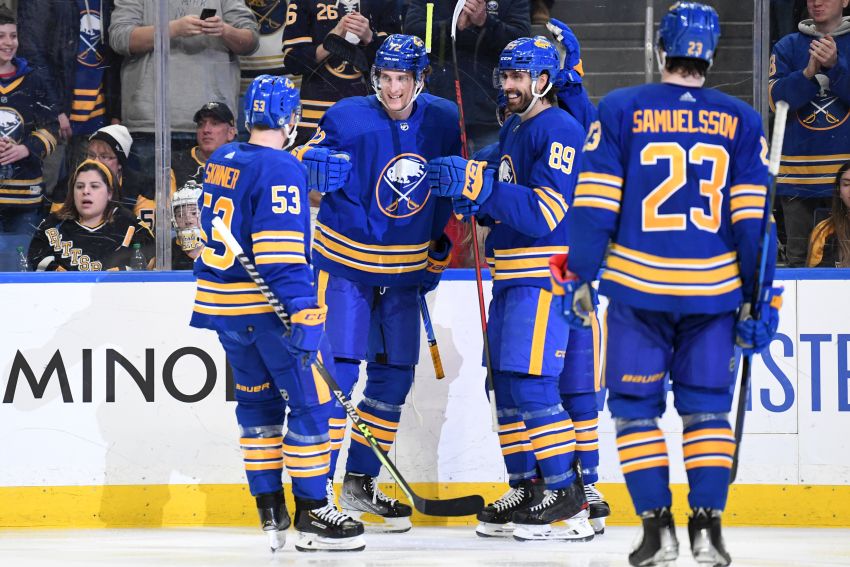 BUFFALO – Each win the Sabres earn these days feels like the kind of game they would’ve lost earlier this season.

Take, for example, Wednesday’s 4-3 shootout victory over the Pittsburgh Penguins, a game in which they blew three leads, including one late in the third period before center Tage Thompson and winger Alex Tuch scored shootout goals.

In the recent past, they probably would’ve wilted down the stretch, especially against the NHL’s best road team.

“That just probably comes with some of the adversity and challenges, I think, we probably faced in the beginning of the year,” Thompson said of the Sabres’ response each time the Penguins tied it. “Earlier in the season, we’d probably be in a similar situation like that and maybe fold and let it spiral out of control.”

Over the last two weeks, the Sabres have started showcasing more maturity and found ways to win tight games late. They’ve elevated their play to a level not seen in these parts in years.

The Sabres have their first three-game winning streak since Oct. 14 to 19, the first three contests this season. All three triumphs have come in overtime or a shootout. They haven’t trailed in any of them.

They’ve won five of their last six games. They’re 7-3-0 this month. In those 10 games, they’ve face nine opponents in a playoff spot.

Coach Don Granato believes the Sabres wouldn’t have won a game like Wednesday’s earlier this season.

“The psyche component didn’t affect us like it would’ve a couple months ago, and we went right back to execution,” Granato said the Sabres’ response when Pittsburgh scored. “Our execution’s been really good.”

“Guys are more understandable of the feel of the game, where we’re at in the game and what type of play you have to make,” he said.

Wednesday was Thompson’s sixth two-goal outing this season, and he’s up to a team-best 27 goals. He scored twice from the right circle, where he has developed into a lethal threat.

After Thompson opened the scoring 17:15 into the game, Sidney Crosby’s power-play goal tied it 26 seconds into the second period.

Thompson scored again 1:01 into the third period. Then Kris Letang’s power-play goal at 15:04 knotted it at 3 before the 9,399 fans at KeyBank Center.

Despite allowing three goals, the Sabres clamped down defensively, often stifling the Penguins at even strength. While earning three of four points in Pittsburgh earlier this season, the Sabres allowed a whopping 96 shots on goal.

But the Sabres’ have morphed into a tighter five-man unit. On Wednesday, they limited the Penguins to 26 shots. Their defense corps played a major role.

“It was our execution,” Granato said. “We played the way we need to play. That area of our game has evolved. I spoke this morning about Mattias Samuelsson, the growth of (Jacob) Bryson, the growth of (Rasmus) Dahlin and (Henri) Jokiharju. I mean, those are four young guys that have really taken the lead in playing aggressive, limiting time and space and they’ve taken a lot of pride in shutting off opponents’ transition, shutting off opponents’ offensive opportunities, and they did it again tonight.”

Thompson said the Sabres, who got blown out 6-1 by the Edmonton Oilers last Thursday, limited the Penguins’ chances by “not giving them too much respect.”

“As soon as you back off and give them time and space they’re gonna make plays,” he said. “I think after that Edmonton game, I think we kind of went into that game a little bit too, maybe, starstruck, gave their good players too much time to make plays. And I think after that we’ve kind of had a focus on, it doesn’t matter what team we’re playing. We’re going to go after them, be aggressive, and hunt down pucks.

“I think tonight we took time and space away from their good players and they weren’t able to create much out there.”

Sabres goalie Craig Anderson made 23 saves and stopped both Penguins in the shootout.