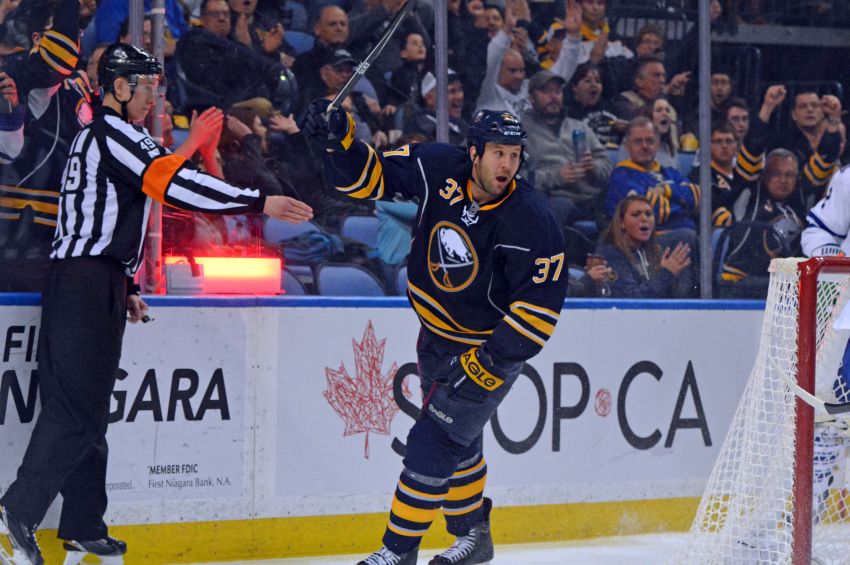 BUFFALO – It was a pretty goal, the type that can bring fans out of their seats before the puck is even in the net. Basically, it was the kind of goal Sabres center Matt Ellis never scores.

In 351 NHL games, Ellis has only 21 goals. The likable veteran hadn’t scored in 33 appearances this season prior to his nifty highlight-reel winner Wednesday in the Sabres’ 4-3 come-from-behind victory against the hapless Toronto Maple Leafs inside the First Niagara Center.

“Putting the puck in the net, there’s no better feeling,” an exited Ellis said after the Sabres rallied from a 3-1 second-period deficit.

The unlikely play developed 3:41 into the third period when Ellis, who hadn’t scored since April 13, grabbed Nikita Zadorov’s pass in the left circle, cut to the net and drew out Jonathan Bernier before backhanding the puck by the Leafs goalie.

“I don’t score many like that,” Ellis said. “Usually they’re gritty, in-the-blue-paint-type goals. That’s definitely one to be excited about.”

Joked Ellis, who had zero points all season entering the night and had his first two-point game since March 31, 2010: “My hands are finally starting to come around at 33.”

Actually, the Sabres might finally be starting to come around 77 games into the season. They won their second straight game, moving them to within two points of the idle Arizona Coyotes for 29th place.

The pro-tank fans can’t be happy. Through all the adversity and turmoil this season, the Sabres haven’t quit. Deep down, some Sabres fans probably appreciate that. Unlike Thursday, when the home fans cheered for the Coyotes in their 4-3 overtime win, the Sabres supporters in the bipartisan capacity crowd of 19,070 rooted for their team again.

“It’s about the integrity of the game,” Nolan said. “You’re not going to tell professional athletes not to work and not to compete. This group here, they’re giving us what they have to give for the last little while here. It feels good when you see a group like this work and get rewarded for a win.”

Ellis added: “Each and every day, no matter what the circumstances, guys are laying it out there. That’s a great sign of character in this locker room.”

That Ellis, perhaps the hardest-working Sabre, capped the comeback was fitting.

“These guys, they work and they compete,” Nolan said. “Matty Ellis, whether you’re playing on a Sunday morning or a June night, he’s still going to play the same thing as he does now. It was great to see him finally get awarded on the offensive side. His important part of the team is the way he approaches the game. He’s a true pro.”

Nolan said Ellis joked he “didn’t dump it in the corner that time.”

“The corner of the net he dumped it in perfect,” Nolan said.

The Sabres, who beat Arizona 4-1 on Monday, have scored four goals in consecutive games for only the third time this season. They’ve outshot an opponent three straight times for the first time.

Why has the NHL’s worst offense caught some fire now?

“Showing clips over and over and over again about how important it is just to throw pucks on the net in this league,” Nolan said. “ … You can’t score if you don’t shoot.”

The Sabres have 105 shots in their last three games.

Zac Dalpe’s first goal with the Sabres opened the scoring 6:48 into the game. Dalpe has points in three straight games after zero in his first 13 appearances.

Eric Brewer tied it at 16:41. James van Riemsdyk put the Leafs up 2-1 47 seconds into the second period.

Then Ellis scored his unlikely goal.

“It’s huge,” Sabres captain Brian Gionta said about Ellis’ goal. “He works extremely hard for this team. He brings those intangibles you need to win. He’s a character guy in the room.”

The Sabres killed two late penalties to seal the game.