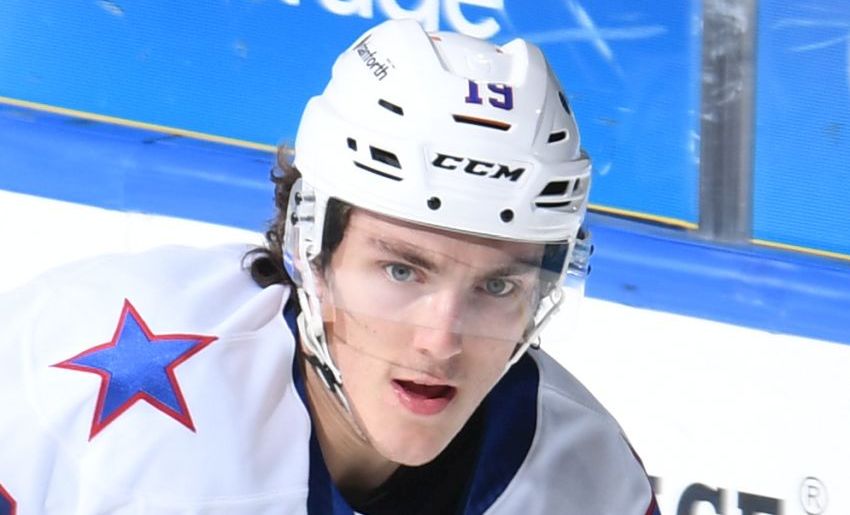 Having previously played with Peyton Krebs, winger Alex Tuch said he knew a pass was coming before the center’s nifty no-look backhand created his first goal with the Sabres.

“I’m not really surprised that he did that,” Tuch said on a Zoom call following Saturday’s afternoon’s 4-3 overtime loss at TD Garden in Boston. “I saw it coming the whole way.”

Tuch, however, might’ve been the only one in the building who thought Krebs was passing the puck.

When Krebs grabbed a cross-ice pass near the top of the right circle, it looked like he had a prime opportunity to unleash the puck on the power play. He skated to dot but instead of shooting, he moved around a diving Bruins defender to the bottom of the circle.

That’s when Krebs adroitly fed Tuch, 25, in the slot, and he one-timed the puck past goalie Linus Ullmark. Krebs finally put his eyes on Tuch after he released the puck.

“I thought he was gonna see me at first and then he held onto it,” said Tuch, whose goal put the Sabres up 3-1 19:11 into the second period. “I’m like, ‘OK, I know what he’s gonna do with it next.’ I’ve seen him do it in practice. That backhand pass is lethal. He’s not even looking, he’s got everyone else looking in the wrong direction and he found me wide open. I thought he had everyone – not only on the ice, but in the stands, the cameras even – looking that way.

“He’s an unbelievably skilled player and he’s got great vision out there. He makes the power play even more lethal every time he’s on the ice. You’re going to see a lot more of that.”

“I just tried to pull it around and Tuchy was there so I just put in a good spot and he did the rest,” said Krebs, whose assist was the first point of his three-game Sabres career.

“That was a special moment for us and I think definitely for him,” said Krebs, who was acquired with Tuch on Nov. 4 in the blockbuster Jack Eichel trade.

The assist was the second of Krebs’ 16-game NHL career. His other point was the primary assist on a Tuch goal May 3 with the Vegas Golden Knights.

Coach Don Granato, who rejoined the Sabres for the game after leaving COVID-19 protocol, said Krebs has evolved through his short stint in Buffalo.

“Poise with the puck and comfort with the puck, so he waited the defender out to open up the next option,” Granato said of the play. “He was comfortable saying, ‘Hey, you’re either going to block my shot or I’m going to take it,’ and he postured the puck that way and made the defender commit and he opened up Tuch beautifully.”

Tuch, who grew up in Baldwinsville rooting for the Sabres, said his first goal in his third game got the “monkey off the back.”

“(It’s) definitely always good each and every year,” Tuch said of his first goal. “But better here in Buffalo, it feels good to get my first as a Sabre.”

“Those usually go to my dad,” Tuch said. “He has a little collection of anything like that. It was special. It felt really good to get my first here. It was a dream come true.”

what a beauty of a pass from Krebs, Tuch PPG 3-1 #LetsGoBuffalo #NHLBruins pic.twitter.com/0qK373EDvz