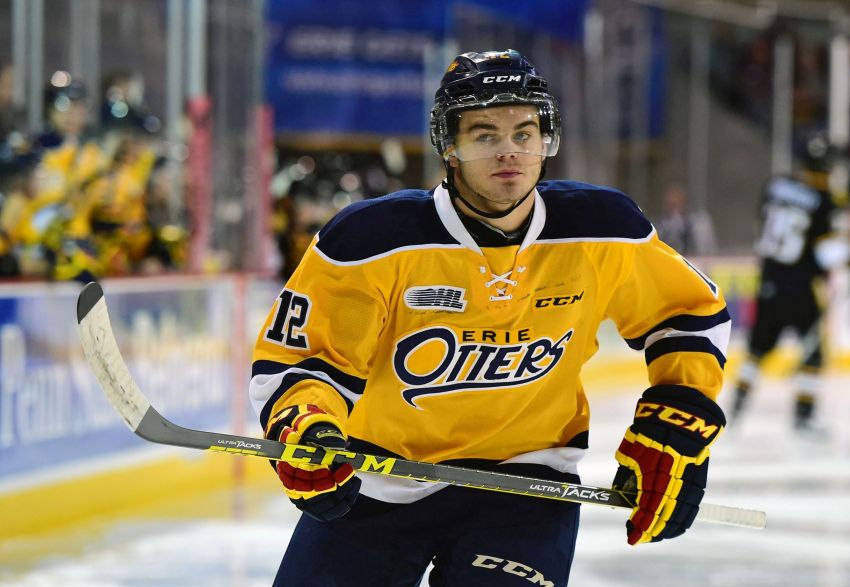 After scoring in the season opener, the 5-foot-7, 160-pound DeBrincat, the only established threat left in the Otters’ arsenal, scored a franchise-record five goals Oct. 1.

“I think that was definitely a time for me to prove that I can play,” DeBrincat said following fitness testing June 4 at the NHL Combine inside HarborCenter. “Those few games went pretty well. When Dylan got back, the chemistry just kept going.”

DeBrincat scored four goals and five points in his first outing as a winger beside Strome on Oct. 9. In 13 contests through the end of October, DeBrincat compiled a gaudy 17 goals and 25 points.

“He got off to an incredible start,” Otter coach Kris Knoblauch said.

“A lot of people … going into this year thought Alex would not have as great a season he had,” Knoblauch said. “He did. I think he matched it.”

Despite his diminutive stature, DeBrincat, who said he’s “proved people wrong my whole life,” could be a late first-round pick next Friday during the NHL Draft at the First Niagara Center. He said he talked to 21 teams at the combine, including the host Sabres, who have an NHL-high 12 picks, including the eighth and 38th selections.

“I think I showed (teams) I can play,” DeBrincat said about his 2015-16 season. “My size, I tend to get looked over a lot. But I think this year and last year I kind of opened some eyes and showed them that I can play hockey at my size.”

He added: “A big heart will go a long way, and that’s something I definitely have.”

DeBrincat’s size has dogged him throughout his career. It contributed to him getting bypassed in the OHL draft. The Otters signed him as a free agent after some scouts noticed him when they watched one of their picks play in a tournament.

Of course, DeBrincat possesses a slick skill set and some supreme hockey sense, including a knack for getting open and reaching scoring areas. But like most players his size, DeBrincat learned long ago he needed to showcase an edge and play with tenacity to succeed.

DeBrincat’s so competitive, Knoblauch said, he sometimes mixes it up with his teammates at practice.

“He’s all about playing with an edge,” he said. “He is feisty. He competes.”

A decade or so ago, a player like DeBrincat likely wouldn’t have been high on the radar, at least as a top pick. But while goal scoring hasn’t increased, the game has opened up, allowing talented forwards with shorter statures to thrive.

Players like Calgary’s Johnny Gaudreau and Chicago’s Patrick Kane are some of the NHL’s most lethal scorers.

“There’s a lot of smaller guys in the league now compared to a few years ago,” DeBrincat said. “I got lucky at the time I came in. I’m definitely thankful for that, a lot of successful people before me that are my height, so I think that definitely paved the way for me.”

DeBrincat tries to model his game after Montreal’s Brendan Gallagher, an aggressive winger the Canadiens list at 5-foot-9.

“Brendan Gallagher, he’s a feisty little guy and likes to score goals in front of the net, and that’s kind of what I do,” DeBrincat said. “He’s definitely someone I look up to.”