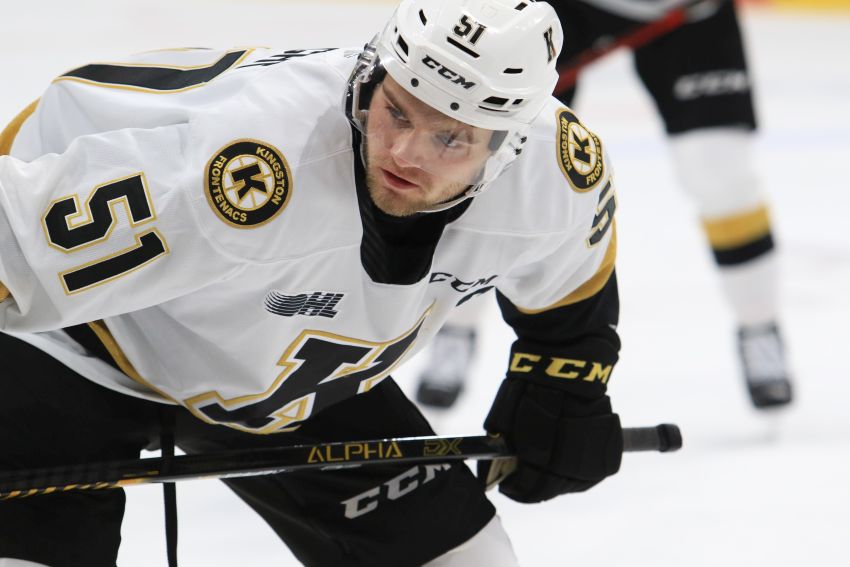 Shane Wright began playing in the OHL when he was just 15. ©2022, Robert John Boucher, Kingston Frontenacs

NHL Central Scouting recently ranked Shane Wright, a youngster so talented the Ontario Hockey League granted him exceptional status to play as a 15-year-old, No. 1 in its final evaluation of North American skaters for the draft.

Wright, a center for the Kingston Frontenacs, has thrived under intense pressure for three years, securing his place among the most dynamic prospects on the planet.

Still, Wright, who registered 32 goals and 94 points in 63 games this season, could last until the third or fourth selection.

“There are four players, the top two in North America and the top two on the international list, that could be in the mix to be No. 1, and that’s going to be dependent on who wins the lottery,” Dan Marr, the director of Central Scouting, told the Times Herald on Monday. “So there’s no slam dunk as to who the top player would be.”

The Buffalo Sabres, by virtue of finishing 24th overall, have 5 percent odds for the top pick in tonight’s NHL Draft Lottery. The Montreal Canadiens have the highest odds, 18.5 percent.

When the Sabres won the lottery in 2021 and 2018, they had finished dead last and possessed the highest odds. They parlayed those top picks into defensemen Owen Power and Rasmus Dahlin, two franchise cornerstones.

The Golden Knights finished 17th, so their selection (0.5 percent odds) cannot move up more than 10 spots based on the new lottery rules.

If that pick jumps into the top 10, the Sabres will receive Vegas’ first-rounder in 2023.

The Panthers’ pick isn’t in the lottery because they made the playoffs.

Whatever happens in the lottery, Marr said some terrific prospects will be available for the Sabres early.

“The rest of the first round, the teams are going to get a good player,” he said. “At the recent GMs meetings, I said, ‘You know, there’s not a bunch of quote-unquote superstars in this draft class, but there’s a lot of quality players that are going to be NHL All-Stars down the road.’ In the top 40 players, there’s going to be a lot of good players here.”

Marr said the 6-foot, 191-pound Wright has “a completeness about his game.”

“There’s no holes,” Marr said. “He’s going to physically mature, he’s got the size and strength. He’s an excellent NHL skater, very deceptive speed … good balance. His hockey sense is exceptional. He’s very quick-witted on the ice, (can) adapt and read and react quickly, make the plays. And he’s got the puck skills to go along with the speed and hockey sense to execute plays.

“And what we always found with him was peer-on-peer, he shows up and delivers and leads the charge. … He leads the way, he helps make others around him play better, and that also includes the way he competes.”

“A solid team player, play in the league, contribute for a long, long time and be one of your better players,” Marr said.

“The speed and quickness with his game is unbelievable,” Marr said. “And a lot of players who have that speed and quickness, it takes some time to get their feet and head going at the same pace. He’s accomplished that. He can stickhandle, he can make plays, he sees the ice and he can do it all at top speed. In that category, he is in the top of his draft class when it comes to playing the game at top speed.

The 6-foot-4, 218-pound Slafkovsky recorded five goals and 10 points in 31 games this season for the Finnish pro team. Slafkovsky also competed for Team Slovakia in the Olympics and will be playing in the World Championship later this week.

“Slafkovsky’s very interesting just because he stepped up his game and he seems to be able to adapt quickly,” Marr said. “He might be the most NHL-ready to make a run at getting into an NHL lineup just because he’s played three years (pro) now, he left home to play in a foreign country. …

“He’s got the experience, but he’s got the physical security to where he can handle it. But what you saw in the Olympics and that is that he’s like a sponge. He goes out there and he sees how the play goes and then he figures out the way how he can out and get things done.”

He added: “The World Championship could make the difference for him as to how high he goes in the draft.”

“(He’s) a very skilled playmaker, good vision, smooth hands, makes the plays, good finishing shot and he goes to the dirty areas,” he said. “He’s not the biggest guy, but he does compete well.”

The Rochester Americans begin their best-of-five AHL North Division semifinal series tonight on the road against the Utica Devils.