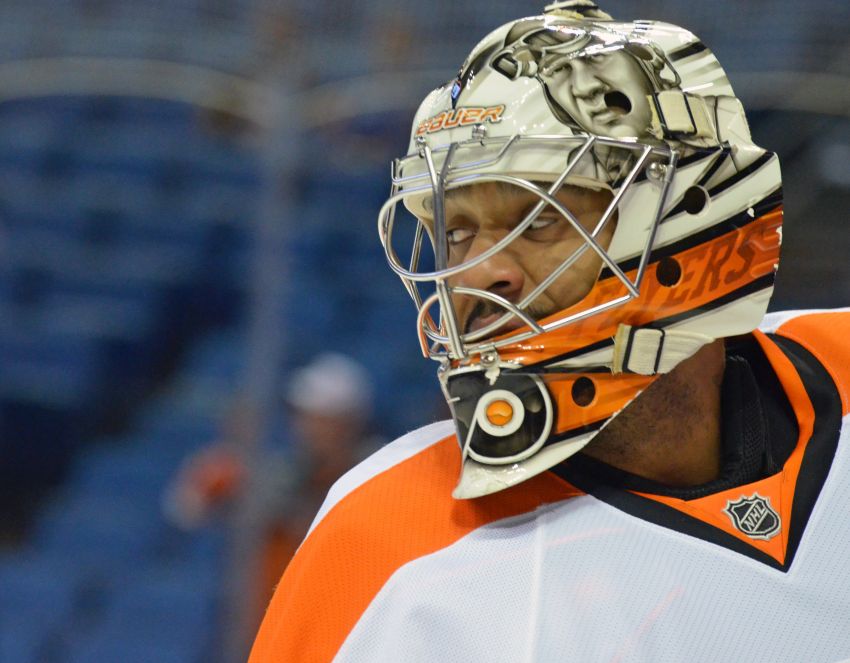 Ray Emery was known for his competitiveness. ©2018, Hickling Images

For years, Martin Biron only knew about Ray Emery’s ultra-competitive side.

Their 2007 fight, the centerpiece of a memorable brawl between Biron’s Buffalo Sabres and Emery’s Ottawa Senators, ranks among the wildest goalie scraps ever and provided the seminal moment of the teams’ fierce post-lockout rivalry.

“All I knew about was the guy that had a Mike Tyson head on his mask and wanted to fight everybody,” Biron told the Times Herald on Sunday night, hours after Emery, 35, drowned while swimming in Hamilton, Ontario.

When Biron was roasted last year, organizers wanted the colorful Emery to come to Buffalo and be the villain.

It would be perfect, right?

“Kind of carving me for the fight and carving the Sabres and carving Buffalo and all of that, because that’s really what you’re supposed to do,” Biron said.

“He felt uncomfortable,” he said. “He didn’t want to be seen in that way and that light. Obviously, I respected his decision and it showed me a different side of him that I didn’t know, right?”

Biron and Emery, of course, will forever be linked by their fight on Feb. 22, 2007, a bout ignited after Chris Neil concussed Sabres co-captain Chris Drury.

Still, Biron said he never spoke to Emery about the altercation.

“Our paths never crossed other than on the ice,” said Biron, who was replaced by Emery after leaving the Philadelphia Flyers in 2009. “I never thought of it as, ‘I got to speak my mind.’ It was none of that. It was just two men on the ice and two teams that hated each other and a series of events that led to everybody wanting to beat the crap out of each other.”

Emery’s competitiveness buoyed him throughout his often turbulent career, which ended in 2016. A year after a wretched playoff performance against the Sabres in 2006 – goalie Ryan Miller badly outplayed him – Emery beat Buffalo during the Senators’ run to the Stanley Cup final.

“He was a fighter in every sense of the word,” Biron said.

Years later, a condition in Emery’s hip called avascular necrosis, the death of bone tissue, threatened to end his career. He beat incredibly long odds to return, then found a second career as one of the NHL’s top backups, winning the Stanley Cup with the Chicago Blackhawks in 2013.

“It didn’t matter if it was him standing toe-to-toe with tough guys in the American League or even the NHL, or battling to win his job or stay in the league, or to battle through injury,” Biron said. “So he was a battler, so that’s what I remember most (about) him as a player.”