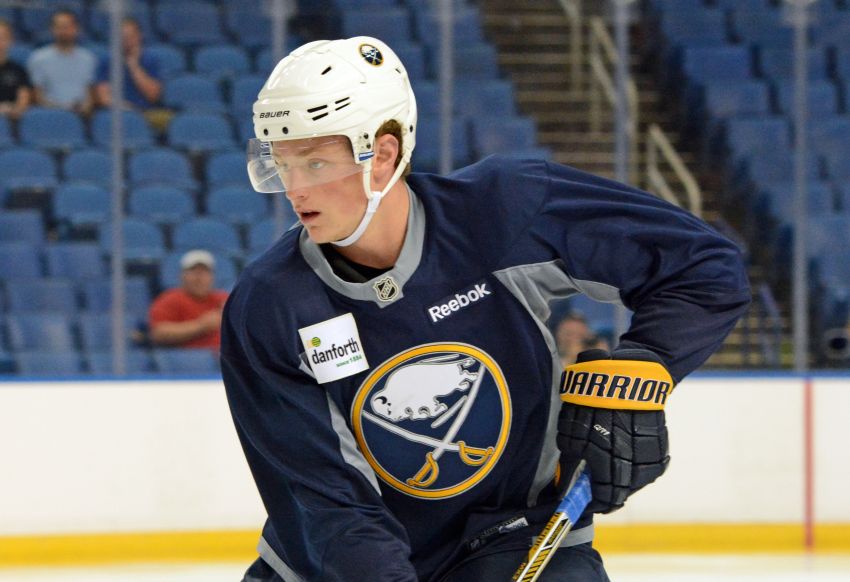 BUFFALO – At around 1:10 p.m. on Monday, most of the 1,000 or so Sabres fans on hand to watch development camp had their eyes focused on the tunnel next to the visiting bench waiting for a glimpse of Jack Eichel.

When the slick center finally touched the First Niagara Center ice for the first time in Sabres gear, the crowd cheered Buffalo’s newest phenom. Cameras snapped photos. Memories were made.

Minutes after hitting the ice, Eichel, the second overall pick June 26, skated down and wired his first shot past the goalie, earning more cheers.

Is Eichel surprised so many fans showed up to a practice on a weekday in the summer?

Eichel’s presence created the huge turnout. Many fans left after the 18-year-old’s session ended. But 46 prospects are in town, including center Sam Reinhart, the No. 2 pick in 2014.

Still, Eichel understands his every move will be scrutinized throughout the six-day camp. He just wants to blend in, be one of the guys.

“It’s the first taste of being someone who is highly touted, I would say,” Eichel said. “People have been talking. Obviously, there’s a lot of expectations around me, but it’s something I try not to focus on. I’m just trying to go out there, be myself on the ice every day, try to get better, be myself around the guys in the locker room. I think that’s what’s made me successful and the person that I am.”

To help Eichel adjust, the Sabres assigned Reinhart to room with him all week. Reinhart, having just experienced the attention and expectations that accompany being a high pick, can offer Eichel some advice.

“It doesn’t stop, and he knows that,” Reinhart said about the attention. “Watching … him go through all that draft stuff, he handled it phenomenally. He’s a mature guy and he knows exactly how to conduct himself on and off the ice.”

This week will give Eichel a much-needed opportunity to settle in following a whirlwind few months. After Boston University lost the national title game in April, Eichel represented Team USA at the world championship, went through a long pre-draft process and also had school commitments.

“I felt kind of bad for him, but now that he’s here he’s going to get comfortable,” said Sabres prospect Evan Rodrigues, Eichel’s former BU linemate.

Eichel said he hasn’t been in one place for more than a week since May.

“So I feel like I’ve been bouncing around everywhere,” he said. “It’s tough when you’re doing that to get into a routine of skating and working out, getting comfortable somewhere. Now that development camp’s here, I’m back on the ice, back working out every day, trying just to get acclimated to one place.”

Eichel, who signed a three-year, entry-level contract on Wednesday, was getting acclimated to his new teammates Monday. He wants to use this week to work on his play away from the puck.

“It’s the first day, we don’t really know each other that well, a little bit unfamiliar and a little bit uncomfortable,” he said about practice. “You … have new gloves on, maybe new pants. Everyone’s kind of a little hesitant at first. But I think as the week goes on people start to loosen up and get comfortable.”