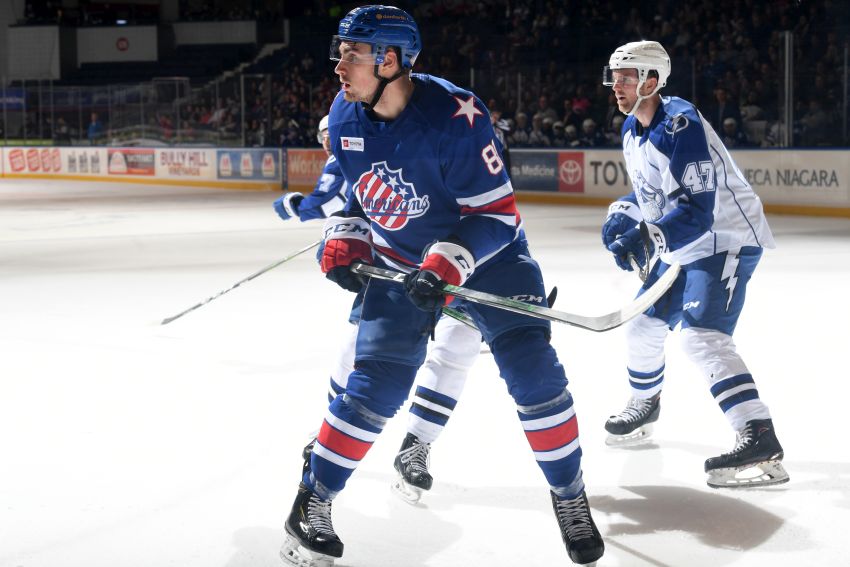 Forward Brett Murray has parlayed his strong rookie season with the Rochester Americans into a contract from the Buffalo Sabres.

The Sabres today announced the 6-foot-5, 236-pound Murray has signed a two-year, entry-level deal. Murray, 22, played on an AHL contract with the Amerks last season, scoring nine goals and 24 points in 55 games.

“Brett acclimated very well to the AHL and showed continued improvement throughout the season,” Sabres general manager Kevyn Adams said in a statement. “He has a unique blend of size and scoring ability and we’re excited to see his development continue.”

A year ago, it appeared Murray might never earn a chance to develop with the Sabres, who drafted him in the fourth round in 2016, 99th overall.

After leaving Penn State and returning to the junior United States Hockey League – he scored a league-high 41 goals for the Youngstown Phantoms in 2018-19 – the Sabres’ old regime challenged Murray to improve his conditioning up to pro standards.

As Murray reshaped his body, the Sabres kept rewarding him with invites to camps. Murray’s commitment impressed the Sabres enough during rookie camp last year he received an invitation to Rochester’s training camp.

He earned an AHL contract from former Amerks GM Randy Sexton, who was fired with GM Jason Botterill on June 16.