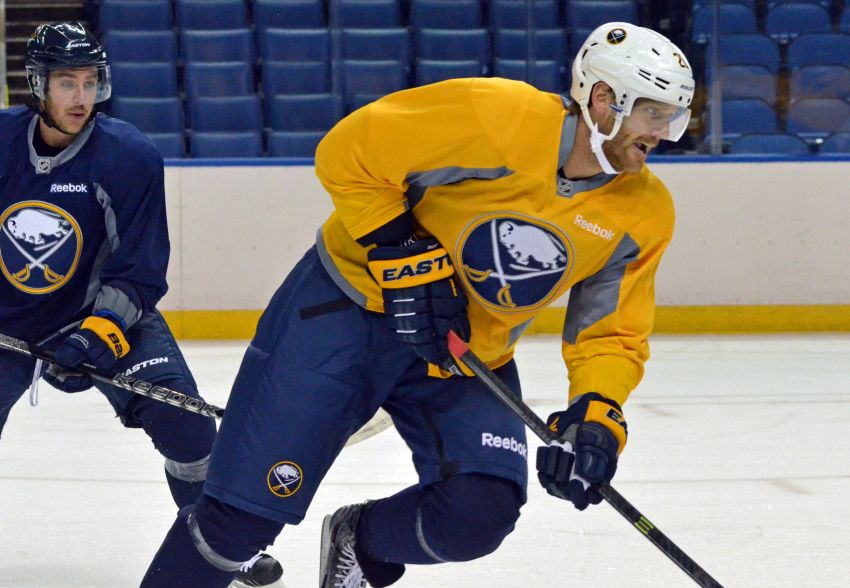 BUFFALO – This had been the thinking since July: the cash-strapped New Jersey Devils needed to unload money badly, so they dished Henrik Tallinder to the Sabres, who wanted the veteran back to help ignite struggling defenseman Tyler Myers.

A rocky relationship with some coaches, not money, forced his exit from New Jersey, Tallinder said Wednesday. And the 34-year-old has spent the first two days of training camp skating with Mark Pysyk, not Myers.

“I’m excited definitely to get away from New Jersey; not the organization, but a couple of individuals over there on the coaching side,” Tallinder said. “So every time I get to a new place I get excited.”

But this new place is really an old one. Tallinder played 468 games over parts of eight seasons with the Sabres, who drafted him 48th overall in 1997.

“I know all the people around here and it’s an easy transition,” Tallinder said. “Love the fans, love the arena. So it was a good call.”

Tallinder’s last season here, 2009-10, might’ve been his best. The smooth-skating Swede spent the entire year beside Myers, forming one of the NHL’s best defense tandems.

But the Sabres let Tallinder sign a four-year, $13.5 million deal with New Jersey that summer. Myers, meanwhile, hasn’t showcased his slick rookie form much since then.

So a reunion only seemed natural.

The two share a mutual respect. Tallinder called Myers “an exceptional young man.” He’s confident the 23-year-old will bounce back this season.

“When he came in his first year, I’ve never seen a guy that talented and that good at that age, or very few of them that I’ve played with at least,” said Tallinder, who will wear No. 20 since Christian Ehrhoff, Myers’ partner, wears his old No. 10. “I think he’s still young. I think you guys (the media) have been pretty hard on him, too. He’s going to be an exceptionally good player still. Just give him some time. Let him play.”

Myers said he kept looking up to Tallinder after he left.

“Even with how many people think he’s a good player, I still think he’s underrated,” Myers said. “It’s even better to have a guy back that presents himself the way he does off ice.”

Still, both players said they weren’t expecting to be partnered together again.

“I knew they weren’t bringing him back just to pair him with me,” Myers said.

Tallinder added: “I’m here to play for the Sabres. It doesn’t really matter who I play with.”

He’s just excited for a fresh start. He knew the Devils would likely trade him, although he wasn’t aware the Sabres were interested.

“I had a long conversation with the (New Jersey) GM after the season,” he said. “We both made it pretty clear what we wanted.”

After a strong first season under legendary coach Jacques Lemaire, Tallinder began souring on his New Jersey experience when DeBoer took over in 2011-12.

“When Jacques Lemaire was coaching there, he played me like a No. 1 D, which was awesome,” he said. “The coach he is with all his trophies and whatever, that’s really something I’m going to take with me from there. But sometimes, yeah, I had tough stretches.”

He added: “I didn’t have my best seasons when I played over there. I can play better than I did.”

Tallinder endured his toughest stretch midway through 2011-12, when he began dealing with acute thrombophlebitis, a blood clot in his lower left leg, an ordeal he called “very scary.”

“It’s serious business,” Tallinder said. “I didn’t think it would happen to guys that are really well trained.”

“That was the best experience ever,” Tallinder said about playing for the Cup.

“We didn’t create positive images for each other,” Tallinder said about his relationship with DeBoer.

That hasn’t ruined Tallinder’s outlook, though.