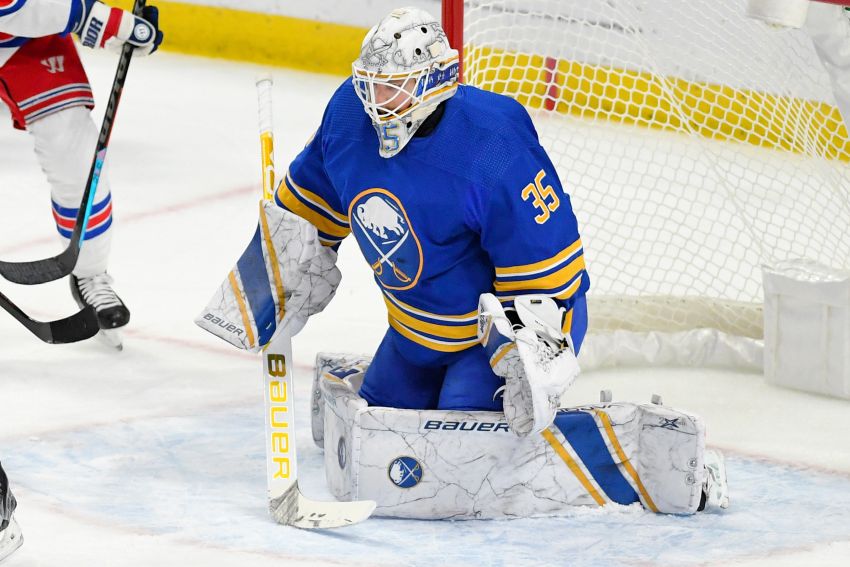 BUFFALO – Don’t let the score fool you. The Sabres had no business being in Thursday’s 3-2 loss to the New York Rangers, let alone reaching overtime.

The Sabres looked listless for two periods, generating little offense. They mustered only five shots in the opening period and a meager nine through 40 minutes.

Still, the Sabres hung around and stole a point, mostly thanks to goalie Linus Ullmark’s dazzling performance inside KeyBank Center.

“Linus got us a point, there’s just no way to dance around that one,” Sabres winger Sam Reinhart said on a Zoom call after Rangers rookie Alexis Lafreniere scored 2:47 into overtime. “A little too slow watching them skating around us, getting to pucks first. It’s not a recipe for success.”

In his fourth straight start, Ullmark looked sharp throughout, making 36 saves, including a point-blank stop on Lafreniere with the Sabres trailing 2-1 early in the third period.

“Linus started with that save and you could feel the boys rallying and the spirit was good on the bench,” Sabres coach Ralph Krueger said.

“It was good to see us within a game that was really bad from our side to find our game and get back on track,” Krueger said. “It was too little too late, but I was encouraged by that reaction in the third.”

He added: “It was one of those intermissions after the second where you don’t talk about it. It has nothing to with tactic, strategy or principles. It was testing our mettle and our fight.”

Ullmark kept making saves after the Sabres found some life, stopping six shots during a Rangers power play halfway through the third period.

“He was the best player for us by far and we wouldn’t have gotten a point without him,” Sabres captain Jack Eichel said. “So good to see him have a great effort, but we can’t rely on him like that repeatedly.”

Krueger said: “That was definitely Linus’ point today. We had two of our rougher periods in the season thus far. The first two were extremely disappointing.”

The Sabres abandoned Ullmark one final time in the extra session, allowing Lafreniere to easily convert a feed from former Sabres prospect Colin Blackwell. Lafreniere became the first No. 1 overall pick to score his first NHL goal in overtime.

If Ullmark consistently showcases the poise he did Tuesday, the Sabres can stay in any game. Ullmark credited luck and his teammates for his best effort this season.

“Today was one of those days where you kind of position yourself in a good spot where you can make those saves, and when I was not in position, I had my teammates that were blocking shots, a couple huge blocks in the second,” he said.

After Ryan Strome put the Rangers up early, Eichel tied the game at 1 in the waning seconds of the first period, charging to the net and connecting on Reinhart’s feed.

The Sabres’ woes against the Rangers can be traced to Tuesday’s third period, when they got outshot 15-2 but held on to win 3-2.

The Rangers, one of the NHL’s upstart teams last year, quickly morphed into an early-season disappointment, starting 1-4-1.

“We knew they would be desperate, we knew we would come with their A game, but we definitely didn’t match the fight or intensity,” Krueger said. “(Ullmark) gave us a chance to still win this game.”