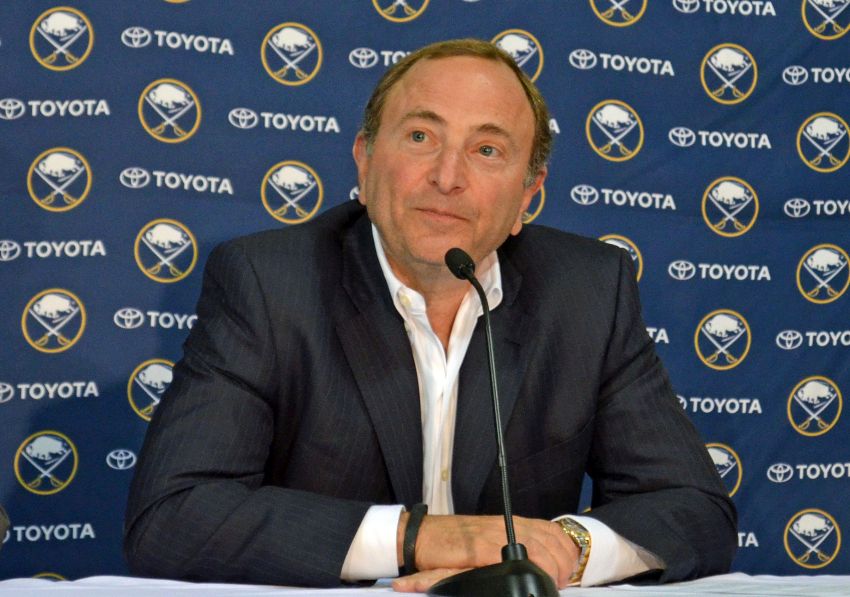 BUFFALO – The Sabres officially have the 2016 NHL Entry Draft. They plan to bid on an NHL All-Star game. The team has already secured the league’s scouting combine for the next two years.

Hmmm, what other big event could be in the works?

The Sabres had the first Winter Classic in 2008 at Ralph Wilson Stadium, a venue the Pegulas now operate as the Buffalo Bills’ owners.

“Just to tantalize you more,” Bettman said, “over lunch, Kim and Terry were saying, ‘Well, you know, it’s coming up 10 years, the outdoor games, maybe you should bring one of those here, and I said, ‘That’s interesting, especially since I can get a better lease on the stadium this time.’ So as it relates to NHL events, this is square and center on our radar screen.”

Bettman, who was in town for the draft announcement, has a long history of supporting Buffalo. When the Sabres went bankrupt in 2003, he stood by as the franchise trudged on without an owner.

These days, the Sabres have an owner pouring money into the city and team. The HarborCenter rink facility connected to the First Niagara Center is scheduled to open in a few weeks.

When the Sabres submit a formal application for the NHL All-Star game – team president Ted Black said they will – “Buffalo will get strong consideration,” Bettman said.

“We do not have a specific timetable,” Bettman said.

More from Bettman’s news conference prior to the Sabres’ 5-1 loss to the Anaheim Ducks:

– On the Pegulas purchasing the Bills: “My first reaction when I heard he was interested was the NFL would be lucky to have him. He’s a terrific owner, and I know how committed he is to Buffalo.”

– On the recent draft lottery changes – most notably, the odds of the last-place team getting the No. 1 pick have decreased from 25 percent to 20: “The competitive balance we have is so great the differences were not as profound as the way we had it laid out before.

– On if he’s worried about teams tanking for a chance to draft super prospects Connor McDavid or Jack Eichel: “Not at all. I don’t believe that based on my knowledge of the owners, the executives, the players in this league. That is simply not an issue.”

“The guys decided they wanted to go there to show their unity, their support for the great day, for the happy day for the Pegulas, and they wanted to be there to help celebrate with them,” Sabres coach Ted Nolan said. “So I thought it was a real classy move on the players’ side. They never got free tickets. They all bought their own tickets. It’s just a real good sign of support.”

Shouldn’t the Sabres be able to score some free tickets now?

“We might have the inside track on some of the freebies once in a while,” Nolan joked.

The Sabres made one lineup change, inserting Brian Flynn for injured winger Marcus Foligno, who could play tonight in Carolina against the Hurricanes, Nolan said.