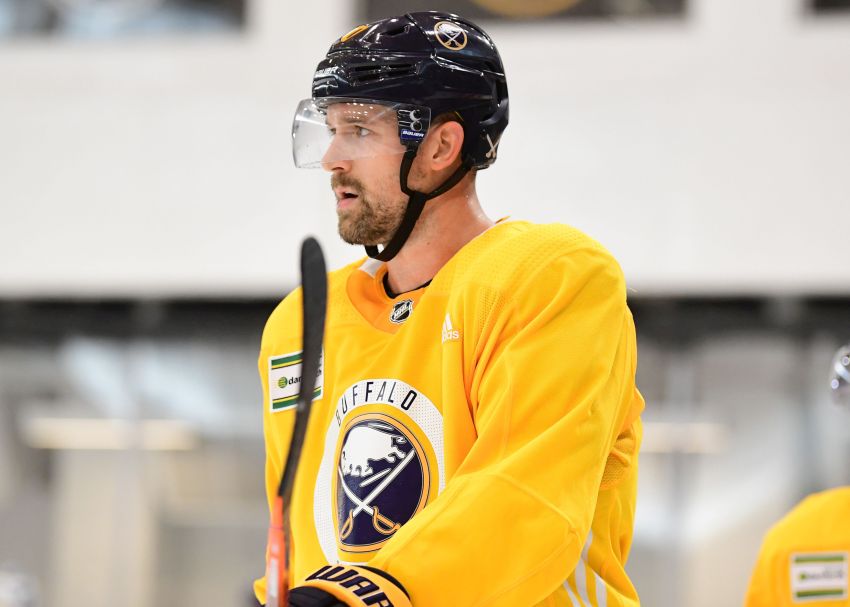 “Use your stick!” the Sabres center shouted, along with another word that can’t be reprinted, during a practice drill last week.

Some of Berglund’s new teammates then quickly burst out laughing. In the midst of an intense training camp, he provided some much-needed levity.

“This game’s about having fun,” Sabres coach Phil Housley said Monday inside KeyBank Center. “He enjoys coming to the rink and having some jabs at guys to try to get them off keel and try to get them on their toes.”

Berglund, a key piece from the St. Louis Blues in the Ryan O’Reilly trade, hasn’t played a real game yet for the Sabres. But in just a few weeks, the Swede, 30, has already established himself as one of their new leaders.

Clearly, the veteran’s personality, work ethic and past exploits have earned the respect of his new teammates, especially his fellow countrymen.

Five Swedes are on the roster. Four more participated in training camp.

“I’ve been calling him ‘The Godfather’ – all the Swedes just kind of follow him around,” Sabres center Jack Eichel said. “It’s good, though, he’s helpful.”

“It helps me kind of relax,” Ullmark said. “It’s just hockey. If you don’t love the game or you can’t bring the passion or happiness to the rink, it impacts the other players. But he’s one of those guys that come into the rink, he’s talkative, he’s fun and he goes out there and he brings his ‘A’ game every practice.”

When general manager Jason Botterill overhauled the Sabres during the offseason, he clearly focused on adding experienced, character players from winning backgrounds.

Berglund fits that bill. His 694 regular-season NHL appearances are second on the Sabres behind winger Jason Pominville’s 987. Berglund also competed in the playoffs six straight years before the Blues missed last season.

“His experience is the biggest asset right now for our guys to see how he plays, how he works,” Housley said.

Sabres goalie Carter Hutton, who spent the last two years with Berglund in St. Louis, said he’s the “ultimate pro” who “does everything right.”

“I can see why he’s had so much success in this league,” Hutton said. “He’s played a lot of hockey and he keeps himself in great shape. He’s a great guy and he’s definitely a guy we need in this locker room for these young guys.”

Housley plans to lean on Berglund heavily. Having compiled 168 goals and 322 points in his career, he’s one of the Sabres’ most established offensive threats.

Right now, the versatile Berglund is the Sabres’ No. 2 center. He said he played left wing last season but prefers pivoting a line. Housley has also utilized him on the power play and killing penalties.

Berglund said he knew the Blues, who drafted him 25th overall in 2006, would likely trade him. After a day or two, he started thinking about what he called a “new adventure.”

“It made me really excited to go play somewhere else, especially here, where I saw there was so much talent in this room,” he said.

He added: “I still have a lot of friends in St. Louis, teammates I played with for all those 10 years, all the relationships in the St. Louis community. I had a tough time kind of leaving that behind.

“But they will still be my friends even though I live in a different place. I was excited to come here and play.”

“Some guys hold their personality for inside the room,” Hutton said. “Bergy’s one of those guys. He’s quiet, you don’t get a lot out of him on your end, but he’s a great guy. I think he does a great job with all these young Swedes.”