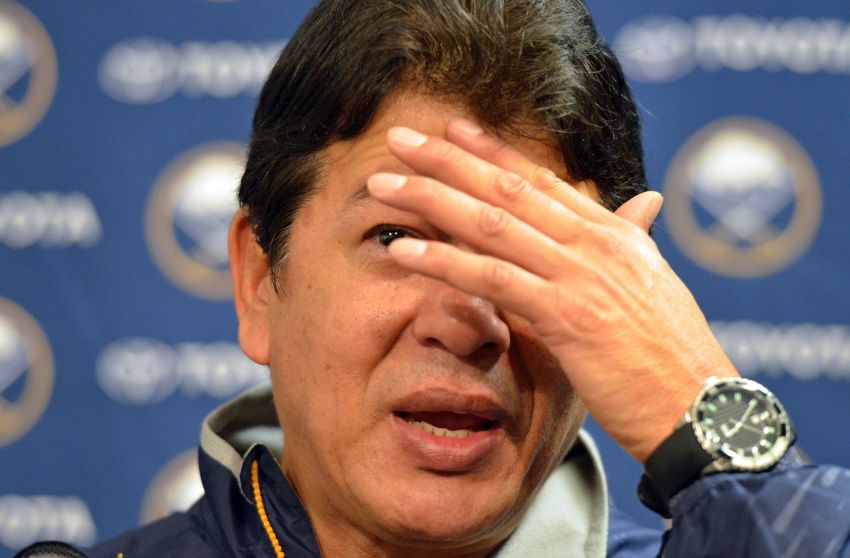 BUFFALO – The anger was visible today throughout the Sabres’ tense 90-minute practice inside the First Niagara Center.

At one point, coach Ted Nolan, whose 2-8 team was demolished 4-0 in Toronto on Tuesday, yelled, “Wake the (expletive) up!” Players exchanged words and yelled out in frustration. Captain Brian Gionta banged his stick on the glass and demolished it on the bench.

Nolan said he gives his teams a “10-game grace period” to start to a season.

Nolan’s usually mild-mannered and even-keeled. Clearly, Tuesday’s feeble effort, one of the worst losses in recent memory, embarrassed him.

Nolan keeps saying the Sabres have a good group of guys, something he repeated today.

The Sabres won’t win much if they don’t start scoring. They have 10 goals in 10 games, the fewest ever scored in the modern era in that stretch, according to the Elias Sports Bureau.

In other news, Nolan said rookie center Sam Reinhart will play his ninth game Thursday against Boston. The 18-year-old’s contract kicks in with his 10th. Goalie Jhonas Enroth will start.

Check back soon for a blog on Cody Hodgson and the new lines.

8 thoughts on “Frustrated Ted Nolan puts reeling Sabres through long practice: ‘Taking it easy is over’”