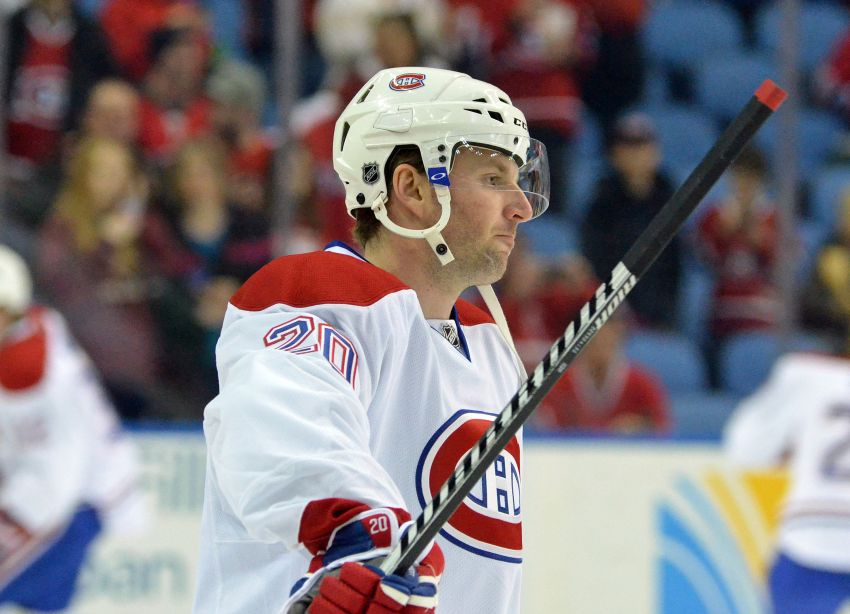 BUFFALO – Back in the summer, Thomas Vanek had a simple, straightforward question for the Sabres. The slick winger wanted to know what direction the team was going.

“No one really had an answer,” Vanek said Sunday prior to the Montreal Canadiens’ 2-0 win against Sabres, his first game back here. “That’s when I kind of made up my mind July 1 (unrestricted free agency) was probably a goal of mine.”

The Sabres, of course, traded Vanek, their co-captain, to the New York Islanders on Oct. 27.

“It looked like I was the last domino to fall, then things started to change,” Vanek said.

“I still follow it,” Vanek said. “It’s tough to see some of the guys go through it. But I think change is needed.”

The past five months have been a dizzying for Vanek, who scored 254 goals and 497 points in 598 games with the Sabres. Walking back into the First Niagara Center gave him “a little of the jitter.”

“I have a lot of good memories in this building, in this town,” he said. “It’s something I’ll cherish forever.”

The team honored him with a video montage during the first period. The capacity crowd of 19,070 fans – many of them Canadiens supporters – roared as Vanek waved.

“It was great,” Vanek said. “My previous experience when someone else came back (Jason Pominville), they didn’t do much. So I didn’t know what to expect, but I thought it was very nice and very classy of them.”

After nine seasons in Buffalo, the 30-year-old only lasted 47 games on Long Island, an experience he said he “loved.”

“I got to play with (John) Tavares and (Kyle) Okposo,” Vanek said. “I thought, as a line, we were one of the most dangerous lines. It was different, exciting (and) weird all at the same time.”

Still, weeks before the trade deadline, the Isles leaked details of a big contract extension he had turned down.

“I just thought it was – I don’t know what the right word for it is – unnecessary, I guess,” Vanek said about the offer getting out. “I don’t think it did good for both sides of us.”

“I think after that it was hard to focus,” Vanek said. “And even though the guys in the room on the island were great, I think they understood it was business. It was nothing against them.”

The Isles gave up a bundle to get Vanek – first- and second-round picks and 30-goal winger Matt Moulson – yet could only get a second-rounder and a prospect for Vanek before the March 5 NHL trade deadline.

Vanek has gone from playing in two small markets to arguably the biggest.

“Being in Montreal, it takes it to a different level,” he said. “I’ve been seeing four, five, six of you (media) guys. Now it’s 50. It’s a little different. I’m enjoying it.”

Vanek said he doesn’t have any hard feelings toward the Sabres. He made it clear after the Sabres traded Pominville in April he wanted no part of a long rebuild.

“I thought we were a good team, a solid core,” he said.

He traced the Sabres’ fall – they’ll miss the playoffs for the fifth time in seven years this season – to losing co-captains Daniel Briere, a Montreal teammate, and Chris Drury on July 1, 2007.

“We always talked about getting to the next level, but if you really look back at what happened, Danny and Chris left at the time,” Vanek said. “They told us (young players) to step up, which was great. We all wanted that to happen. But we never replaced two good players with essentially nobody.

“In this league, you need depth. I think five, six players can only take you so far. The way I look at it, I wish we would’ve gotten two, three, four more good guys, really could’ve made some runs.”