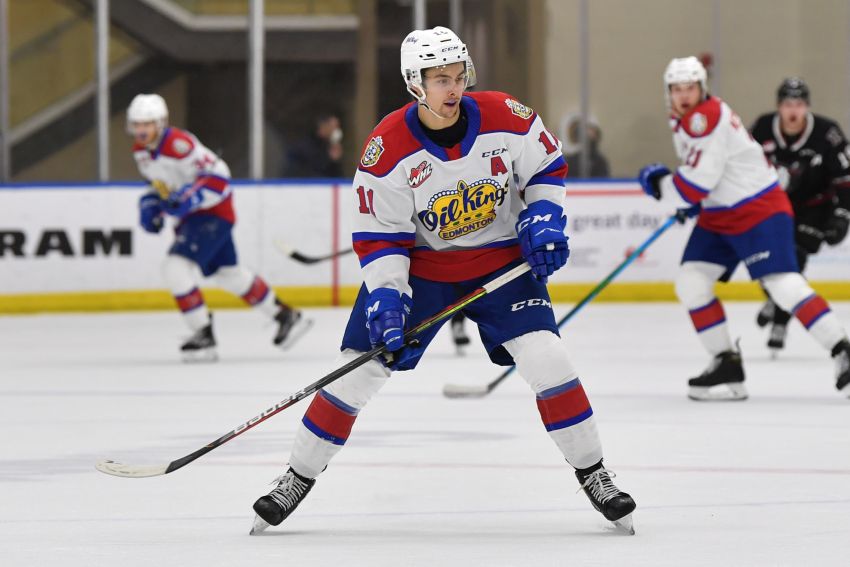 NHL Draft prospect Dylan Guenther was just 15, a neophyte up for his first taste of major junior hockey. Still, despite being one of the league’s youngest players, the winger turned heads during his eight-game stint, utilizing his lethal shot to score three times.

Those exploits in the 2018-19 season would be a harbinger for his junior career. Guenther has developed into a dynamic scorer – he recorded 12 goals and 24 points in only 12 games for the Oil Kings last season – and one of hockey’s most intriguing prospects.

NHL Central Scouting ranked Guenther fifth in its final list of North American skaters for the 2021 draft, meaning he will likely be among the top picks July 23.

The Buffalo Sabres, of course, own the first overall selection. While it’s believed they will draft Michigan defenseman Owen Power, they could receive another top-10 pick if they trade captain Jack Eichel, center Sam Reinhart or defenseman Rasmus Ristolainen.

Guenther, who possesses what Lauer called “elite hockey sense,” boosted his draft stock despite playing only 23 total games during a 2020-21 campaign ravaged by the COVID-19 pandemic.

“He was dominant, yeah, he did some things on the ice where you were like, ‘OK, that’s pretty special,’” Lauer said.

When rinks were closed in Alberta, Guenther said he tried to find ways off the ice to improve his game.

“Those were definitely tough times, and I had to continue to just kind of push and find ways to do stuff off the ice that would translate to on-ice play,” Guenther said on a Zoom call Tuesday. “I think I did a good job of that. And then during the season, I think just taking advantage of every game you play.”

In addition to participating in the abbreviated WHL season, Guenther played four games on loan to the Alberta Junior Hockey League’s Sherwood Park Crusaders and seven contests for Team Canada at the Under-18 Men’s World Championship.

“This guy is a natural scorer,” said Dan Marr, the director of Central Scouting. “He can score any type of goal in any position. He’s just got that type of a game. On the power play he’s always a threat. He’s the guy that gets set up to get the one-timer. He’s a guy that can utilize his size and strength to get to the net and make the plays.

“One player we were comparing him to is (Anaheim Ducks center) Ryan Getzlaf. He’s got that ability to dominate on the play, both physically and with his skills.”

Guenther’s smarts complement those assets. Lauer said the youngster understands the options other players have on offense and defense, so he can predict the next play.

“He’s able to kind of see the next play ahead of the play,” Lauer said. “So … instead of wasted energy to chase around the puck, he has that understanding of where that puck could possibly be going next, and he’s able to get a good jump or get available for an offensive play or a defensive play.”

His ability to process the action so quickly often helps Guenther get in position to unleash his shot.

But he doesn’t simply rely on his shot. Lauer, who might move Guenther from right wing to center next season, said he pays a price to score goals.

“A lot of his goals are driving wide, attacking wide, taking pucks to the net,” he said. “He is a player that is next level, a very special player. You don’t get a lot of these guys in your organization very often.”