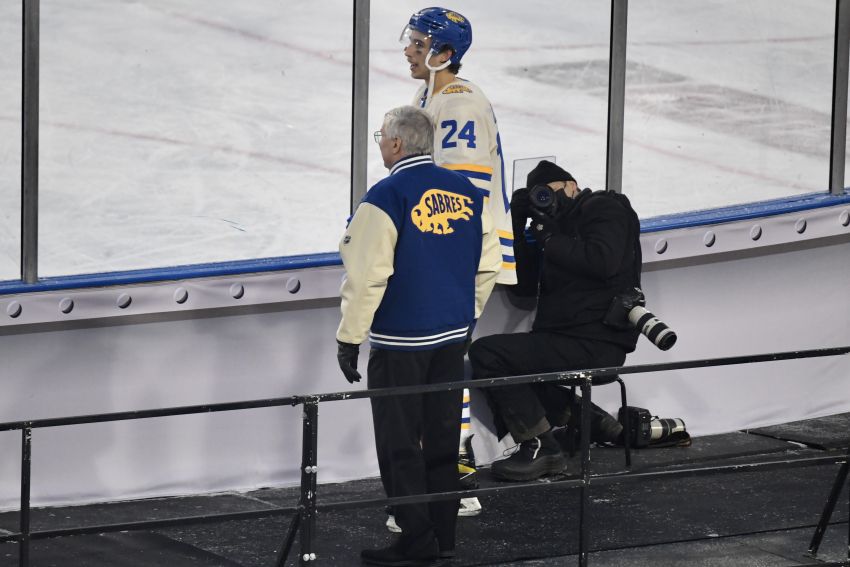 Dylan Cozens found a spot next to Buffalo owner Terry Pegula after being kicked out of Sunday afternoon’s Heritage Classic. ©2022, Micheline Veluvolu

BUFFALO – Dylan Cozens only remembers Terry Pegula mentioned the cross-check on Rasmus Dahlin. The rest of his interaction with the Sabres owner following his ejection from the Heritage Classic is a little fuzzy.

“I’m gonna be honest, I had a lot of adrenaline going so I don’t really remember too much,” the center said following Tuesday’s practice at LECOM Harborcenter.

The maturation of a young team is often filled with seminal moments, and the Sabres’ emphatic response after Auston Matthews cross-checked Dahlin in the neck late in Sunday afternoon’s 5-2 win felt like one of them.

“That whole sequence of events was … a pretty big moment for our team,” Sabres winger Kyle Okposo said of the final minutes outdoors against the Toronto Maple Leafs. “Obviously, the cross-check from Matthews was not good. I don’t care that he’s their best player. When you do it to arguably our best player, you’re going to get a response. I don’t care who you are on the other team.

“I think that’s what that showed, and Dylan did a great job.”

But an opportunity materialized to lay a clean hit him, so he seized it.

“Just seeing what he did to Ras, that was a really dangerous cross-check and a dirty cross-check by him so I decided to go out there and finish my check on him,” Cozens said. “Obviously, a couple guys didn’t like that but I’d do it again if I had to.

“Rasmus Dahlin’s a guy, he’s a star player, a young defenseman, one of the best defensemen in the league. He’s going to be a great player for us so he’s a guy that anyone on this team would stick up for.”

When Toronto’s Michael Bunting retaliated and hit Cozens, a melee ensued and they nearly fought with less than two minutes remaining at Tim Hortons Field in Hamilton, Ontario. They each received 10-minute misconducts.

Cozens wanted to stay and celebrate with his teammates, so instead of making the long walk to the dressing room, he stood outside the rink near Pegula.

“It was pretty cool, him coming over and talking to me,” Cozens said of Pegula. “The boys loved that. But it was a great game all around, so I think we showed a lot of people what we’re all about and how close of a group we are and that there’s a lot to be excited about here.”

“You just do that when you feel comfortable to do that, and you feel that’s the right thing,” Granato said. “So … we need these guys in the moment so they can read and react and feel their emotions.”

Okposo said the camaraderie and cohesiveness the Sabres enjoy “can’t be faked.” They play so hard for each other because they like one another.

“It’s something that has to happen when it’s supposed to,” he said. “It’s not like you can force that, you’re going to force guys to go hang out together or do things together. It’s something that’s happened very organically and naturally. …

“That stuff just happens through the people you have in the room and how much people care.”

Cozens said: “We showed a lot lately about how close we are as a team and we are brothers. Even in practice we battle like brothers and then on the ice in games, we battle together. So we’re kind of just growing up together.”

Okposo said on Tuesday, some of the Sabres who haven’t been playing were on one side of the ice doing one-on-one drills.

“Next thing you know, you got 15 guys down there doing one-on-ones with each other because we love the game and we just want to play and we want to be better,” he said. “I think that says a lot about our group.

“But in saying that, we still have a long way to go. This isn’t a finished product by any means. We’re going to have to continue to take steps throughout the rest of this year and over the next few.”

The Sabres, of course, have earned just 20 wins this season. But the last two – on Thursday they beat the Vegas Golden Knights in Jack Eichel’s return – are their biggest in a long time.

Okposo hopes the Sabres, who start a three-game road trip Thursday against the Edmonton Oilers, can capitalize on the momentum they’ve built.

“We take the experience from it and just use it, mature from it, realize that we’re starting to take some steps here,” he said. “I think it was definitely a positive step in the right direction.”