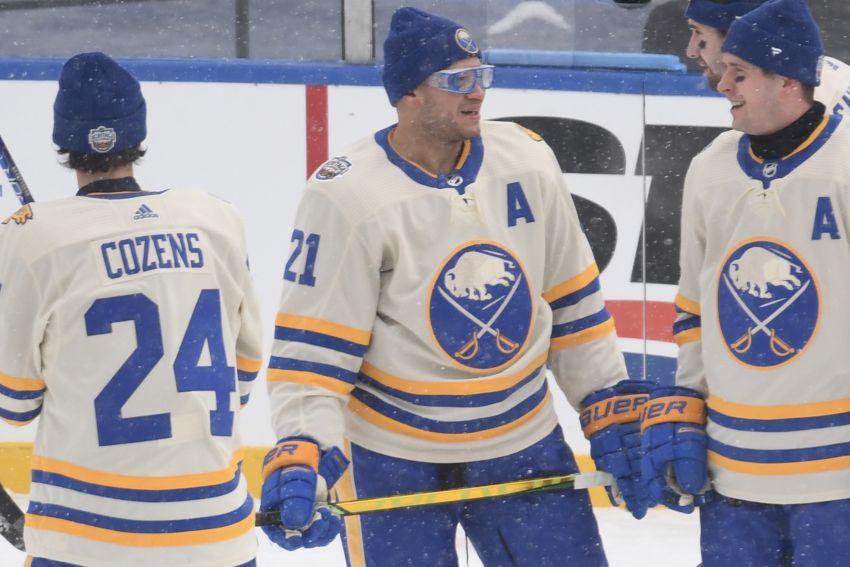 BUFFALO – The original plan called for the Sabres to step off the bus Sunday afternoon and walk into Tim Hortons Field for the Heritage Classic wearing “Canadian tuxedos.”

Teams playing outdoors make grand entrances in costumes, and the all-denim look – a jeans jacket worn along with a pair of jeans – seemed perfect for the game in Hamilton, Ontario.

But on Feb. 26, Tampa Bay Lightning players sported a similar denim look as they entered Nissan Stadium for their outdoor game against the Nashville Predators.

“So then we started scrambling,” Sabres winger Kyle Okposo explained following Tuesday’s practice at LECOM Harborcenter. “We had a backup idea, but it was a little bit underwhelming, so then we were just sitting, talking about (it), and we’re like, ‘We should do that.’ Eaks mentioned (it), and everybody was like, ‘Yup, let’s do that.’”

Center Cody Eakin’s idea was to dress up in full Flint Tropics uniforms – jerseys, shorts and headbands – just like Will Ferrell wore in the 2008 basketball movie Semi-Pro.

Eakin ordered the uniforms – it was too late for the Sabres to sport their own numbers – and they turned heads Sunday as they walked into the venue.

“Perfect world, we would’ve loved to get all of our own numbers,” Okposo said. “But we just ordered whatever we can find.”

Okposo even wore sports goggles with his Tropics uniform. He later put on a different pair for the pregame warm-up.

The Sabres, of course, won the game, beating the Toronto Maple Leafs 5-2.

“Those experiences are something that are guys are going to remember for a long time,” Okposo said of the Heritage Classic. “I was just really happy and proud of the group that we were able to have some but then dial it in and buckle it down and play a really good hockey game.”

“I’m so happy, I can’t even feel my arms!”#LetsGoBuffalo pic.twitter.com/DycmKToHXR