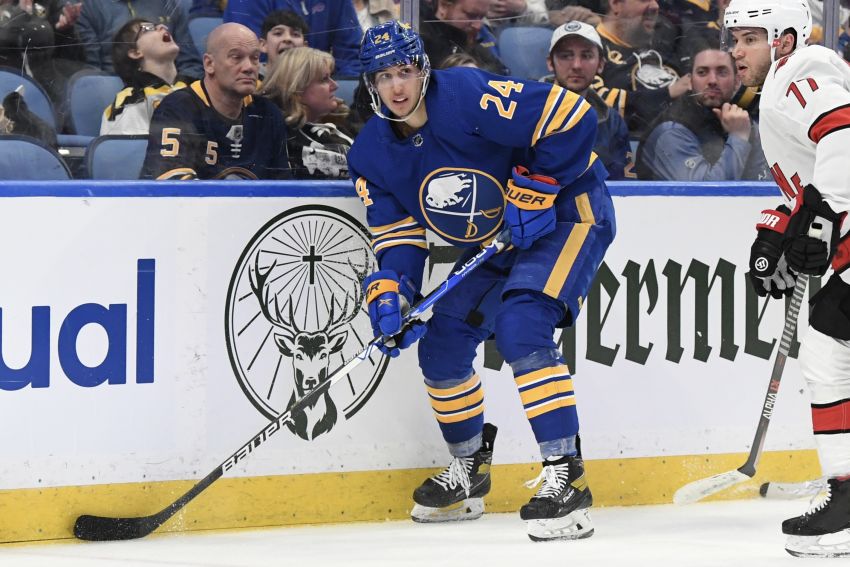 But Cozens, 21, also acknowledges he’s “a competitive guy.” Sometimes his patience can be tested.

“I know how good I can be, and I want to be that good now,” Cozens said following Wednesday’s practice at KeyBank Center. “But Donny (Granato) told me, I’m young, playing against lots of guys a lot older than me, so I’ve just got to be patient, not get frustrated and not push for it to be now. Just focus every day on getting better and learning and just letting it come naturally, not forcing it too soon.”

So Cozens, the seventh overall pick in 2019, has been focusing on perfecting the details in his game as he tries to reach his enormous potential. Granato, meanwhile, has been stressing to him that success often isn’t measured in goals and assists.

On some nights, it might simply be winning a battle, making the proper decision or protecting the puck.

Granato said zeroing in on aspects like those has probably affected Cozens’ scoring. The Yukon native ended a 17-game goal drought in Tuesday’s 4-2 win over the Carolina Hurricanes, scoring for the first time since Feb. 25.

“I’m 21 years old playing in the NHL, I know it’s not going to be easy, I know they’re not just going to come,” Cozens said of scoring goals. “So I just try to stick with it. I think while I wasn’t scoring I was still producing a lot, a lot of assists and stuff, still playing really well through all things right, just nothing was really going in for me. So didn’t really get too frustrated.

“Obviously, we were winning games so it’s a lot of fun and that’s all I really care about.”

In the long run, Granato said Cozens will be better off for embracing a patient approach to his development.

“He’s been able to focus on the things, the areas that he can improve on, which will make him a better hockey player,” said Granato, whose Sabres open a four-game road trip tonight in Carolina. “A lot of times … the focus for these young players and all players trying to prove they belong, in their mind it’s to try and score.

“The guys that have the focus on ‘OK, how do I get better?’ are the ones that are going to stay in this league and progress through this league, and he’s on target for that.”

In scoring a power-play goal at the net late in Tuesday’s win, Cozens illustrated some of his growth. He has learned to better utilize his 6-foot-3, 189-pound frame and be harder on pucks.

“He had to fight and battle and use his body position just to get a touch on the puck,” Granato said. “That’s all he needed to score, this one little touch.”

Despite a five-week stretch between goals, Cozens has been a tenacious presence and consistent contributor, registering eight assists during the Sabres’ 10-4-3 run.

“I love what he’s doing, he’s progressing every day,” Granato said. “To further compliment him, he always has that bite, he’s always, always competitive. He does so much more for us that score. He’s a leader by virtue of the competitive effort he has.

“We talk about our team coming back late in games and never saying never dying, and we looked sloppy in one and the next segment, we always have a rise, and he’s the type of personality and player that helps us do that, that drags the other players into the fight.”

Cozens has also committed to improving his faceoffs skills. Over the first two months, he won 42.5 percent of his draws. He has upped that overall number to 45.1 percent.

“It’s a huge thing starting with the puck,” Cozens said. “There’s been times I’ve been frustrated on my faceoffs but as of late I think I’ve stepped up there.”

Cozens studies his faceoffs and strategizes what he can do differently. He said assistant coach Jason Christie also helps him.

“Just really focusing every time really hard on winning the draw and kind of learning what the guy against you is doing and switching up as you go,” said Cozens, who has often been centering Peyton Krebs and Vinnie Hinostroza. “I think early on in the year I kind of just didn’t have much in mind, you know lots of different things I could do. I think as the season’s gone on, I’ve learned other ways to take draws and if I’m not feeling it, switch it up.”

One thought on “Dylan Cozens ‘progressing every day,’ becoming trusted talent for Sabres”