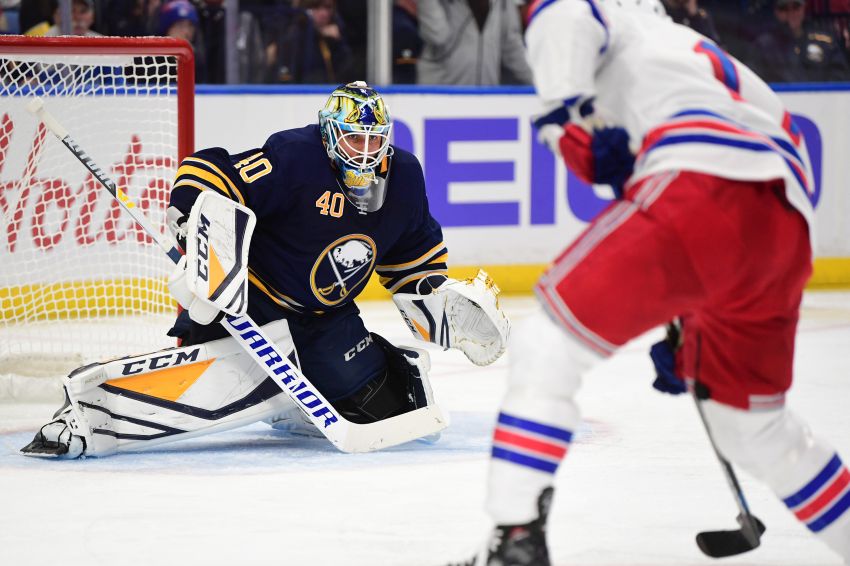 BUFFALO – It was hard to tell which moment in Saturday’s 3-1 win against the New York Rangers generated the bigger roar from Sabres fans.

Winger Conor Sheary’s power-play goal 13:15 into the tilt, a perfect shot from the left circle into the far corner, ignited the crowd of 16,824 fans inside KeyBank Center.

So did goalie Carter Hutton’s splendid save on Rangers center Brett Howden, which stymied a three-on-zero shortly after Sheary’s second power-play goal.

Sabres coach Phil Housley said that dynamic stop even brought the bench to its feet.

Hutton, who made 43 saves in the Sabres’ first win, said: “It was nice to hear the roar of the crowd.”

Unlike Thursday’s 4-0 opening-night loss to the Boston Bruins, the Sabres gave their fans plenty to cheer about Saturday.

“We knew this was an important one,” Sheary said. “We kind of got spanked in our home opener.”

When the Sabres added Sheary and Hutton during the summer, they believed they would be huge contributors to a team whose feeble offense and wonky goaltending contributed to a 31st-place finish.

In Buffalo, Sheary, who often skated beside superstar Sidney Crosby in Pittsburgh, is playing with top center Jack Eichel. Hutton, a career backup, is in his first days as a regular starter.

It took just two games for them to provide an impact. Fresh off an ugly effort, the Sabres looked sharper throughout Saturday’s contest.

Sheary scored his second goal 1:42 into the second period, one-timing winger Sam Reinhart’s pass from below the left circle.

“We knew this was an important one,” Sheary said. “We kind of got spanked in our home opener so we wanted to come out and have a strong effort. It was good to have two points tonight.”

That was enough offense for Hutton, who won his 64th NHL game.

Housley said Hutton’s save on Howden 4:54 into the second period – he moved over and blocked the shot with his arm – is one of the saves of the year.

“One of those ones you just look up and you’re like, ‘Oh dear,’” Hutton said. ‘I just tried to be patient on it. I think they kind of overplayed it. I think they made one too many passes and it gets jammed up. I’m patient enough that I get my edge and get a push over and make a save.”

Late in the game, Hutton made a point-blank stop on winger Jesper Fast.

“He changed the momentum for us a few times in that game,” Sabres center Evan Rodrigues said.

Howden finally beat Hutton 15:21 into the third period on the Rangers’ 40th shot.