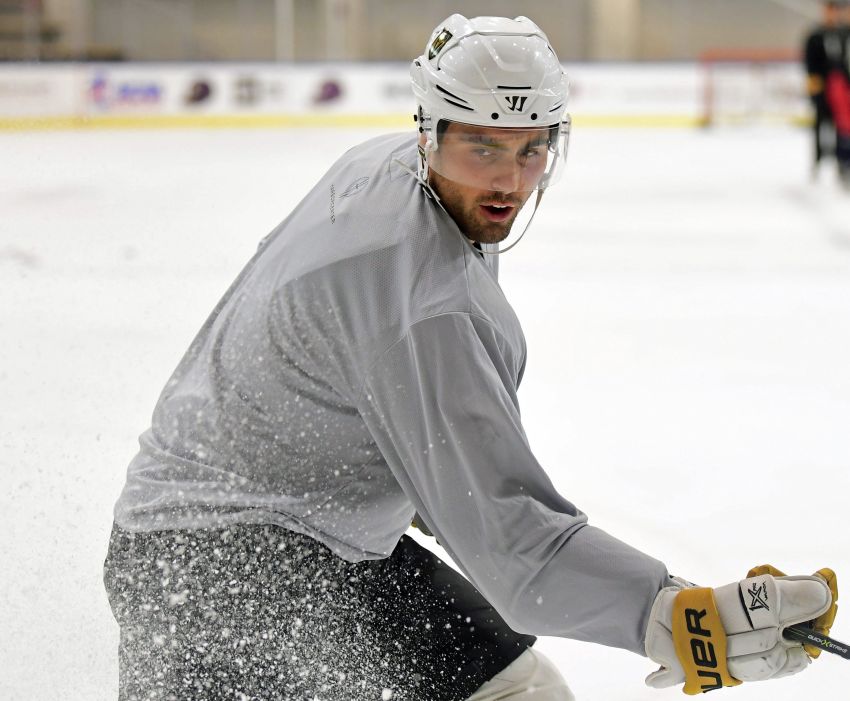 Vegas’ Alex Tuch, who grew up in Syracuse, has 13 goals and 30 points as a rookie. ©2018, Hickling Images, Olean Times Herald

Everyone on the Golden Knights, the greatest expansion team in NHL history, seems to have a chip on his shoulder.

“I didn’t think it was going to be a big deal at all, but the way the guys played against their old team, it definitely was a big deal early on,” Gallant said Friday after the Golden Knights prepared for this afternoon’s tilt against the Sabres. “We didn’t talk about that very much. Maybe the players do individually.”

A lot of things have buoyed the NHL’s 31st team to unprecedented success.

The NHL changed the expansion draft rules so the Golden Knights could pick assets from other teams, not journeymen. The newcomers quickly seized the bigger opportunities a club starting from scratch presented them.

But the players’ strong desire to stick it to their old teams should be at the top of the list.

“We all came from different places, we all want to do well,” said goalie Marc-Andre Fleury, perhaps the Golden Knights’ only true star. “Every night somebody plays against his old team and we all help him have a good game, help him have a win.”

“They didn’t protect you and didn’t necessarily want you,” Marchessault said. “It’s definitely hard to take, but it’s a hard business also. You’re never safe. We came in and everybody wants to be a part of history, want to be part of something great.”

The Golden Knights, who rank first in the Pacific Division, have already made plenty of history. Thanks to a stunning 43-19-5 record, they have a whopping 91 points entering their first visit to KeyBank Center.

The Golden Knights won eight of their first nine games, including a 5-4 overtime triumph against Buffalo on Oct. 17. They recently set expansion records when they earned their 34th win and 84th point. Thursday’s 4-0 win in Detroit, their 19th road victory, tied the all-time expansion record the Mighty Ducks of Anaheim set in 1993-94.

At this point, are the Golden Knights really still an expansion team?

“We don’t really talk about (being an) expansion team anymore,” Gallant said.

While Gallant never expected so much success so soon, he knew he had a strong team.

He added: “Everybody took advantage of their opportunities. We knew we had some good hockey players, but we didn’t think the guys would take advantage like the Karlssons.”

Karlsson is center William Karlsson, who has scored 35 goals and 60 points through 67 games, gaudy numbers no one expected. In the previous two seasons with Columbus, the Swede compiled 15 goals and 45 points in 162 games.

The Golden Knights already have four 60-point players. The Sabres have had one 60-point player – center Ryan O’Reilly in 2015-16 – in the last five seasons.

“A lot of teams got a lot of good hockey players, but there’s not many (Evgeni) Malkins and (Sidney) Crosbys in the NHL,” Gallant said of the Pittsburgh superstars.

Marchessault said “everybody’s humble, happy to get together.”

“We knew right off the bat that if we were going to win games, (it’s) not because we were talented, it’s because we worked harder than the opponent,” he said.

To Gallant, his team’s “work ethic is second to none.”

In the beginning, Marchessault said, the success surprised the Golden Knights.

“We were always wondering if we were going to keep the pace up,” he said. “After Christmas, when we kept winning and winning, we kind of knew we had a good team and teams were coming to Vegas or waiting for us away and they were ready for us. They were big challenges.”