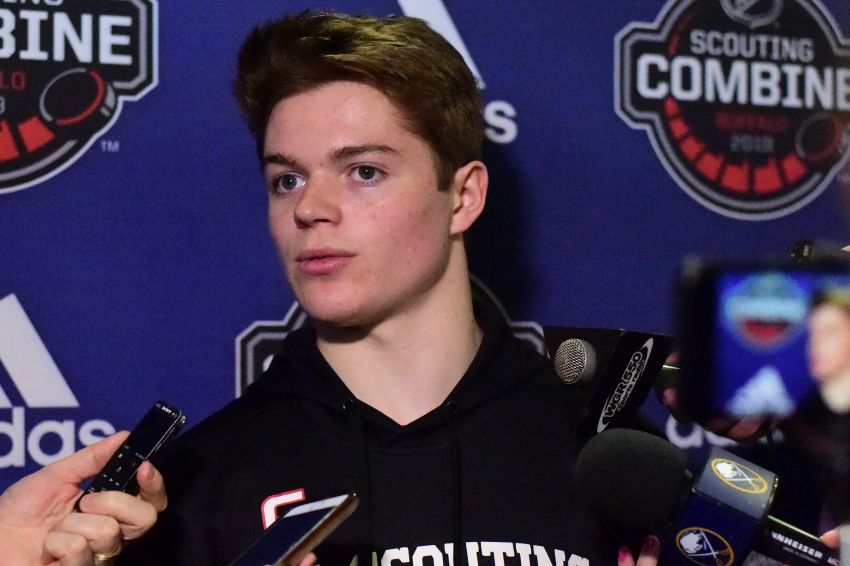 Barely two years ago, fresh off a dynamic high school season in which he compiled 50 goals in 22 games, Caufield suddenly lost his scoring touch at the U.S. National Team Development Program tryout camp.

In five or six games against bigger and better competition, the 5-foot-7 Caufield couldn’t muster one goal.

But Wroblewski, who coaches the under-18 squad, wanted to see if Caufield possessed what he called a “B game.” So he studied the youngster closely.

“I kept asking myself if he does enough other things if he’s not an elite goal scorer,” Wroblewski said. “He constantly displayed IQ and elite playmaking to make my answer ‘absolutely yes we’re taking him.’”

Of course, it wasn’t quite that easy to award Caufield a roster spot. His camp, at least on the surface, looked disappointing. He is also undersized.

Still, Wroblewski vouched for Caufield’s talents, and the program kept him.

“It was something it kind of opened my eyes,” Caufield said of his tryout experience. “I really needed to start working harder at it. I got the chance to make the team, so I took the most of it. I think I never looked back.”

Today, Caufield, 18, is one of hockey’s most coveted prospects. On June 21 in Vancouver, he should be a top-10 pick at the NHL Draft. NHL Central Scouting rated the Wisconsin native the No. 8 prospect among North American skaters.

The Sabres, who own the seventh selection, need a center. But if Caufield is available, he might be too good to pass up. The scoring touch he briefly lost quickly materialized again with the USNTDP.

“To say it was a coming-out party, no,” Wroblewski said of Caufield’s season. “But I think it was a kick-down-the-door party.”

Ten or 15 years ago, Caufield’s size likely would’ve scared some NHL teams away. He almost certainly wouldn’t have been pegged as an early pick.

The game has evolved. Skill and speed are coveted now more than ever. The game has never been faster.

Some of the NHL’s top players are generously listed at 5-foot-something. Caufield uses them as role models.

“It’s just pretty special looking at what DeBrincat did for the league, guys like (Cam) Atkinson, even (Brendan) Gallagher and (Jonathan) Marchessault,” Caufield said Saturday at the NHL Scouting Combine inside Harborcenter. “I think all those guys having success at the top level, being slight guys, I think it’s given guys like me hope.

“The way the game’s changed, it’s all speed and skill. I don’t think size is a big risk anymore. I think that’s why guys like me can have a big impact.”

Caufield, who weighs 162 pounds, looks at his size as an asset.

“(I like) my ability to get lost and bounce back,” Caufield said. “I think if I was taller, I wouldn’t be the player I am today. So I think it’s kind of an advantage and it helps me in a way.”

Caufield, who has committed to play college hockey at Wisconsin, doesn’t lack confidence. When asked who was the best scorer in the draft, he quickly replied it was him.

Wroblewski believes an NHL team could utilize Caufield on the half wall, where he can unleash his lethal shot.

He added: “This kid can skate, flat out. He’s got breakaway speed.”

Still, to Wroblewski, Caufield is more than just a goal machine.

“People kind of sequester him into a goal scorer, where I think that’s kind of the icing on the cake for him,” Wroblewski said. “He’s an all-world player with regard to vision and playmaking. I trust him all the time. With a one-goal lead or our goalie pulled, I’d have him on the ice.”