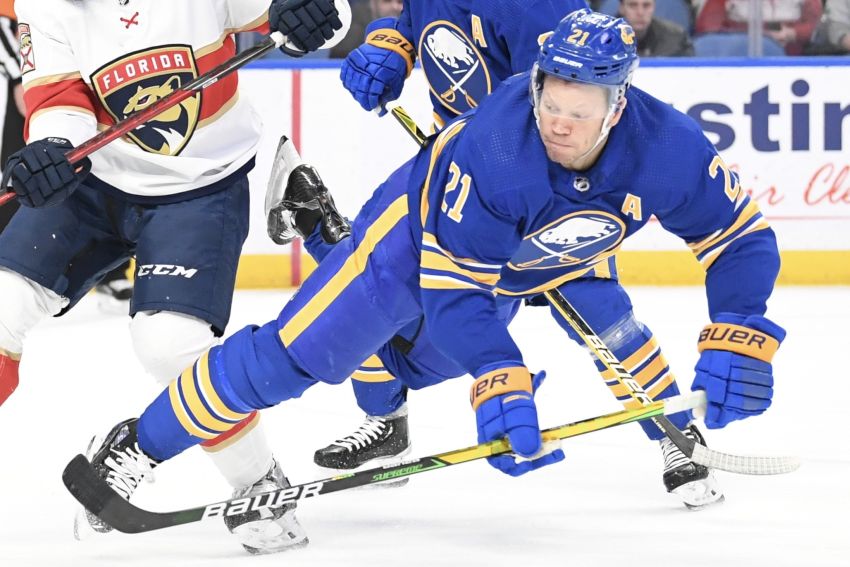 BUFFALO – Sabres winger Kyle Okposo’s ability to remain an impactful NHL player in his mid-30s can be traced to his willingness to keep reinventing himself and evolving.

Two seasons ago, after battling a string of scary concussions, he revived his career by embracing a new checking role and thriving in it. That comeback turned out to be a harbinger for this year.

Following an injury-riddled 2020-21 campaign, Okposo might be enjoying his most impressive NHL season.

Okposo, who turns 34 on April 16, has scored 18 goals this season, the team’s third-highest total. If he can score twice in the final 12 games, he would become the Sabres’ oldest 20-goal scorer since 37-year-old Dave Andreychuk in 2000-01.

At an age when most players are graying or out of the league, Okposo, who is expected to play his 900th NHL game tonight, is one of the Sabres’ most valuable forwards.

In Sunday afternoon’s 5-3 loss to the Florida Panthers, Okposo opened the scoring and skated 17 minutes, 42 seconds, the most of any Sabres forward.

Okposo has moved all over the lineup this season, skating on scoring and checking lines in addition to earning power-play and penalty-killing duty.

“We’re talking about a National Hockey League player, they have to keep reinventing themselves,” Granato said following Sunday’s game. “Believe it or not, just like a young guy has to keep getting better, the older guy in this league, if he doesn’t find ways to tweak his game and become better, they’re obsolete sooner than later.

“Kyle comes to the rink every day trying to find ways to add to his game and adjust his game.”

While that game has changed over the years, Okposo’s high motor has remained one constant. Granato believes even a novice to the sport could spot Okposo’s dogged determination.

“You could bring your neighbor who doesn’t know anything about hockey and he’s going to see that compete and that work ethic out of Kyle,” he said. “That’s the drive. He’s as passionate about the sport of hockey as he was when he was 17 years old and that drive pushes him through.”

Overall, Okposo has compiled 41 points in 64 games entering tonight’s contest against the Carolina Hurricanes at KeyBank Center. The American hasn’t produced offense at this year’s rate since a 19-goal, 45-point season in 2016-17, his first with the Sabres.

“The end of last year was a good segue into this season for me,” he said. “I’m just going to go play hockey. It’s been nice to get some consistency back and produce at a level I think I’m capable of.”

Okposo has produced with different linemates this season, including beside center Cody Eakin and Zemgus Girgensons. Granato has been utilizing the hard-nosed trio, which he recently reunited after a successful early-season run, to start games.

“That line’s been really, really good for us,” Sabres winger Jeff Skinner said. “They’ve been kind of our rock.”

Late in the first period Sunday, Okposo tipped defenseman Mattias Samuelsson’s shot from the point in after Eakin and Girgensons moved the puck around the zone.

“We just like to grind and move the puck in the offensive zone,” Okposo said. “Some pretty heavy bodies playing against the wall, get the puck up to the point and good things usually happen from there. We just seem to play our best when we’re grinding.”

Sabres goalie prospect Devon Levi will return to Northeastern for his junior season, according to The Buffalo News.

Levi, 20, just enjoyed a dynamic campaign, compiling a 20-10-1 record with a 1.54 goals-against average, a .952 save percentage and 10 shutouts in 32 games. He is a finalist for the Mike Richter Award, given annually to the NCAA’s top goalie.

The Sabres acquired the rights to Levi, a seventh-round pick in 2020, 212th overall, last year in the Sam Reinhart trade with the Florida Panthers.

A rib injury prevented Levi from playing as a freshman. He did, however, star for Team Canada at the 2021 World Junior Championship. Earlier this year, he earned a roster spot on Canada’s Olympic entry but did not play at the Beijing Games.