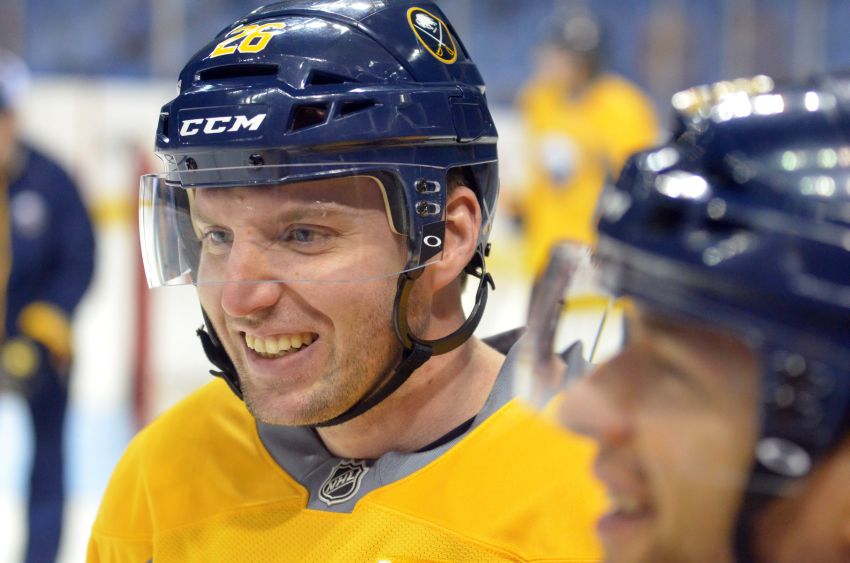 BUFFALO – On Saturday, the struggling Sabres dealt defenseman Jordan Leopold, one of Thomas Vanek’s best friends on the team, to the St. Louis Blues, a move that hardly surprised the winger but “still shocked” him.

“Unfortunately, it’s part of the business,” Vanek said this morning after skating inside the First Niagara Center. “I wouldn’t be surprised if there’s a few more.”

Could Vanek, a franchise cornerstone, be dealt?

Sabres general manager Darcy Regier said Saturday he would consider trading core talent prior to Wednesday’ deadline. Vanek, whose muscle strain will sideline him again tonight against the Boston Bruins, has a team-best 16 goals and 33 points. The Austrian would bring a huge return.

“I think every year you think about that,” Vanek said about getting traded. “But obviously this year probably more than any other year because of the position we’re in, one year left on my contract.”

Goalie Ryan Miller and Jason Pominville also have one year left on their contracts after this season. With the salary cap going down next season, it could be tough to keep all three.

“You never like to,” he said. “I think I’ve raised my family here. I enjoy where I’m at. But I understand the situation here. I’m not sure I’ve talked to anyone what their plan is. Again, it’s something you can’t control. Again, it could happen.”

“I’m comfortable where I’m at,” he said. “But I would like to know what the direction is.”

Any player, Vanek said, wants to know the direction his team is heading. Clearly, the 29-year-old doesn’t want to experience a long rebuilding process.

“I’m sure nobody likes to call their team a rebuilding team,” Vanek said. “But if that’s the phase, if it’s one year, that’s OK. But if it’s a two-, three-year plan, you would probably look in the other direction. It’s a long ways away.”

He added: “Rebuild is not a bad word. It’s just which direction you choose to go.”