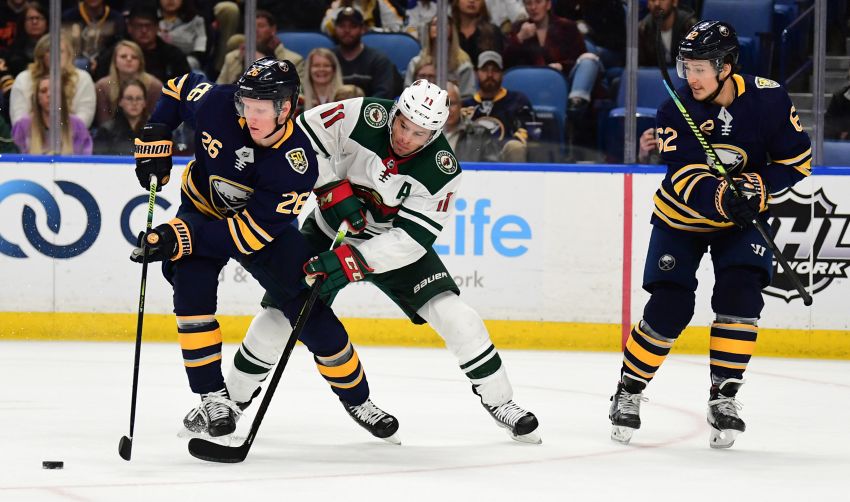 BUFFALO – A week before Thanksgiving, the same team that started the season 8-1-1 has already fallen apart. Right now, having lost eight of their last nine games, the Sabres are reeling.

The Sabres can deny it all they want, but it feels eerily similar to last season, when they won 10 straight games in November before imploding and missing the playoffs.

“Listen, we’re not talking about last year,” captain Jack Eichel said following the Sabres’ ugly 4-1 loss to the Minnesota Wild before an announced crowd of 15,522 on Tuesday inside KeyBank Center. “This is a new year. I’ll just leave it at that.”

But the Sabres will never escape their past until they start winning again for more than a few weeks or a month.

“I would just say that’s something that we have to prove, that it’s not,” Botterill said of the Sabres experiencing the same type of disappointing season.

Botterill said before the game he’s “actively looking” to find a forward to help the injured-depleted Sabres.

“But we also are very happy with how our players have come up from Rochester and played so far,” said Botterill, whose team played without five forwards Tuesday.

But how happy can Botterill really be?

Forget, however, about any injuries. Botterill probably needs to make a deal or deals to ignite or overhaul his hapless club.

Shortly after Botterill’s chat, the Sabres fell behind 2-0 before the first period ended.

Eichel was so ticked off he jumped Joel Eriksson Ek, briefly fighting the Minnesota center. Neither, however, received a major penalty, so Eichel still doesn’t have his first official NHL fight.

“Things haven’t been going our way,” said Eichel, who received four minutes for roughing. “Just trying to spark some energy.”

It didn’t help. The Wild went up 3-0 before Sabres defenseman Brandon Montour scored in the waning minutes.

“It’s a saying, ‘Whatever doesn’t kill you makes you stronger.’ That’s what we’re grasping onto here.”

Krueger said all the Sabres are “all angry today.”

“But just my spontaneous reaction, I don’t think it’ll change much when I sleep on it, is this group is fighting to find a way out of this and this momentum at the moment,” he said.

So what could Botterill do? He wouldn’t exactly be dealing from a position of strength.

“We want to be cap compliant, and we understand these players are going to coming back,” he said.

The Sabres should have a fresh face in the lineup soon in Zach Bogosian, who has missed the entire season after undergoing hip surgery in late April.

“We’re optimistic that sometime on the road trip (this week or next) he’s going to be able to play,” Botterill said. “For all of us, that’ll be a great moment. I think Zach has worked extremely hard to come back from his injury. I think he’ll be a big boost to our team.”