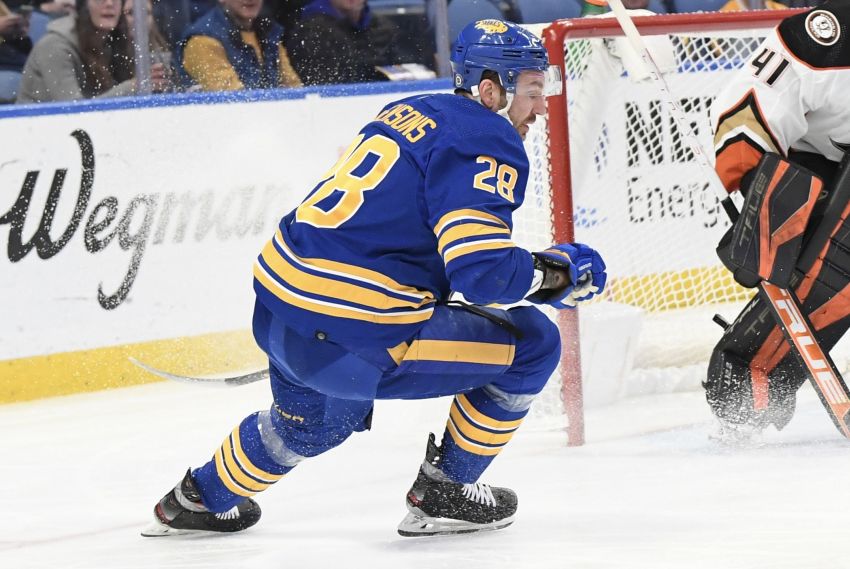 BUFFALO – The uncertainty Sabres winger Zemgus Girgensons experienced after he left the lineup in late January wore on him. The Latvian’s lower-body injury was related to the hamstring problem that forced him to miss all of last season.

“It was definitely mentally tough at the start where I kept going back and forth with how long I would be out,” Girgensons said following Tuesday’s practice at LECOM Harborcenter. “It brought back flashbacks from last season. But in the end, I knew I was coming back, and there was no doubt in my mind I would be back by the end of the season.”

Girgensons, out the last 18 games, will likely return for Thursday’s road contest against the Edmonton Oilers, the start of a three-game trip.

“I expect him to be ready to go,” Sabres coach Don Granato said. “He looked good.”

Granato put Girgensons at left wing Tuesday beside center Cody Eakin and Kyle Okposo, reforming a line that was one of the Sabres’ steadiest earlier this season.

“Oh, it’s awesome, we had a good start of the season as a line,” said Girgensons, who hasn’t played since Jan. 25.

Okposo said he likes looking to his left and knowing Girgensons is there.

“I always know what he’s going to do,” he said. “He’s such an important part of our group and he brings so much energy and compete.”

With Girgensons practicing on a line, winger John Hayden skated as an extra. The Sabres on Tuesday afternoon also waived center Mark Jankowski, who has been a healthy scratch 10 of the last 11 games.

Removing Jankowski from the roster would create a spot for Girgensons.

In other injury news, Granato said defenseman Casey Fitzgerald likely won’t accompany the Sabres on the road. Fitzgerald suffered an upper-body injury in a fight Thursday.

Fitzgerald did not practice Tuesday and missed Sunday afternoon’s 5-2 win over the Toronto Maple Leafs at the Heritage Classic.

“You see we have extra bodies and no sense rushing him back,” Granato said of Fitzgerald. “And we’ll probably turn to the guys that are reintegrating. A couple more defensemen went through practice, Butcher and Miller, and … they’re gearing up toward game shape. And I’m comfortable with where they’re at.”