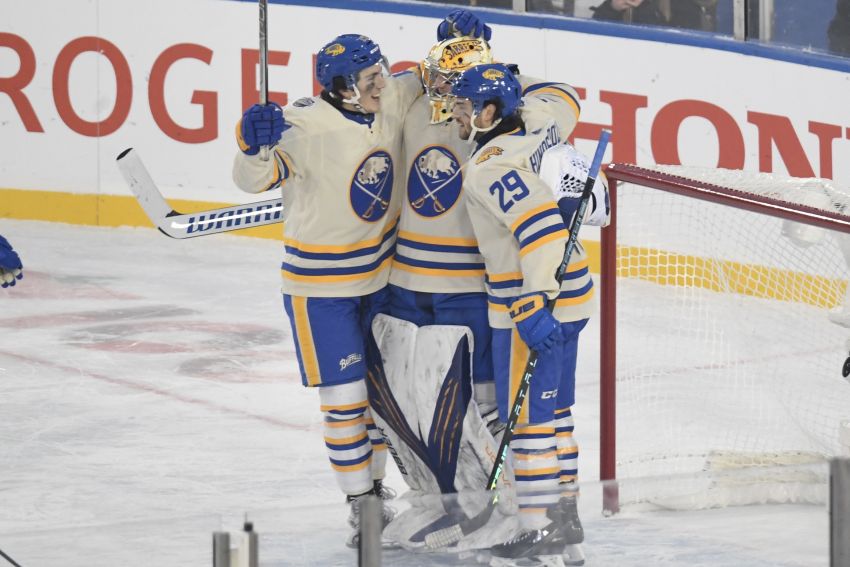 “Great goaltending,” Anderson chimed in under his breath following Sunday afternoon’s 5-2 win over the Toronto Maple Leafs, offering his take as he “coughed.”

Anderson’s antics elicited laughs from Krebs and the media while further illustrating how close the Sabres have grown this season.

Krebs, 21, was born about eight months before Anderson, 40, began his pro career. The winger arrived in the Sabres organization Nov. 4 and did not play his first game with Anderson until Jan. 29.

But barely six weeks later, they’re interacting like they’ve known each other for years. Later, as they fielded questions following the Heritage Classic at Tim Hortons Field, Krebs was asked about his second goal of the afternoon.

Krebs scored as Toronto goalie Petr Mrazek’s left skate knocked the nets off its moorings, and it appeared the goal might be called back.

“I’m not sure with the net going off there, but I was hoping for the best,” Krebs said.

After a review, the goal was upheld, and the Sabres went up 4-2 late.

When Krebs finished talking, Anderson said he was “going take the goalie’s side on this.”

“You try to push off the post,” Anderson explained. “From the goalie’s perspective, that’s up in the air. I think I would argue pretty hard as well if I was them on that play, just because the way the goalies play with the skate on post.”

Anderson clearly likes Krebs, a teammate he said “had a big heart.”

“He’s ready to listen and to make improvements and make adjustments in his game,” Anderson said. “He’s not afraid to take criticism. At the end of the day, this guy has his teammates’ best interests at heart and that’s the kind of guy you want battling with you.”

Toronto’s Michael Bunting later hit Cozens, and both players received 10-minute misconducts when they nearly fought. Instead of heading to the dressing room, Cozens waited beside the glass for the game to end so he could celebrate with his teammates.

Following the game, Dahlin said he wanted to talk about “Cuzzy” and that the Sabres are “brothers in the locker room.”

The conditions in Sunday’s game – the temperature was in the 20s, it snowed early and the wind was a factor all day – created what Sabres coach Don Granato called a “real challenge.”

Coaches could only do so much. Once the Sabres hit the ice, they had to take over and react to the weather.

“There’s 82 games in an NHL season,” Granato said. “In 81, it’s pretty simple for the coaches. You know all the elements and you know what the players are dealing with. And a game like that, I can tell you right now the players take over. You can think you did something as a coach, but all the different elements out there that both teams had to play under and fight through, they’re going to determine the outcome, not your coaching strategy. It’s just there’s too many different elements they’re taking in every moment with the wind, the sun, the cold, the ice conditions.

“So that was fun to watch for me to be a part of because our team had to take over where we couldn’t give them things as a coach that you normally would be able to. There just weren’t those consistencies tonight.”

Anderson became the oldest goalie to win an outdoor game and only the second netminder to earn three outdoor victories, joining ex-New York Rangers star Henrik Lundqvist, who was 4-0-0 before retiring.

Sunday’s win was the 301st of Anderson’s career, tying him with Mike Richter, another former Rangers star, for 37th on the all-time list.

Notes: Krebs became third rookie to have a multi-goal outing in an outdoor game, joining Matthews and Anthony Mantha, both of whom scored twice at the 2017 Centennial Classic. … The Sabres became the second team to have multiple players score twice in in an outdoor game. In addition to, Krebs and winger Vinnie Hinostroza recorded two goals. Yanic Perreault and Richard Zednik each scored twice for the Montreal Canadiens in the 2003 Heritage Classic. … The Sabres, who begin a three-game road trip Thursday against the Edmonton Oilers, had Monday off.