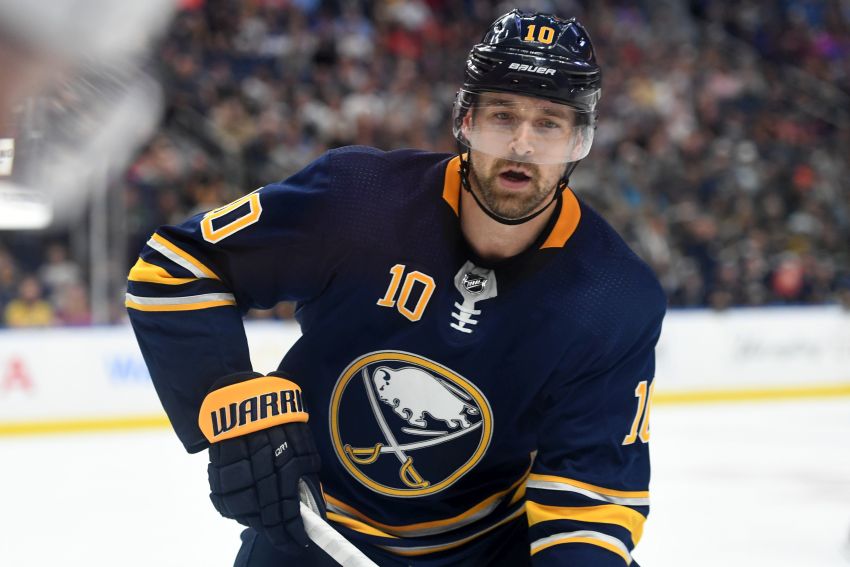 BUFFALO – As Sabres forward Patrik Berglund began struggling this season, the reality of his hefty contract began to set in.

Not only does Berglund have a $4.7 million salary and a $3.85 million cap hit this year, he has three more seasons remaining.

The Swede, 30, performed so poorly he morphed from the Sabres’ second-line center into a healthy scratch by the seven-game mark. When he played, he often skated short minutes on the fourth line.

How would the Sabres deal with one of the NHL’s worst contracts? Well, it turns out Berglund took care of it himself.

On Wednesday, the Sabres placed Berglund on unconditional waivers for the intent of terminating his contract.

Update: Berglund has cleared, according to reports.

After Berglund failed to show up for the team’s flight to Washington on Friday, the Sabres suspended him indefinitely for failure to report to the team.

In the days before the suspension, when Berglund had apparently left the team, Sabres coach Phil Housley said the veteran was sick.

Assuming Berglund clears waivers today – he almost certainly will – the Sabres can officially ditch him.

Berglund’s hit for the remainder of the deal, including $2,235,484 this season, would come off the Sabres’ cap, according to capfriendly.com.

Incredibly, Berglund would lose $12,579,032 by having his contract terminated, according to the site.

In a two-sentence press release, the Sabres said they would have “no further information or comment at this time.” The team had Wednesday off before flying to Washington, where they will practice today and play the Capitals again Friday.

The cap space Berglund’s exit would create is valuable to the Sabres, who will have to award 25-goal winger Jeff Skinner, a free agent following the season, a massive contract if they want to keep him.

Berglund, part of the Ryan O’Reilly trade with St. Louis on July 1, seemed to acclimate to his new team quickly after 10 seasons with the Blues.

During the preseason, Sabres captain Jack Eichel called Berglund “The Godfather.” Berglund then started the season as one of the team’s top forwards.

But Berglund struggled from the get-go. He also battled an injury and was benched again. He was rarely seen around the team’s dressing room. He had only eclipsed 15 minutes of ice time twice in his last 17 appearances.

In 23 games this season, Berglund compiled two goals, four assists and a minus-5 rating. He hadn’t played since Dec. 8, missing the last five games.

“The combination of his lack of speed and quickness along with his heart not being in it makes him not a very effective player,” said one scout who has watched Berglund regularly this season. “Works out for the Sabres to get out from under that contract.”

The NHLPA is grieving the difference between Dotchin’s new contract with the Anaheim Ducks.

In November, the Montreal Canadiens also terminated winger Tomas Plekanec’s deal, allowing the center to go home to play in the Czech Republic.