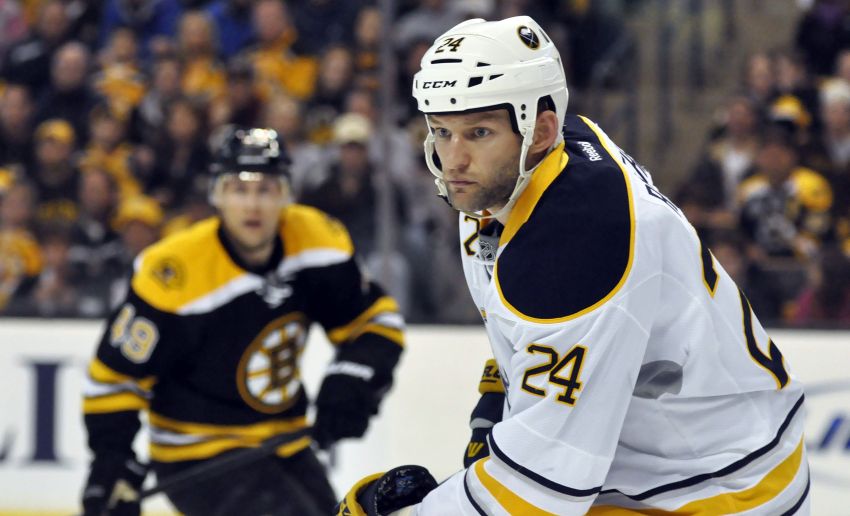 AMHERST – Even as promising signs kept emerging from the NHL and the Players’ Association’s marathon collective bargaining sessions earlier this week, Robyn Regehr never felt a deal was close to ending the 84-day lockout.

“Personally, no,” the Buffalo Sabres defenseman said Friday inside the Northtown Center, a day after the once-promising talks imploded spectacularly at a New York hotel. “I think a lot of players and a lot people kind of have felt that way at different parts of this process.”

It’s not that Regehr’s a pessimist. In fact, the 32-year-old veteran still believes the 2012-13 season will eventually be played in some form. He just feels “all along there really hasn’t been a fair deal on the table that can be cut.”

“It’s very one-sided,” Regehr said about the NHL’s offers. “I think that all along (NHL commissioner) Gary (Bettman) has taken a very confrontational approach to this. He’s got a plan in place, and I believe he’s got some sort of date in mind that they can get a shortened season in.”

A seething Bettman denied Regehr’s claims Thursday during an animated and memorable 32-minute news conference in which the commissioner became so angry he began shaking.

Bettman, who had been sitting out negotiations, spoke at the Westin in Times Square after NHLPA executive director Don Fehr had painted a rosy picture for reporters, saying agreements had almost been reached on key issues and a full deal could be agreed to soon.

Around 6:30 p.m. Thursday, many hockey observers felt the lockout could be over within days.

But as Fehr, who had just rejoined negotiations, was talking, NHL deputy commissioner Bill Daly left a message on NHLPA special counsel Steve Fehr’s phone. The league was denying the union’s latest offer and pulling the concessions it had made earlier in the week, most notably the $300 million “make-whole” portion, money that would ease the switch to a new CBA.

The players, who had been negotiating with some owners, then stopped speaking to the media before Fehr held a second news conference.

It all made for a bizarre day that will likely live in NHL lore forever.

Regehr blames the NHL for creating the false hope.

“I think it’s been the same all along,” Regehr said. “The league tries to give the players and public hope and tries to play on emotions by creating what they view as an opportunity for the season to start when really it hasn’t been that close.

With no new talks scheduled and some players surely becoming antsy to play, Regehr believes the NHLPA still has a united front. The NHL’s last offer shouldn’t have been taken to a union vote, he said.

“Sometimes you get caught up in it, especially the guys that thought all along there’s a deal to be cut,” Regehr said. “Those are the ones you just have to talk to and say, ‘Listen, this is the way the process goes. The league is playing on your emotions as a player trying to get you to come over and take the deal that’s best for them.’”

Regehr, who participated in earlier talks, doesn’t think the NHL has truly removed its offer.

“Really, what does that matter?” he asked. “We still need to find the agreement that’s the right fit for everyone involved. So, really, all the other stuff on the way to that is just noise.”

Daly has said the NHL needs:

– A 10-year CBA with a mutual reopener after eight seasons; the union wants eight years with an opt-out clause after six.

– No compliance buyouts, meaning contract buyouts must count against the salary cap.

The five-year contracts limits are “the hill we will die on,” Daly said.

Why is the ability to sign long-term contracts so important to players? Regehr said it creates “flexibility in the system” and the ability “to maneuver.” Players can “gain a little bit of freedom” following a great season.

“They’re able to be fairly compensated for that performance,” Regehr said. “I think the league wants a very simplistic … (slotting) of players. There’s no leverage given toward the players whatsoever.”

Regehr used Sabres owner Terry Pegula, who has spent tens of millions of dollars on his team since purchasing it in 2011, as an example of someone who could be harmed by limiting contract lengths.

“If you have an owner, for example, like we do here in Buffalo that came in (and said), ‘I want to change this team around. I want to start to build something here.’ They’re very limited on how they can do that,” Regehr said.