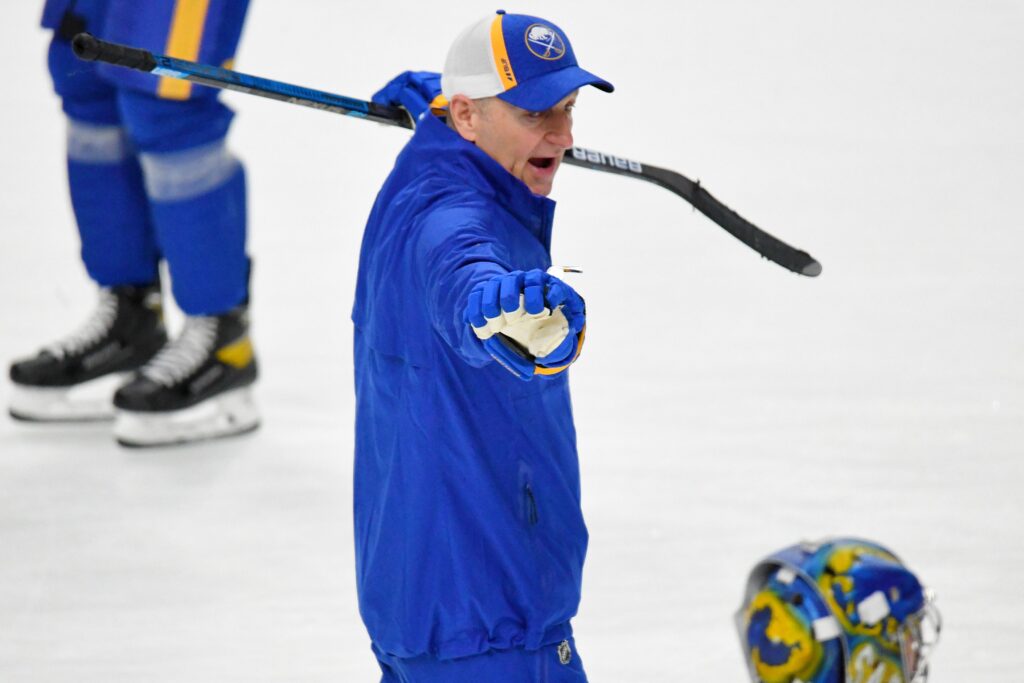 Ralph Krueger has no problem wearing a mask on the bench. ©2021, Micheline Veluvolu

So far, 10 days into training camp, the Sabres haven’t experienced any setbacks because of COVID-19.

But on Friday, the NHL announced six Dallas Stars players and two staff members had tested positive for the virus. The outbreak forced the team to close its facility and three games to be postponed.

The Columbus Blue Jackets, meanwhile, held out 17 players from Friday’s practice because of what they called “an abundance of caution and in accordance with NHL COVID-19 protocols.”

Then on Saturday, the Pittsburgh Penguins canceled practice and issued a similar statement. Later in the day, the Los Angeles Kings announced five players would be “unfit to participate” in a scrimmage.

“It wasn’t a matter of if, it was when,” Sabres coach Ralph Krueger said of COVID-19 stymieing teams. “It was a question of who and there’s no guarantees with this virus but we’re going to continue to stay on the very distinctive path that we’re on right now. This helps to confirm it for the players. You can just never let the guard down against the COVID or it will smack you.”

Krueger said seeing teams having to shut down or practice with a limited squad “deepens the understanding” for how well the Sabres prepared for the season. He believes the Bills’ experience dealing with COVID-19 offered a valuable blueprint.

“Nobody here has done anything other than embrace what has been asked of them,” Krueger said on a Zoom call prior to Saturday’s intrasquad scrimmage. “The players and staff have been amazing. And when we hear Pittsburgh’s practice being canceled today, it’s highlighting the importance of maintaining the path we’re on right now – the mask-wearing, the separation, the spacing, the short and quick meetings, the big meeting space we have outside.”

The NHL will require coaches to wear masks on the bench during games this season, something Krueger said he and his staff will have no problem doing.

“I’m a big, big fan of supporting the players moving forward and reinforcing positive energy on the bench during the game,” he said. “So that is not my primary coaching space. Between periods, on days between games and or the morning of games is when I like to focus on the teaching and learning process. So it’s not going to affect very much for me personally.

“And we as a coaching staff like to have a calm bench, we like to have a bench focused on the next situation versus holding the players in the past. So it’s not really an issue. And from a health perspective, we completely understand it.”

The COVID-19 pandemic has decimated revenue for teams, so the NHL is allowing the ads this season.

Krueger said forward Andrew Oglevie suffered a lower-body injury and is day-to-day. Oglevie did not play in Saturday’s scrimmage at KeyBank Center.