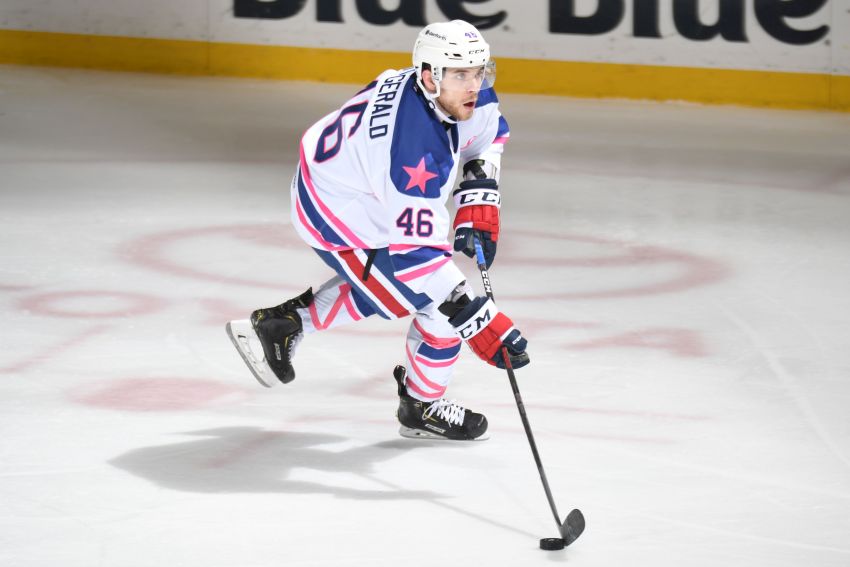 “He just said, ‘Good scrap, you didn’t get that from me, you got that from your mother,’” Casey Fitzgerald said of his father, who played 1,097 NHL games. “I got a good laugh from that. It was good to see him after, have him here.”

Tom Fitzgerald fought just seven times during his 17-year NHL career, according to hockeyfights.com, so he probably didn’t pass down any fighting skills.

The Fitzgeralds – another son, Ryan, plays for the Boston Bruins’ AHL affiliate in Providence – are known for their skills and smarts, not their fists.

Casey Fitzgerald, a Boston College graduate, said he had only fought one other time, way back in junior hockey.

“Other than than, not much,” the defenseman said Monday after the Prospects Challenge rookie tournament ended. “Four years of college, you kind of forget about that. It was a good fight.”

He added: “It was exciting to get the first one out of the way.”

“He just told me he thought I played well, keep playing my game,” said Casey Fitzgerald, a third-round pick in 2016, 86th overall. “But he’s here on business.”

The 5-foot-11, 185-pound Casey Fitzgerald, 22, has quietly developed into one of the Sabres’ top defense prospects. He began his pro career with the Rochester Americans late last season, compiling one goal and three points in four games.

“I try to … play fast, move pucks up ice and jump up in the play when I can,” said Fitzgerald, who won a gold medal with Team USA’s 2017 World Junior Championship squad.

“But just playing that kind of simple game and that 200-foot game is kind of what I pride myself in.”

“All weekend watching these guys compete, it was almost like a playoff series here,” Fitzgerald said. “Everyone was just ready to go. There’s so many studs on the back end that are just bringing their game and just bringing that energy that we need.”

The Sabres, who trailed 4-1 at the time, scored before the period ended and two more times early in the third to tie the game.

“There was a lot of energy going on bench,” Fitzgerald said. “I’m glad I could kind of play my role and give that spark if we needed it.”

Fitzgerald also laid a strong strong hip check along the boards earlier in the 6-4 loss to the Penguins.

The Sabres sent seven players from their Prospects Challenge roster, including forward Brett Murray, to Rochester training camp on Tuesday.

The camp begins later this month.

The Sabres drafted Murray in the fourth round in 2016, 99th overall.

The Sabres also sent forward Lukas Rousek and goalie Matthew Welsh back to their junior teams. In addition, they released forwards Stephen Harper, Bobby MacIntyre and Sebastian Vidmar from their tryouts.