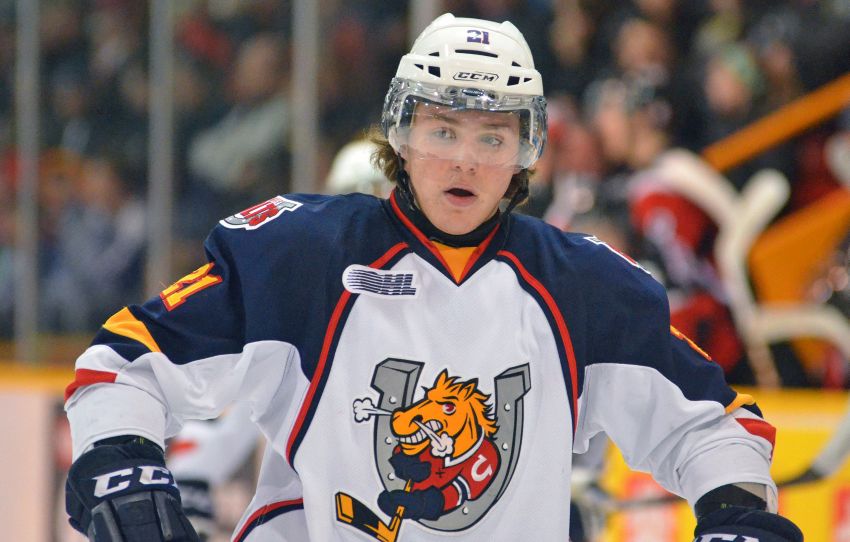 BUFFALO – Brendan Lemieux understands junior hockey is a special, once-in-a-lifetime experience. The three or four years, the Sabres prospect has been told, are “definitely the best time of your life.”

“I know why they say that,” Lemieux, the 31st pick by the Sabres in June, said by phone Tuesday. “I’m having a blast in junior. We’re on a high right now. We’re on a winning streak.”

The gritty, high-scoring winger already has 29 goals in 32 games, a torrid 57-goal pace. His first-place Barrie Colts have won seven straight games and are primed to make a run in the Ontario Hockey League playoffs.

“I definitely I want to get 50 or more,” Lemieux said. “Right now, I’m worried about our team winning. I’ve never been a big stat guy. But 50 goals is a prestigious number to hit in junior.”

Lemieux’s excited about challenging for the Memorial Cup. His voice sounds like he’s ready for the postseason to start immediately.

Still, the 18-year-old wants his three-year junior career to end.

“After the season,” Lemieux said, “my goal is to go into training camp and make the team.”

That team, of course, is the Sabres.

“There’s really nothing more I’ve been thinking about,” he said. “I don’t plan on playing another year of junior. That’s always been my goal is to play in the first two years. The AHL’s a great league, but my goal has always been to play in the NHL. So I definitely want to be able to step right in if I can. That’s what’s this year’s about.”

This has been a breakout year for Lemieux, who ranks third in OHL goal scoring despite having played six fewer games than London’s Mitchell Marner and Erie’s Alex DeBrincat. Lemieux scored 27 times in 65 appearances last season.

“To be honest, to be sitting here talking about 50 goals halfway through the season, I didn’t foresee that … considering I had 27 last year,” Lemieux said. “I made goals 40 and 40. I wanted 40 goals and 40 assists in the beginning of the season.”

Lemieux only has 11 assists, so he likely won’t reach one goal. But he has transformed himself into an elite offensive threat.

Teams know the 6-foot-1, 210-pounder can be a physical agitator like his father, legendary NHL pest Claude Lemieux. Now, they’re seeing a different side of the younger Lemieux.

“I think it’s great that people are seeing that side of me, that I can be an agitating third-line, fourth-line forward,” he said, “but that I can also step up and play with the big guys on the first power play, play in front of the net and be a simple guy playing with skilled players. I think that’s a game that might not show early in my pro career but I want to have in the bag for later on.”

This season hasn’t been perfect. Last month, Lemieux was upset he couldn’t earn an invite to Team Canada’s world junior championship camp. In June, he was crushed when he dropped out of the first round.

Each slight has fueled Lemieux.

“I don’t think I have a chip on my shoulder, but it definitely motivates me,” he said about falling in June. “The draft year is gone and past.”

Lemieux, the first pick of the second round, has quickly developed into one of the best prospects in an organization stocked with top young talent.

The Sabres awarded Lemieux a long look during training camp, even playing him in an exhibition game. The entire experience was “incredible,” he said. Lemieux shared a dressing room with Sabres center Torrey Mitchell, someone he used to play video games with when his father played in San Jose six years ago.

“It was surreal for me,” Lemieux said.

Nonetheless, Lemieux “definitely left disappointed” when the Sabres sent him down.

“I definitely wanted to make that team,” he said. “I felt like I wasn’t that far off. I like to think everything has a purpose. I’m definitely glad I’m back in junior. … I’m just going to be that much more ready when it’s time for me to step up when the team’s ready for me, not when I’m ready for them.”

His coach, Hall of Famer Dale Hawerchuk, has been grooming Lemieux since 2012. Lemieux calls the Sabres legend a “second father.”

“I’m a strong personality,” Lemieux said, “and Dale’s really been great with teaching me to be the best teammate I can be, best leader I can be. … Dale’s been incredible with me. He’s brought my game to a whole new level. … He’s shown me that if you play the game the right way, you’re going to have success at this level and the next. If you cheat and you do things the wrong way, you may score more goals or get points, but you’re not going to have success at the next level.

“So he’s never been superficial in just wanting success in junior for me, he’s always wanted the big picture from me, which is being able to translate into being a good pro.”