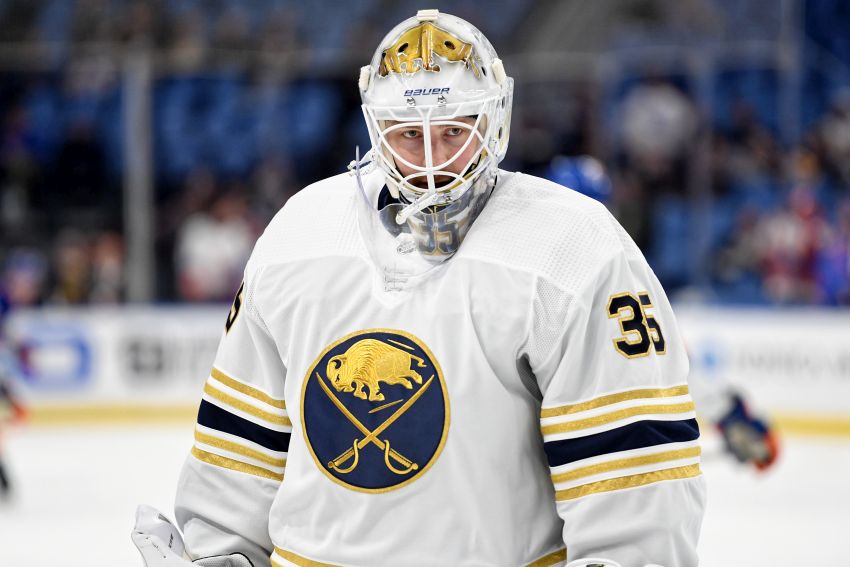 BUFFALO – When the Sabres visit Stockholm later this week, Swedish goalie Linus Ullmark would like to show his teammates something special in the historic city.

“Two wins,” said Ullmark, who backed up Carter Hutton for Saturday’s 1-0 loss to the New York Islanders inside KeyBank Center.

Ullmark’s words underscore that while an in-season trip to Europe might be special, the Sabres plan to take it seriously.

The Sabres, who leave for Sweden today, play the Tampa Bay Lightning on Friday and Saturday. The four points available to the upstart team against its Atlantic Division rival could be precious.

“It’s business first,” said center Marcus Johansson, one of five Swedes on the Sabres. “It’s two important games for us. We have a few days before where you can kind of enjoy your family and friends, but it’s focus on what we’re there to do.

“Even if you have friends and family in town here, they all know that hockey comes first, and that’s the way it’s going to be this week, too.”

The Sabres, of course, will have time to do some sightseeing. Ullmark said he’s excited to “show the boys our beautiful capital back home.”

“It’s not often you get to show your teammates where you’re from, and Stockholm is a very beautiful city,” he said.

Johansson is the only Swedish Sabre to have played an NHL game in his homeland.

Johansson, 29, never thought a contest like that would happen.

“It’s very special,” he said. “It’s cool to be able to go home and play in Sweden in front of friends and family. Something you haven’t even dreamt about growing up is playing an NHL game in Sweden, so I’m very fortunate to get to do that again.”

Soccer is Sweden’s most popular sport. Still, Ullmark said “there’s a lot of discussion” hockey is the country’s national sport.

“(Soccer is) bigger, there’s more people playing it, it’s a more popular sport in that sort of sense,” he said. “But we’ve had a lot more success when it comes to hockey. So it’s a very well-respected thing to do back home. I would say it’s (a) top-two (sport).”

Ullmark, who grew up in Lugnvik, a town of several hundred about five hours from where the Sabres will play, Ericsson Globe, has a top spot in Stockholm.

“Old town is one of my favorite spots,” he said of Stockholm’s original city center, which features cobblestone roads and 17th- and 18th-century buildings.

Ullmark said the area is “very” cozy” and “very upbeat.”

As expected, defenseman Brandon Montour and winger Jimmy Vesey returned from their injuries Saturday, pushing John Gilmour and Evan Rodrigues out of the lineup.

Fresh off Friday’s ugly 6-1 road loss to the Washington Capitals, Sabres coach Ralph Krueger made the most significant changes to his lines and defense pairs this season.

Meanwhile, Vladimir Sobotka, who spent the first month beside Johansson and Skinner, moved to left wing with center Casey Mittelstadt and Conor Sheary, a spot Vesey occupied before getting injured.

“We’ve been really true to our lines through the 13 games and we felt a little refreshment would give us some energy in the offense,” Krueger said. “It didn’t quite work out today, but again, sometimes, when you get new linemates, you trust the system and the principles of play within the group a little bit more. You speak about those and just get a fresh conversation going.”

“Brandon was really strong in showing what he’s able to do here,” Krueger said. “It was a tough game. The Islanders play a tough, tough, persistent kind of style. We thought he adjusted well and added nicely to the offense, too.”

On Saturday, the Sabres held their first decades night to celebrate their 50th anniversary, honoring the 1970s.

Twenty-three former players attended, including former captain and defenseman Jim Schoenfeld, who stepped down from his job as a senior vice president and assistant general manger with the New York Rangers in May.

Schoenfeld, 67, said he had been planning on retiring for three years.

“You get to a certain age and you just start to weigh time,” Schoenfeld said. “We had five or six grand kids and three of our four children live in Arizona.”

Schoenfeld, who lives in Arizona, said he kept thinking about how long he could stay away from his family.

“That’s sort of what it comes down to,” he said of his decision to retire.