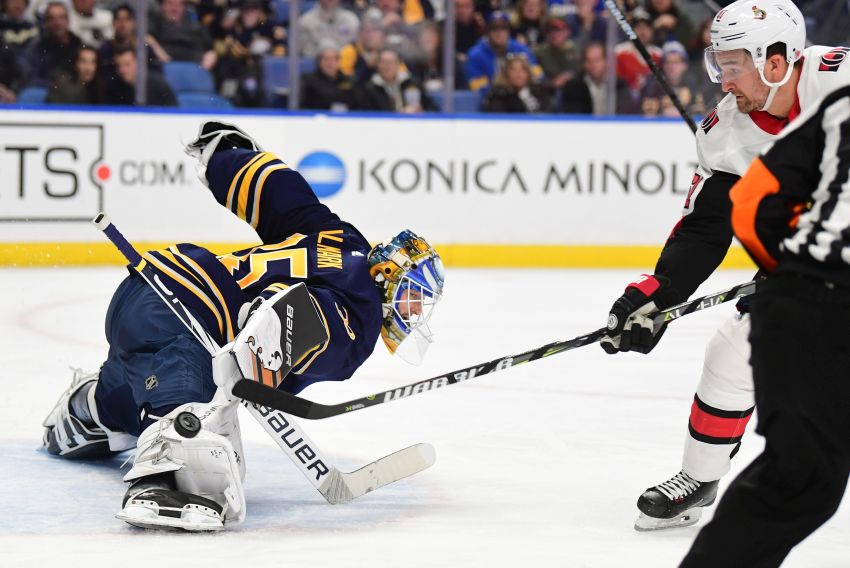 BUFFALO – Watching your teammates throttle an opponent and pile up goal can be a negative and positive experience, Sabres goalie Linus Ullmark said.

“It’s both boring and really fun,” Ullmark said after making 27 saves in Saturday afternoon’s 9-2 win against the Ottawa Senators. “We had some really good goals today and guys battling up front, so that’s a lot of fun for me when I’m seeing that. …

“I’m happy as long as we’re not giving up opportunities.”

Ullmark received little action in the opening minutes as the Sabres pounced on the Senators. When he faced more action later on, he responded.

“I thought he played strong,” Sabres coach Phil Housley said. “It’s tough, we had some spells there where we were in the offensive zone and we were controlling play and he didn’t see a lot of rubber. He stopped that breakaway in the second, he made some big saves at key times early in the game for us.”

Ullmark made his best save in the second period, stopping Mark Stone’s breakaway with his right pad or skate.

“I have no idea,” the Swede replied when asked how he stopped it. “I think I saved it.”

Ullmark, 25, improved to 3-0-1 with a 2.00 goals-against average and a .935 save percentage in four games this season. Saturday was his first start at KeyBank Center this season.

“My games have been, in my mind, a lot easier than some of Hutt’s games, so I don’t take anything for granted,” Ullmark said. “We had opportunities today and we buried nine of them.”

“He’s going to get more of an opportunity,” Housley said. “The schedule dictates it.”

Sabres defenseman Rasmus Dahlin left the game in the second period after blocking a shot with his foot.

Housley said the Sabres will know more today. He said the rookie would accompany the team to New York.

In his 14th NHL game, Dahlin, 18, recorded an assist, his fifth point.

Prior to the game, Housley said Dahlin, the first overall pick, has been “doing a really good job.”

‘He’s played a lot of hockey,” Housley said. “You go back to the draft and everything he’s been involved in, it’s been a grind for him. We’re going to try to give him the best minutes we can, but I think this is all part of his experience and development as a player.”

Since Oct. 13, Sabres winger Jeff Skinner has enjoyed the best 10-game stretch of his career, scoring nine goals (second in the NHL over that span) and 16 points.

The Sabres made one lineup change, inserting winger Evan Rodrigues for Remi Elie.

Sabres center Casey Mittelstadt scored 13:13 into the third period with the crowd singing “Sweet Caroline,” which he said was “cool.”

“I did not even hear that,” Mittelstadt said.

Defenseman Erik Burgdoerfer played for the Senators, his first NHL game this season and fifth overall. Burgdoerfer, 29, made his first two NHL appearances with the Sabres in 2016-17.

As we celebrate Jason Pominville’s 1,000 @NHL games, the memories over the years come rushing back.