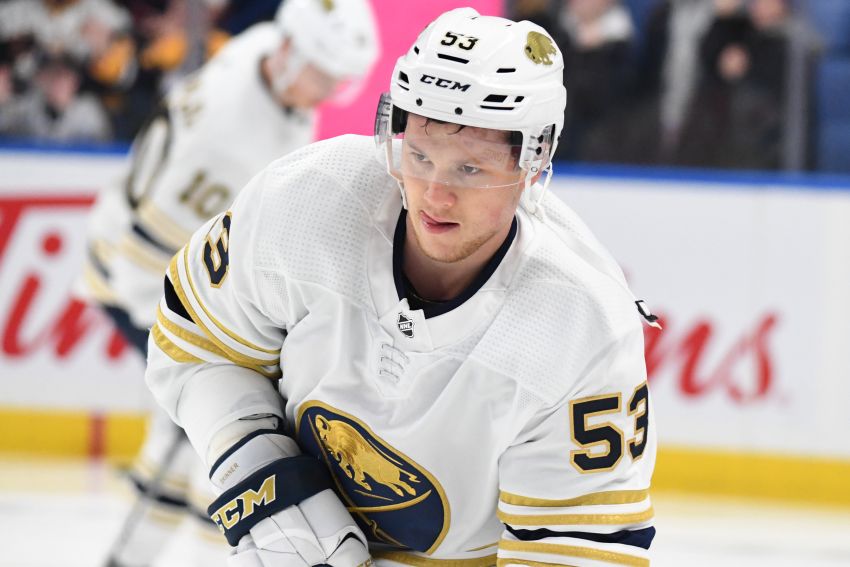 PITTSBURGH – After ending his career-long 23-game goal drought, Buffalo Sabres winger Jeff Skinner said he did not really feel a sense of relief.

“I felt pretty good,” Skinner said after scoring 5:39 into the third period of Saturday afternoon’s 5-2 win over the Penguins. “I don’t know. I feel like I scored a few times and usually it feels pretty good. I don’t know.

“You can use ‘relief,’ I guess, if that sort of fits the story line because of how long it’s been. I don’t know. I just feel happy to get another goal and add to the lead a little bit more.”

In good times and bad, Skinner, 27, usually showcases the same demeanor, rarely getting too high or low. While discussing his first goal since in 82 days, he sounded the same as a did a year ago talking about his exploits during his first 40-goal season.

“It’s been a while for me, obviously,” Skinner said inside PPG Paints Arena. “Whenever it’s been a while it’s nice to get one. I’m just happy I could contribute to the win.”

Fresh off a career season, Skinner enjoyed a terrific start. After scoring his 11th goal in his 28th appearance on Dec. 2, Skinner was on pace for a 32-goal season.

Then he suddenly stopped scoring.

Remember, Sabres coach Ralph Krueger has kept Skinner and captain Jack Eichel, his center a year ago, separated all season. Even as the marathon slump hit months, Krueger refused to reunite them.

Skinner played with center Curtis Lazar on Saturday. However, Marcus Johansson, his center most of the season, fed him the puck in the third period, allowing him to redirect the puck past goalie Tristan Jarry.

“This group really cheers for each other,” he said. “You could see the faces. Jeff’s beaming but everybody else, too, and cheering loud. So let that be the beginning of some momentum for him.”

Eichel said of Skinner’s goal: “It was huge. It seems like he was all over it tonight and he had a couple good chances. It’s really big for our team.”

An upper-body injury sidelined Skinner, who’s in the first year of an eight-year, $72 million contract, 10 games during his slump.

Eichel, who had a maintenance day from practice Thursday, is clearly nursing an injury. He did not take any faceoffs against the Penguins.

Instead, linemate Sam Reinhart replaced him, winning only five of 14 draws.

Is Eichel’s absence in the faceoff circle related to his maintenance day?

“There’s really no conversation around it,” Krueger said. “We know that Jack had a maintenance day. We know that it’s that time of year. We’re just playing it safe. We got Sam who can take draws really well and Curtis.

Notes: Eichel, who scored twice Saturday, is the sixth Sabre in the last 40 years to hit the 35-goal mark in 60 games or fewer. Saturday was Eichel’s 60th appearance. … Sabres defenseman Rasmus Dahlin, who assisted on Eichel’s second goal, has compiled one goal and seven points during a career-long six game-point streak. … The Sabres scratched defenseman John Gilmour and forward Evan Rodrigues (both healthy).