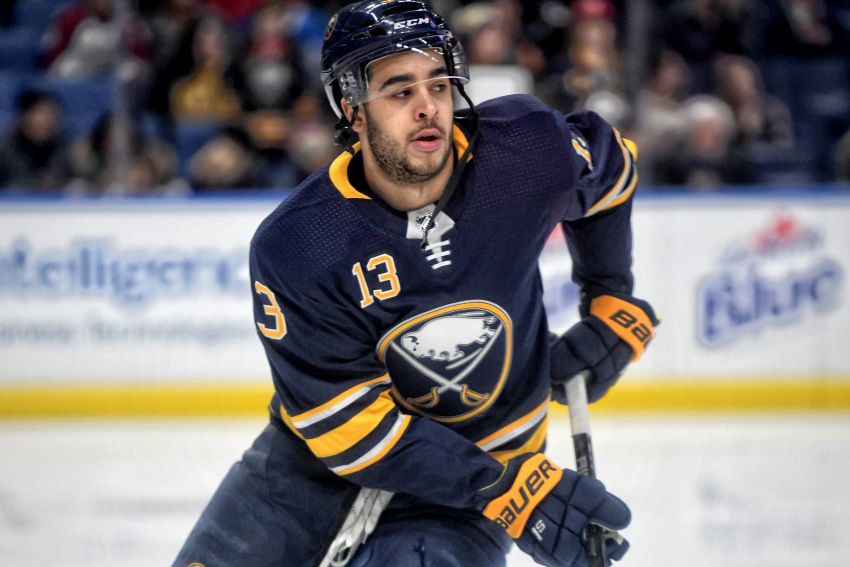 BUFFALO – In the NHL, Sabres winger Nick Baptiste often skates short minutes on the fourth line, a role much different than the one he enjoys in the AHL.

But Baptiste, 22, has embraced his job as a fourth-line checker during his recalls to the Sabres this season, scoring two goals in nine games.

“I’ve been doing real well with the role I’m in right now,” Baptiste said this afternoon following the Sabres’ optional practice inside KeyBank Center. “I think obviously with increased minutes, I’ll be able to contribute offensively a little more. But I think right now, I’m doing the little things right.”

In Tuesday’s 5-3 win over Tampa Bay, Baptiste opened the scoring 6:25 into the tilt, zooming to the net and converting Zemgus Girgensons’ nifty feed.

Sabres coach Phil Housley said he wanted to play Baptiste more against the Lightning, although power plays and penalties limited him to seven minutes, 36 seconds.

“Nick has done a terrific job when he’s been up here, he’s used his speed to create, you could see the goal in Vancouver (Jan. 25), the goal last night, using his powerful speed just coming off the start,” Housley said. “Also, I think his wall play has really, really improved. That’s why he’s getting shifts late in the third period.”

Baptiste’s speed, of course, is a major asset in today’s NHL.

“I’m just using my speed and being physical and taking the puck wide and making it tough on their D,” said Baptiste, who has played 23 NHL games. “Whether I’m playing eight minutes or 18 minutes here or in Roch, wherever I am, I’m trying to do the same thing, use my speed effectively and create speed that way.”

Baptiste has also provided some critical secondary scoring. The Sabres have won two of their three games without injured center Jack Eichel (ankle), in part, because third- and fourth-liners have contributed key goals.

Winger Scott Wilson, for example, has two goals in the last three games.

“It’s great, it takes some pressure off the other guys,” Housley said of secondary scoring. “It’s important, when you’re playing really good teams, it’s a great way to contribute, just feel good about yourself.”

The Sabres play Thursday in Ottawa.