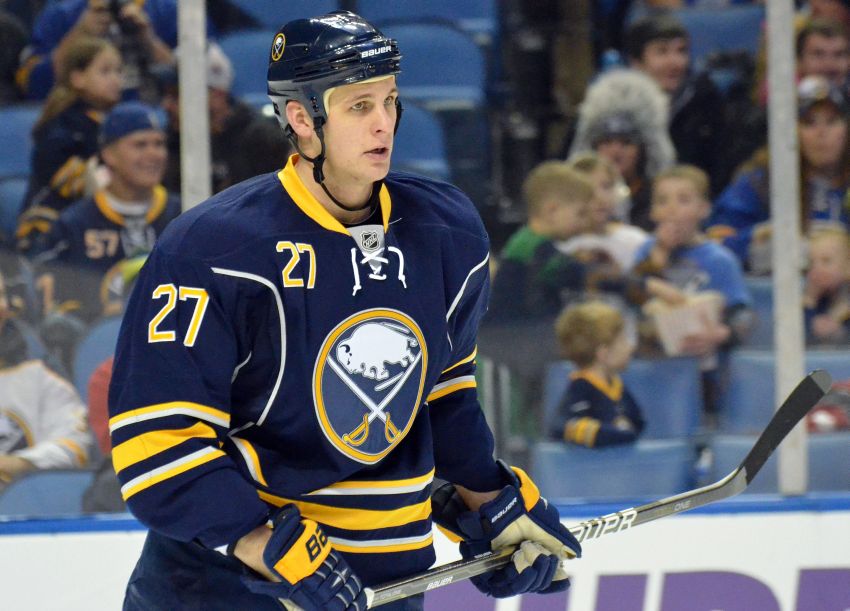 BUFFALO – Adam Pardy couldn’t handle his difficult situation in Dallas last season. Becoming a spare part and clashing with his coach wore the Sabres’ new defenseman down mentally. Going to the rink every day became tough.

Following the season, Pardy felt “embarrassed for myself as a player, as a person,” he said. The 28-year-old had sat 44 times as a healthy scratch and even went back to the minors briefly. The negative experience gnawed away at him.

Then, on July 2, the Sabres acquired Pardy from the Stars with winger Steve Ott.

“I’ve been excited ever since,” Pardy said Sunday inside the First Niagara Center after the first training camp session. “Coming in here now, it’s a new start, it’s a new team, it’s a new conference – a whole new outlook on the game this year. So I’m excited about this start here.”

Still, waiting around during the 113-day NHL lockout wasn’t easy. Pardy wondered about his contract – one year and a prorated $2 million remains – and the on-ice chances he would receive this season.

But when the work stoppage ended and Pardy hit the ice Sunday, “all that just seemed to kind of go to the side.”

“It’s exciting to be back on the ice and doing what I grew up playing and what feels good again,” Pardy said.

Pardy, who spent his first three seasons in Calgary, has a tough battle ahead during this week’s shortened camp. He’s one of nine defensemen vying for seven or eight spots.

“I think what’s obvious is we have nine guys that can play,” Sabres coach Lindy Ruff said.

Even if he cracks the roster, he could be watching in the press box again early. All the other defenders in camp played for the Sabres last season. It’s also possible the Sabres took Pardy just to get Ott and plan to bury his salary in the minors.

“If I can reach my potential and play to the best way I know I can, that’s all I can worry about,” Pardy said. “I can’t worry about what the other guys are doing. It’s going to be a healthy competition, I’m sure.”

What kind of player is the 6-foot-4, 220-pound Newfoundland native?

“More or less a defensive defenseman,” said Pardy, who has four goals and 29 points in 183 NHL games. “That’s what I’ve always been coming through. I’ve always tried to be chipping in on the offensive side. You look back on my stats you’re not going to see a lot of points there.”

Ruff added: “Pretty well a stay-at-home (defenseman). He’s got good mobility. But he’s a defender that moves pretty well for a big man.”

So what happened during his first and only season with the Stars?

The problems started early. After a strong camp, Pardy was injured, missed the first four games and never recovered. He finally played twice before sitting again. But he never broke the cycle.

“I talked to the coach, he explained things,” Pardy said. “I just said, ‘You know what, I understand what you’re doing, but just be honest with me. If you’re going to sit me if I’m not playing well enough, just sit me.’ The communication, I felt like there was no honesty. He wasn’t being a straight-shooter to me. …

“We … can take criticism. We can handle if somebody yells at us. We’re grown men. I just felt like it didn’t go well. Things got off on the wrong foot. Everything just kind of snowballed. One thing led to another.”

Pardy sat 10 straight games during the winter before the Stars sent him on a two-game “conditioning” assignment. He watched five more when he returned.

Everything took its toll, and Pardy said he never possessed the right mindset.

“There was good games, bad games, but consistency’s the biggest part,” said Pardy, who made only 36 appearances. “You lose confidence, and things just kind of start to go downhill after that. You got to move on. You got to learn from that. … Things didn’t go how I planned them.”

Now he has a fresh opportunity.